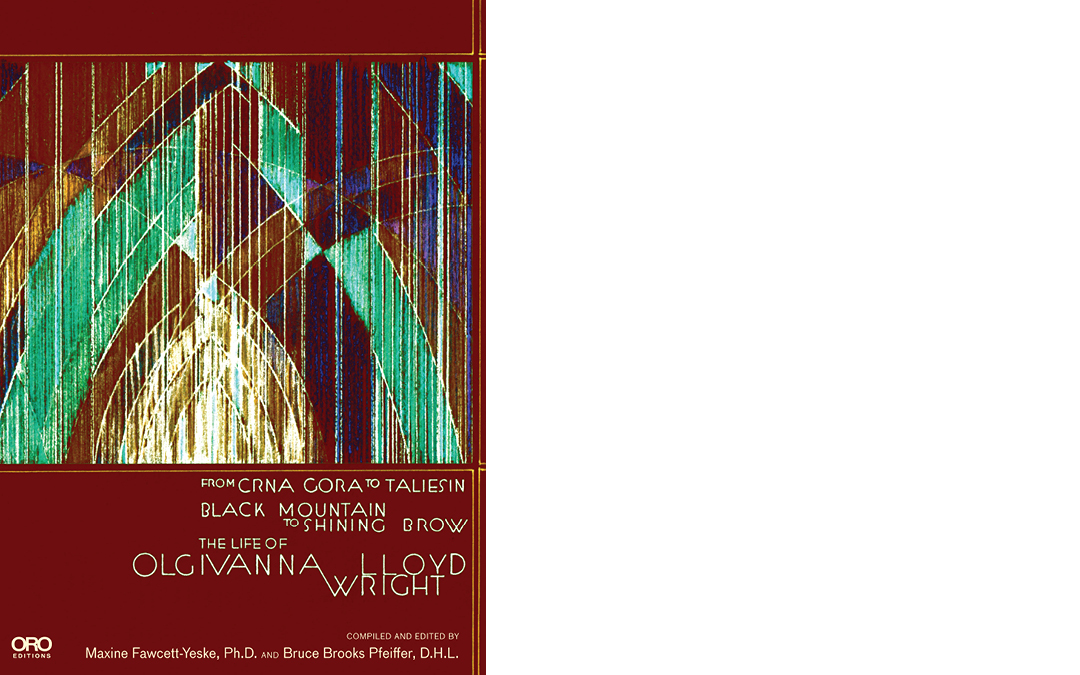 Frank Lloyd Wright would surely have approved of this beautifully produced book – a work of art in itself, with its striking design, its profuse number of illustrations (both black and white and full colour), and its use of glossy, high quality paper. The story of his wife’s life, told in her own
words, is a remarkable one.

Indeed, the editors undertook a formidable task in bringing this autobiography into print. Olgivanna started writing her autobiography in 1956, beginning with her childhood in Russia, but she had only reached the year 1931 when she stopped writing. Following her husband’s death in 1959, she turned to the archives of the Frank Lloyd Wright Foundation, of which she was President, to locate the material she needed to complete the task. From this material, and several other published books and unpublished manuscripts, ‘it was possible to develop a rich and varied account of her life as told completely in her own words’ (9). The editors’ comprehensive annotations throughout the volume do much to extend our knowledge and understanding of this extraordinary life.

Olga Ivanovna Lazovich was born into a well-to-do family in Montenegro on 27 December. She was never certain of the exact year of her birth; the United States social security records gave it as 1896, whilst her obituary in the New York Times listed it as 1898. At the age of nine, her older sister Julie, who had married a rich Russian, took Olgivanna to live with her in Russia – staying in Moscow and St Petersburg – with summer trips to their villa on the Black Sea in Georgia. Just before the outbreak of the Russian revolution she married the Russian architect Vladimir Hinzenberg, with whom she had a daughter, Svetlana. The marriage was not a happy one and it was during this turbulent time – both politically and personally – still in Georgia, that she met the first of two men who would alter the course of her life: George Ivanovich Gurdjieff. As the editors note in their clear and concise preface, on first meeting him, ‘a strong sensation of certainty, of illumination, of absolute conviction gripped her. […] Without a moment’s hesitation, then and there, she decided to join his group of followers. […] His aim was to awaken people out of sleep and let them see the truth about themselves. […] In Olgivanna, Gurdjieff found the ideal disciple, flexible, eager to learn, never doubting, never hesitating, never resisting, open, and willing to absorb’ (11).

As soon as the Russian revolution spread to Georgia, Gurdjieff and his followers, including Olgivanna (who had now left her husband) and her daughter, moved to Constantinople, where he set up his first ‘Institute for the Harmonious Development of Man’. After several further moves, they arrived in Fontainebleau-Avon in 1922, Gurdjieff having purchased Le Prieuré des Basses Loges as the Institute’s permanent home. In 1924, Gurdjieff announced to Olgivanna that she could learn no more from him and should go and ‘live her life accordingly’ (11). Her husband, Vladimir Hinzenberg, had emigrated to Chicago a few years earlier, and so she moved to America, to see if it might be possible to salvage her marriage.

It was shortly after her arrival in Chicago that she met the second most influential person in her life: Frank Lloyd Wright. Although he was thirty years her senior, for both of them it was ‘love at first sight’. For four years, whilst waiting for their divorces to come through they lived as man and wife at Wright’s famous house, Taliesin, and Olgivanna gave birth to their child, Iovanna in 1925. Nevertheless, this unconventional lifestyle was frowned on by many, and cost Wright a number of lost commissions: ‘Without work, without income, unable to meet the expenses of their home, Taliesin, they were evicted. Hounded by lawyers and the press, they sought refuge in various places across the country’ (11).

As the editors explain, it was in part thanks to her rigorous training with Gurdjieff that Olgivanna was able to withstand the immense hardships of those harrowing years. Finally able to marry in 1928, the Stock Market Crash, followed by the Great Depression, did little to alleviate their circumstances. In spite of this, in 1932 they set up their school for architects, known as The Taliesin Fellowship – which had been Olgivanna’s idea – with the students known as ‘apprentices’. Part of their training included elements of Gurdjieff’s teachings. She had told Wright ‘that it was not enough to build beautiful buildings; he should train the builders of beautiful buildings. At the same time he would derive inspiration and vitality from the younger people around him’ (12). By the mid-1930s Wright had reacquired an international reputation as one of the most innovative architects of his generation.

Members of the Katherine Mansfield Society may well have read Olgivanna’s reminiscences, ‘The Last Days of Katherine Mansfield’, published in The Bookman in March 1931.1 It is mostly replicated in one of the chapters in this volume, together with a much more detailed and fascinating account of life at the Prieuré:

For several weeks I washed dishes all day long while memorizing daily a long list of English words which I had hung on the wall in front of me. In the evening we met for discussions in the living room of the Prieuré while we started building the Study House, a large hall for the Movements. […] We wheeled wheelbarrows full of dry leaves which we collected in the gardens, and, with frozen hands, I stuffed them as insulation between the inner and outer walls of the building.

Georgivanitch was everywhere, measuring boards, sawing and nailing them down; he was up on the roof using the torch, stepping on precariously balanced beams. We worked until one, two, and sometimes three in the morning. In that super effort there was great satisfaction, and order was being established within. It almost seemed at that time that we lived outside of space and time.

[…] I did not have a dress to change into; I had to wash the dress if I wanted it clean to wear the next day. I had nothing. Wherever we went he forbade us to take more than a small suitcase of clothes. Some – the English people that came, and those who were not as deeply involved as I was, those of whom sacrifices were not demanded – still lived freely […] but I stayed within the walls of that monastery. I lived in it. I worked from five in the morning until the late hours of the night. (52-3)

KM was one of those English people who came in a ‘free’ capacity. Olgivanna records Mansfield’s arrival in 1922:

As I was about to sit down for lunch one day, I saw a woman standing in the doorway of our dining-room looking at each of us with sharp, intense eyes that seemed to burn with a desire, a hunger for impressions. When she went to sit down and eat with us, someone called her to a different dining-room. I wanted to know her. […] I told [Gurdjieff] what a lovely face she had, and how much I liked her. ‘You take care of her’, he said. ‘Help her all you can but be careful of too close proximity – her illness is contagious’. (54-5)

A close bond was quickly established between the two women, and Olgivanna’s friendship brought much happiness to KM in those last few months of her life. On the night of KM’s
death, Olgivanna was summoned by Orage:

‘Please come quickly; Katherine has been taken very ill’. I ran all the way to her room. She was lying down on her bed, with several doctors bent over her. They were going through some hopeless motions with hot water bags. She was dead. This was the first time on my life I had a close experience with death. This was a shock and for a while I walked in a different life, apart from life. I thought of nothing else but the existence of Katherine. (61-2)

Olgivanna’s first-hand account of the last weeks of KM’s life is a very poignant one. Indeed, this whole volume – Olgivanna’s extraordinary life, told in her own words – leaves the reader in awe. Her friendship with Katherine Mansfield was a significant moment in a lifetime of significant moments. I cannot recommend this book highly enough. The astonishing details of Olgivanna’s life will stay with you long after you turn the last page of this beautifully produced volume.