“Early on the partners agreed to handle a diversity of projects, rather than specialize in one area of design.”

When Cyril ‘Cy’ Lemmon opened his architectural office in 1946, his was one of around 40 such practices in the Islands. 75 years later, of those offices only his continues as an integral part of Hawaii’s architectural scene. To stay in business for such an extended period of time, the practice he started so many years ago has undergone many changes, but so too has Hawai‘i. The passage of time has influenced the firm and in turn the firm has given shape to the times.

In May 1946, the 45-year-old Cy Lemmon and his wife, Rebecca, or Robbie, came to Hawai‘i and in June purchased a house at 225 Saratoga Road in Waikīkī, where Trump Tower now stands. Here he set up his drafting table in the garage behind their home and opened for business. For the previous ten years Lemmon had served as a Lt. Colonel in the British Army in India, but he was not a stranger to Hawai‘i. Between 1928 and 1931, he had worked as a draftsman in the Honolulu offices of both C. W. Dickey and Louis Davis, contributing to such projects as the art-deco Home Insurance Company Building and the Mediterranean-revival residence of Dr. Wall in Waimanalo.

Lemmon’s timing to relocate to the Islands was ideal. Not only was there a pent-up, wartime-engendered demand for new buildings, but also Honolulu’s already-growing population was set to experience even greater expansion. From the time Lemmon left Hawai‘i until 1950 the population of Honolulu had increased by 74 percent, and between 1950 and 1969, when he retired, it jumped by another 79 percent.

The ambitious opportunities abounded, despite a shortage of construction materials and draftsmen. As projects came into his office, Lemmon was fortunate to convince Doug Freeth, with whom he had earlier worked in Dickey’s office, to leave his job with the Federal Housing Administration, to work with him, preparing construction drawings and writing specifications. In 1948, Frank Haines, a recent graduate of M.I.T. and Princeton, was recruited, via a cousin who lived on Oʻahu, to come from the mainland to further augment the staff. Both Freeth and Haines would be partners by 1953.

By that time the firm had established a solid reputation for designing in a modern style,”1 that ‘new’ look which is becoming apparent to so many of Honolulu’s new and remodeled shops and stores.” The best of Lemmon’s early buildings featured sleek horizontal lines, sometimes broken by vertical accents, built of rough textured stone contrasting with smooth concrete and large expanses of glass. He popularized the use of Arizona sandstone, a “novel treatment” that was “colorful and architecturally workable,”2 in such early projects as the Boysen Paint Store, Kenrock Building, and Occidental Life Insurance Building, making the thin-lined, horizontal material synonymous with up-to-date modern design, reaffirming the Islands’ eligibility in its quest for statehood.

Another decidedly modern building, the Waikīkī-Kapahulu Library, was not only the firm’s first major public works project, but also brought Waiʻanae sandstone back into the public eye as a modern building material. Following its appearance in the library, this local material joined lava rock as a means to instill a regional flair into Hawai‘i’s mid-century buildings, including the Kaimuki branch of Bishop Bank (now First Hawaiian Bank), which the firm also designed. 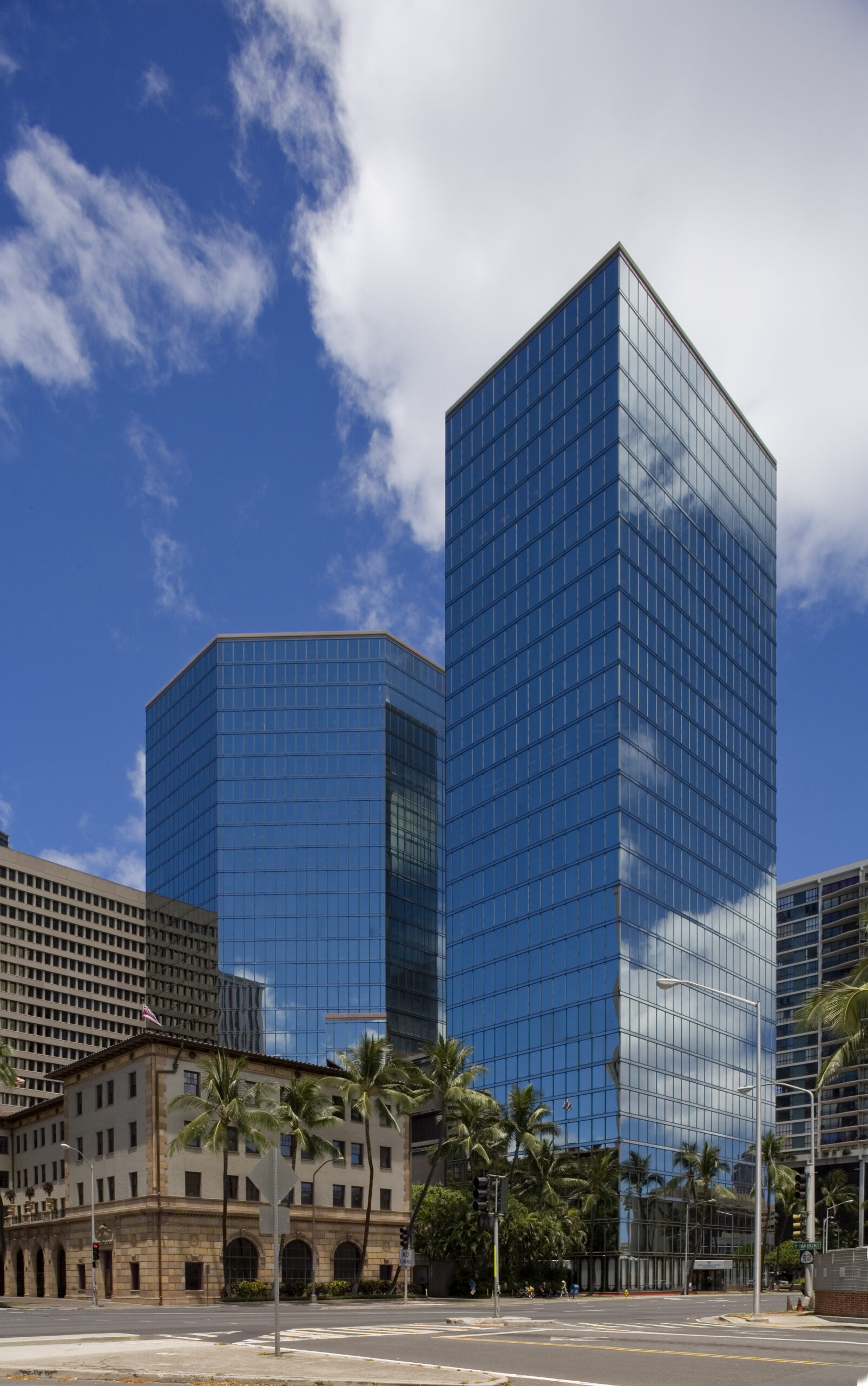 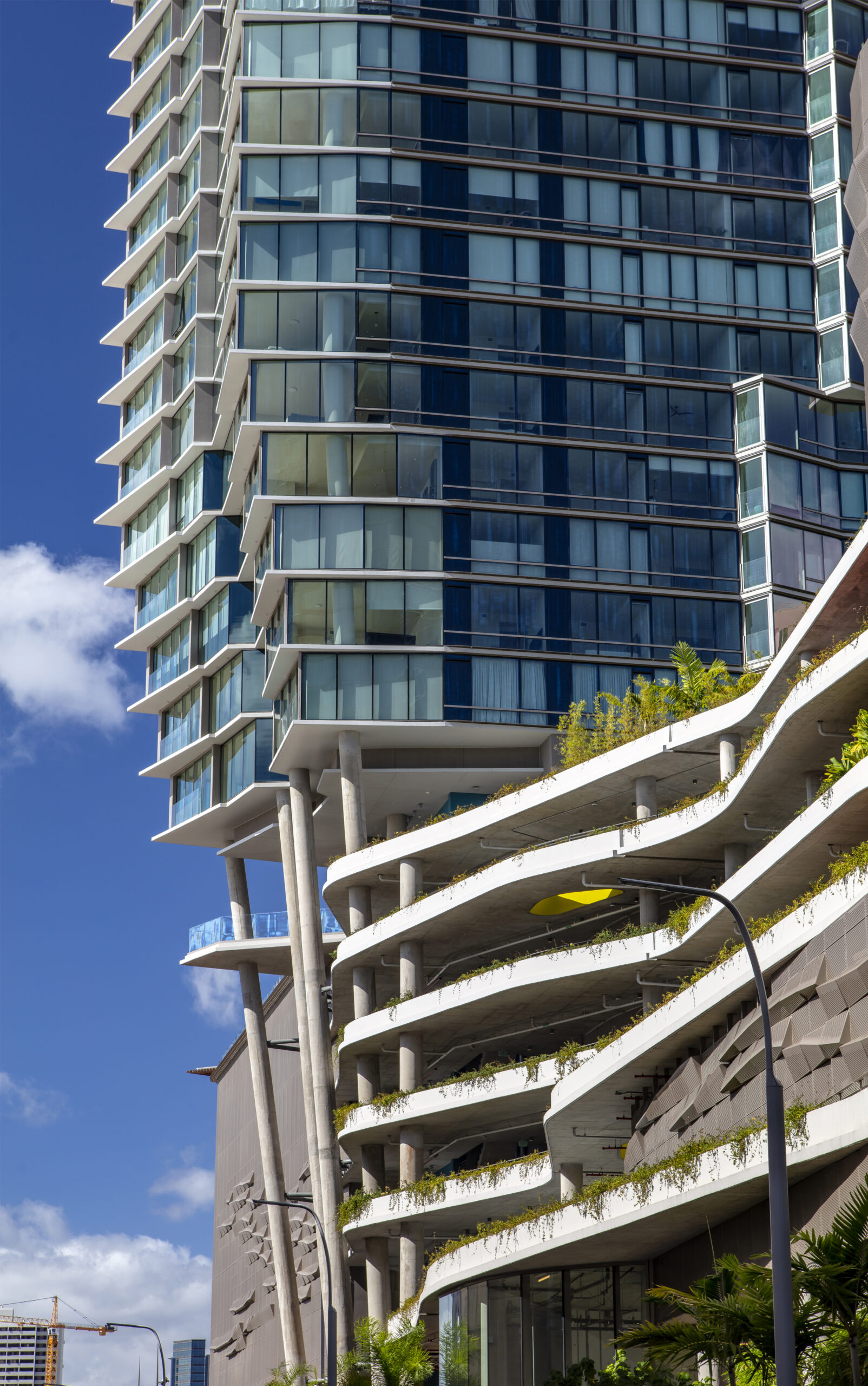 “Early on the partners agreed to handle a diversity of projects, rather than specialize in one area of design.” 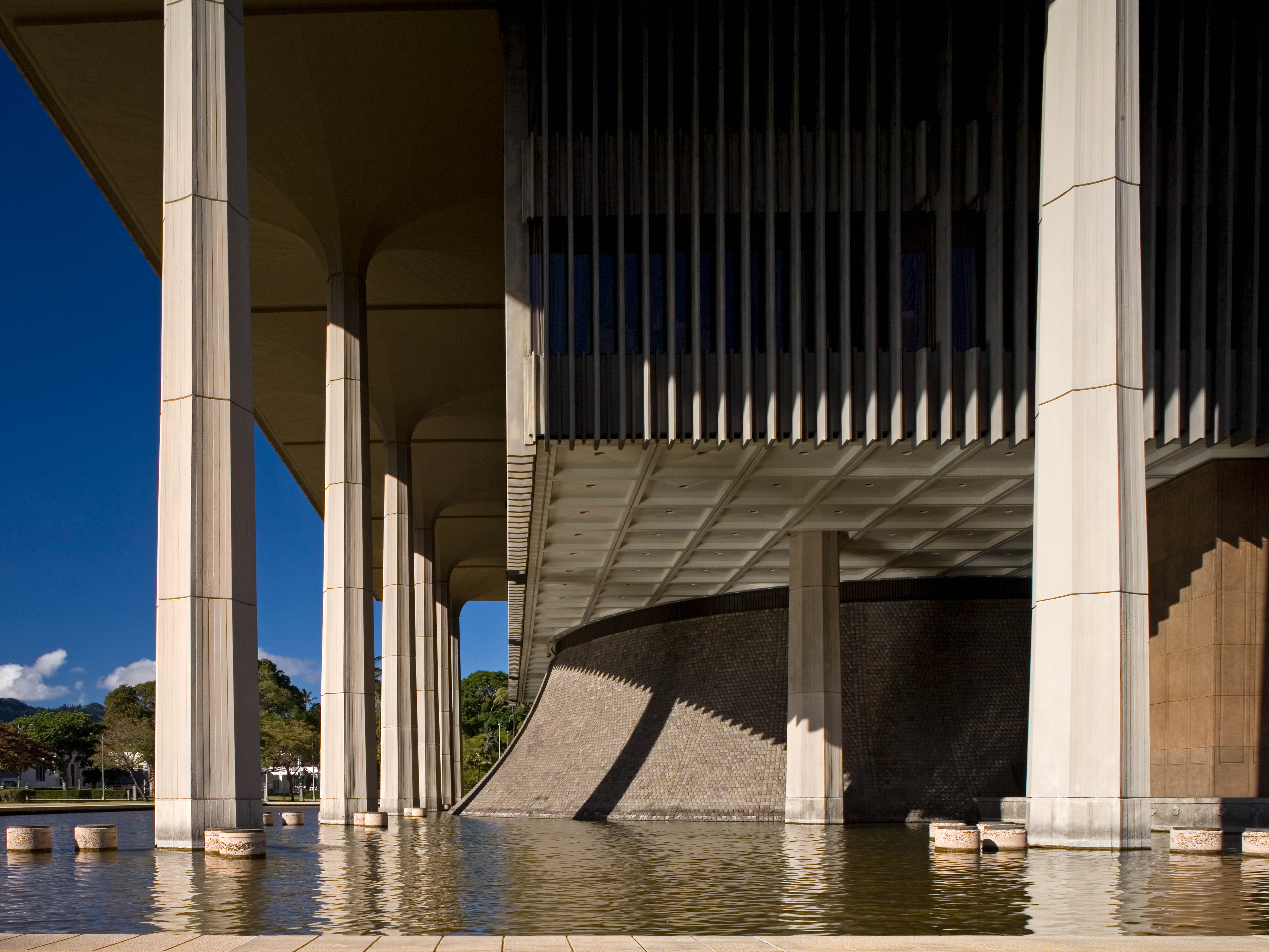 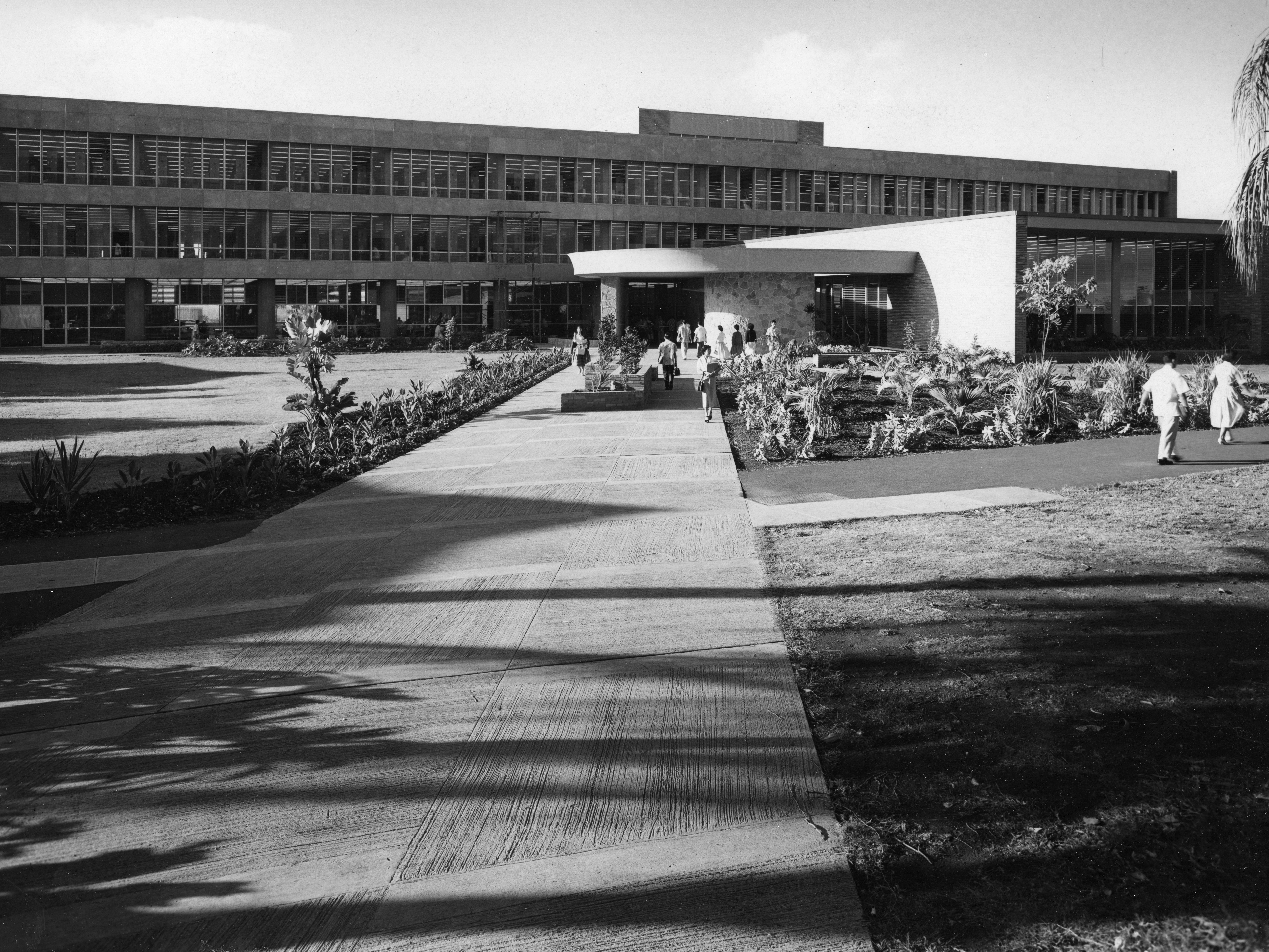 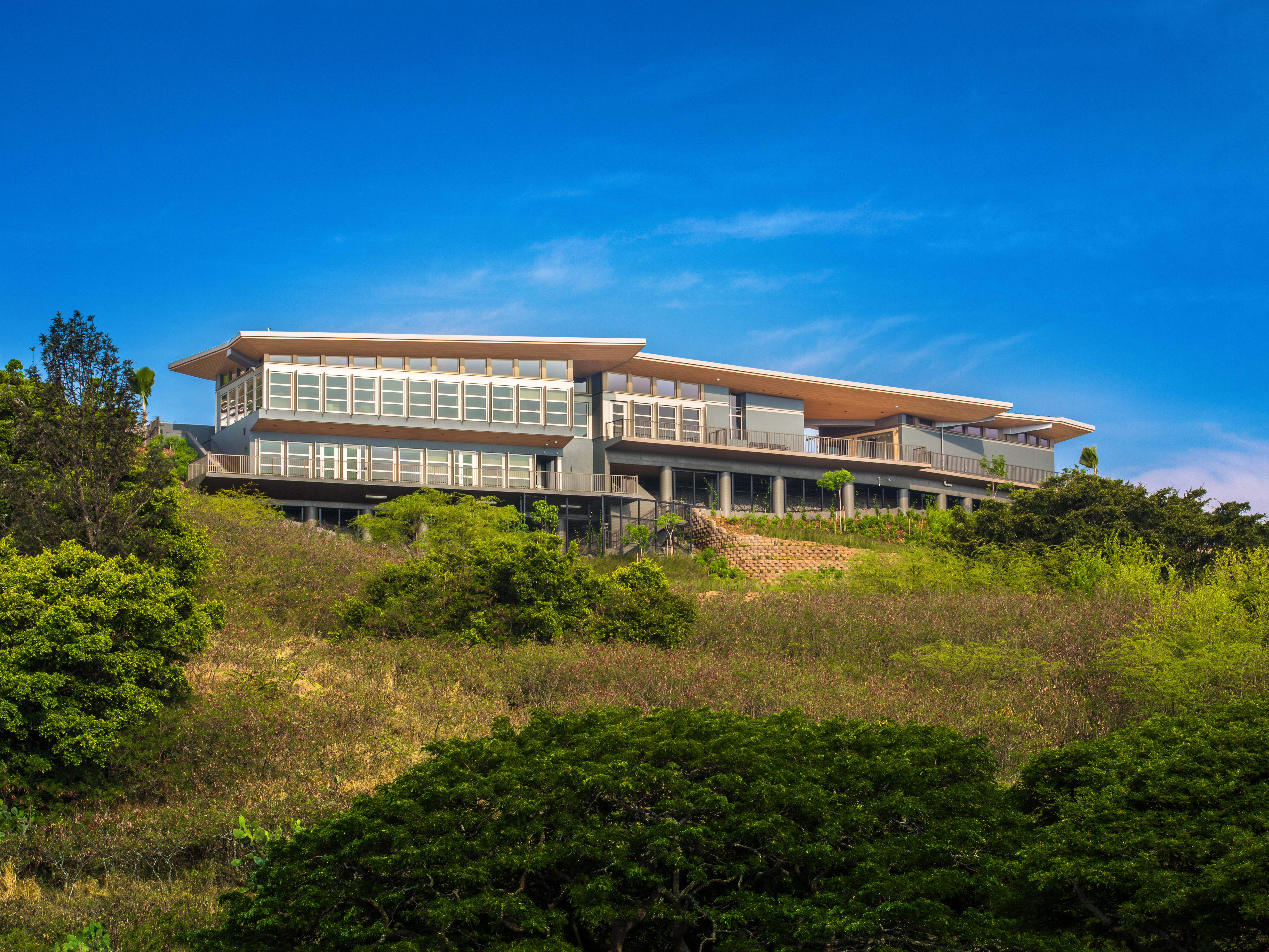 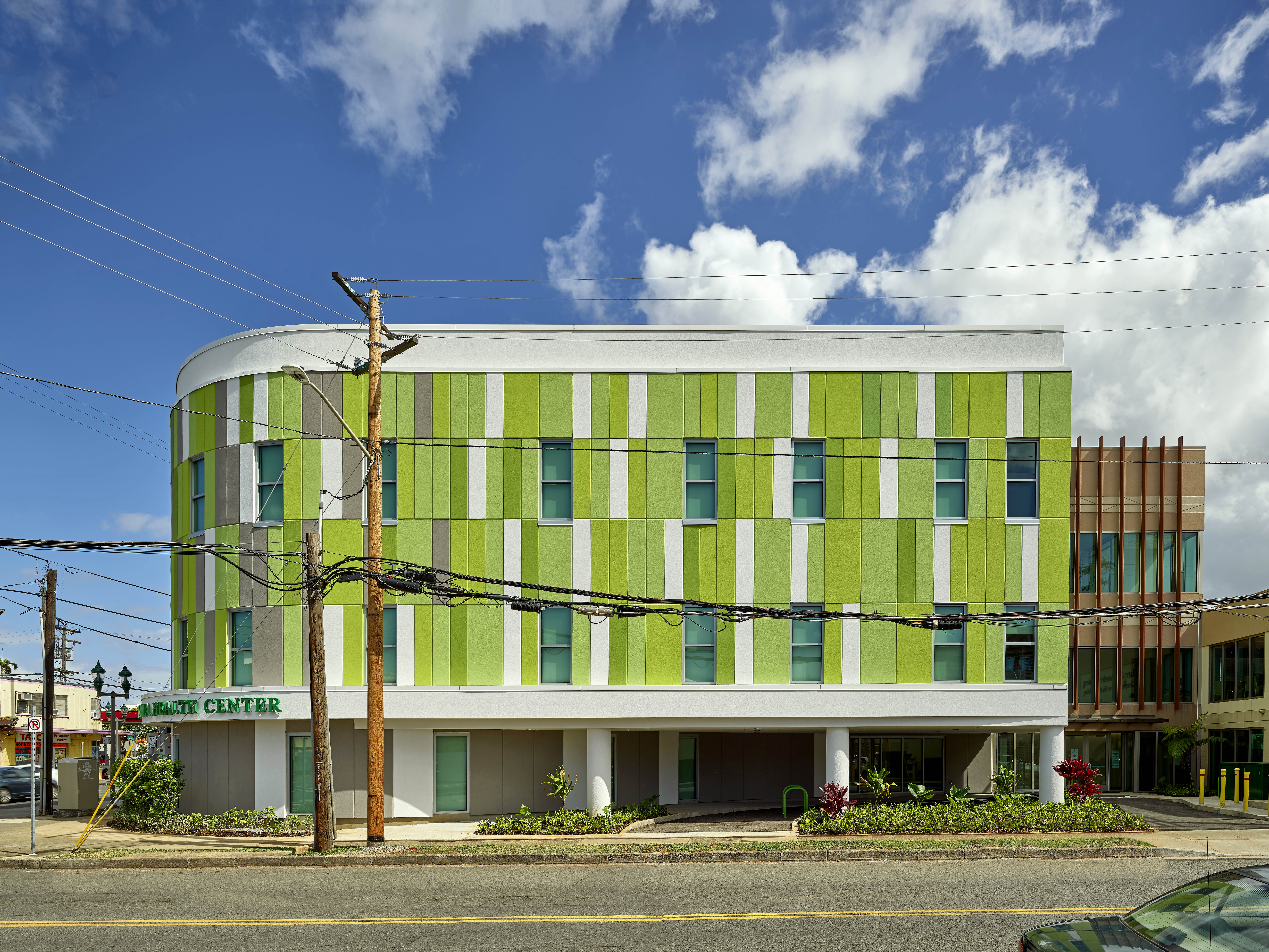 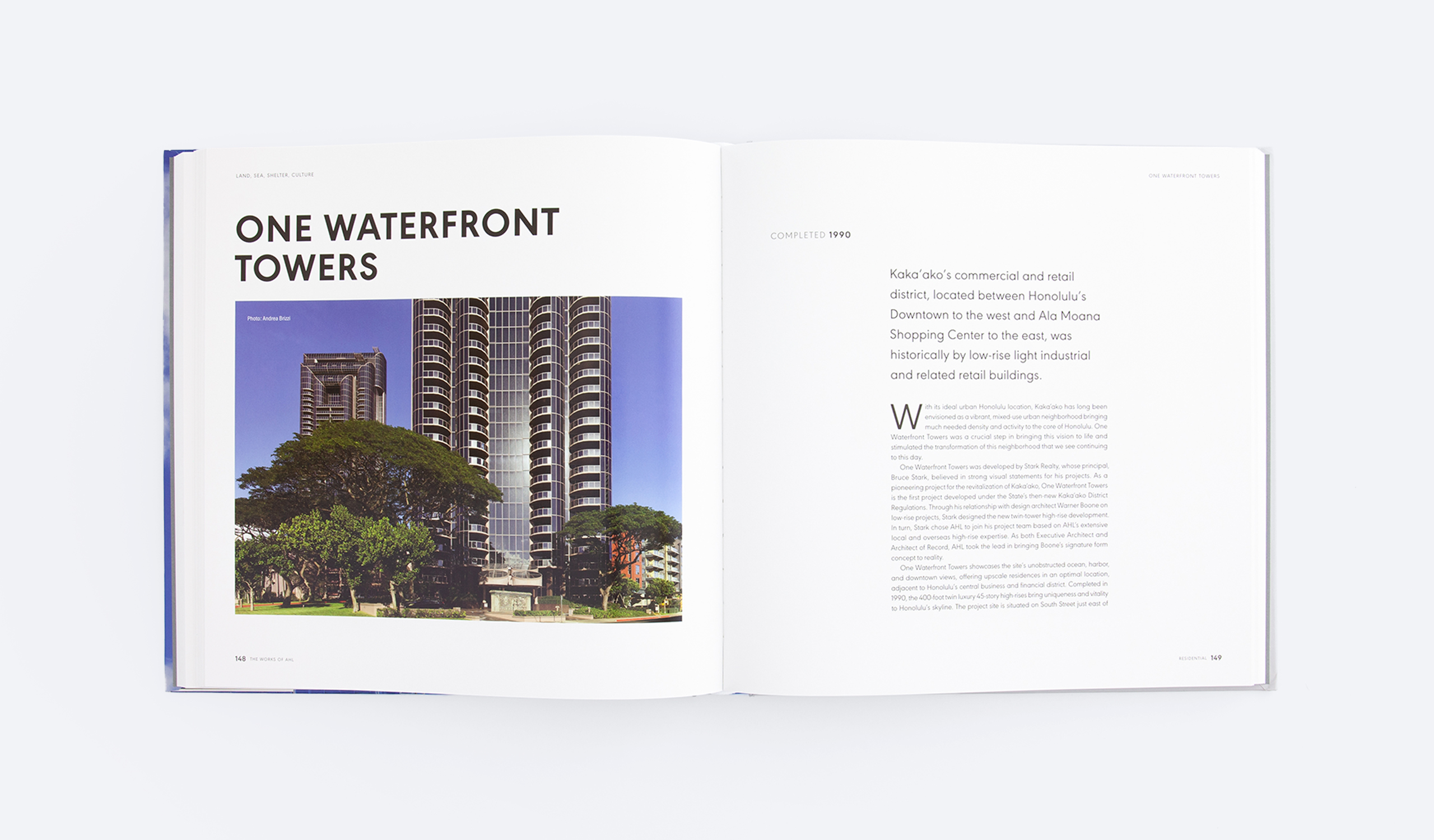 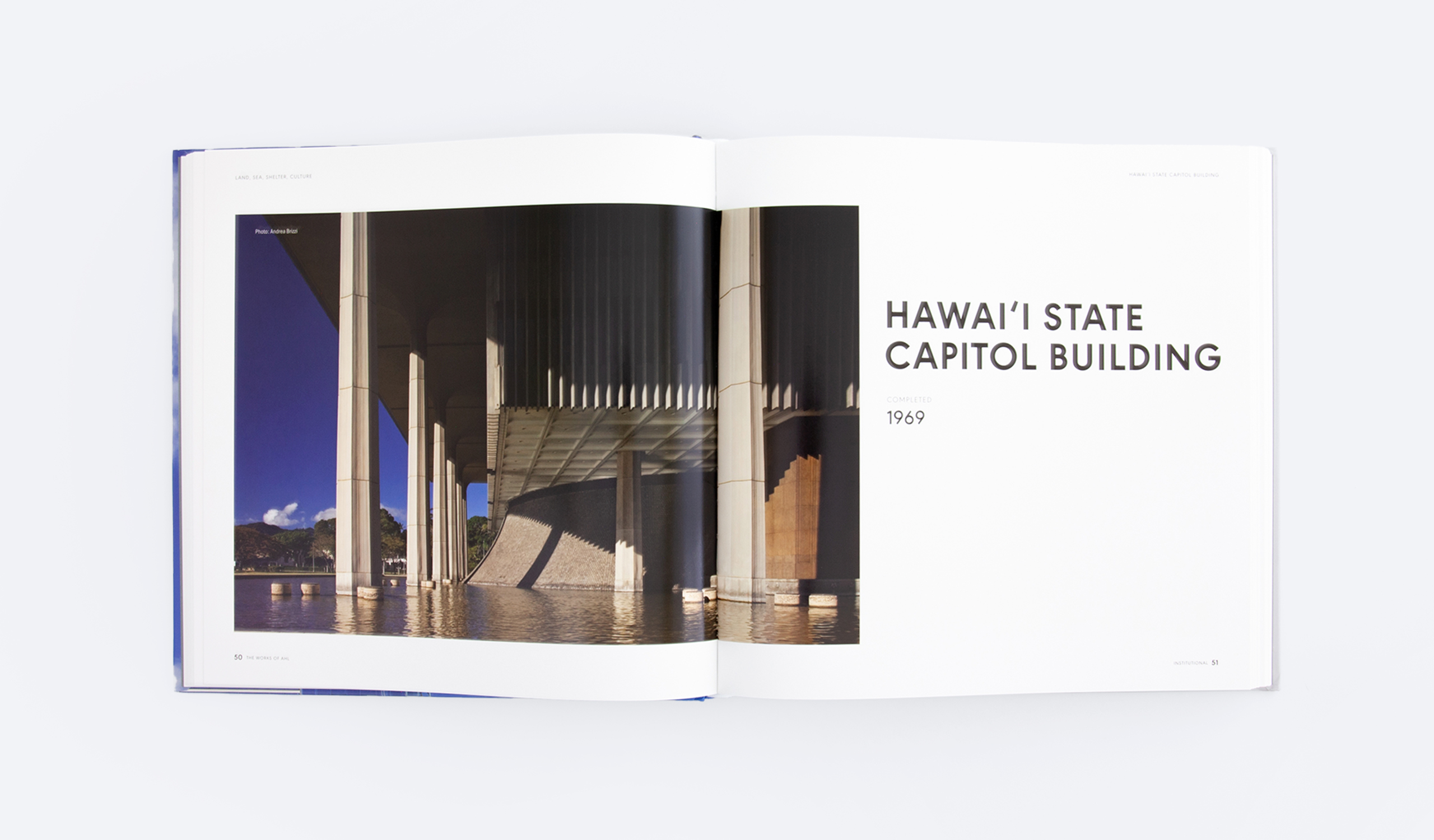 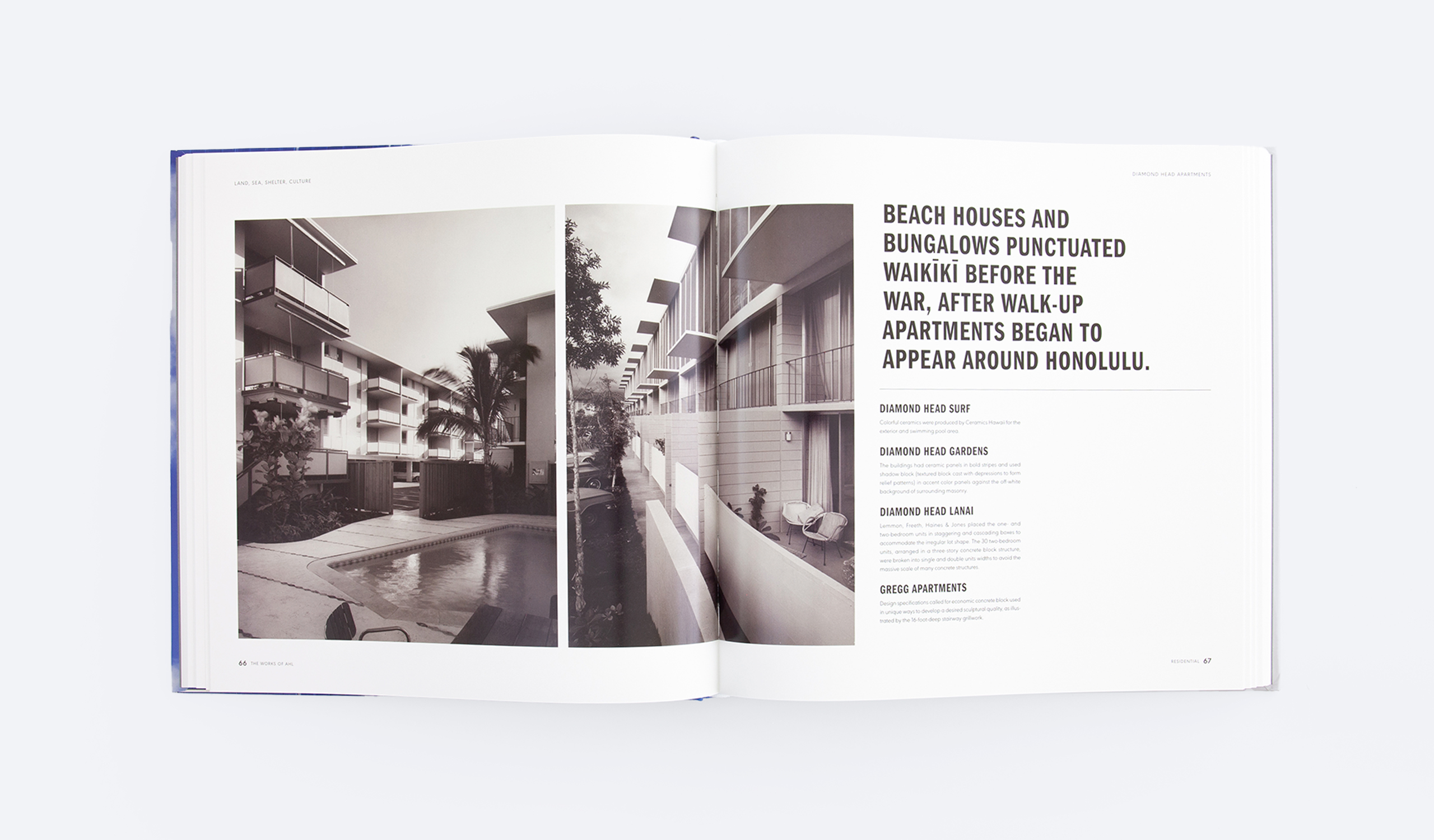 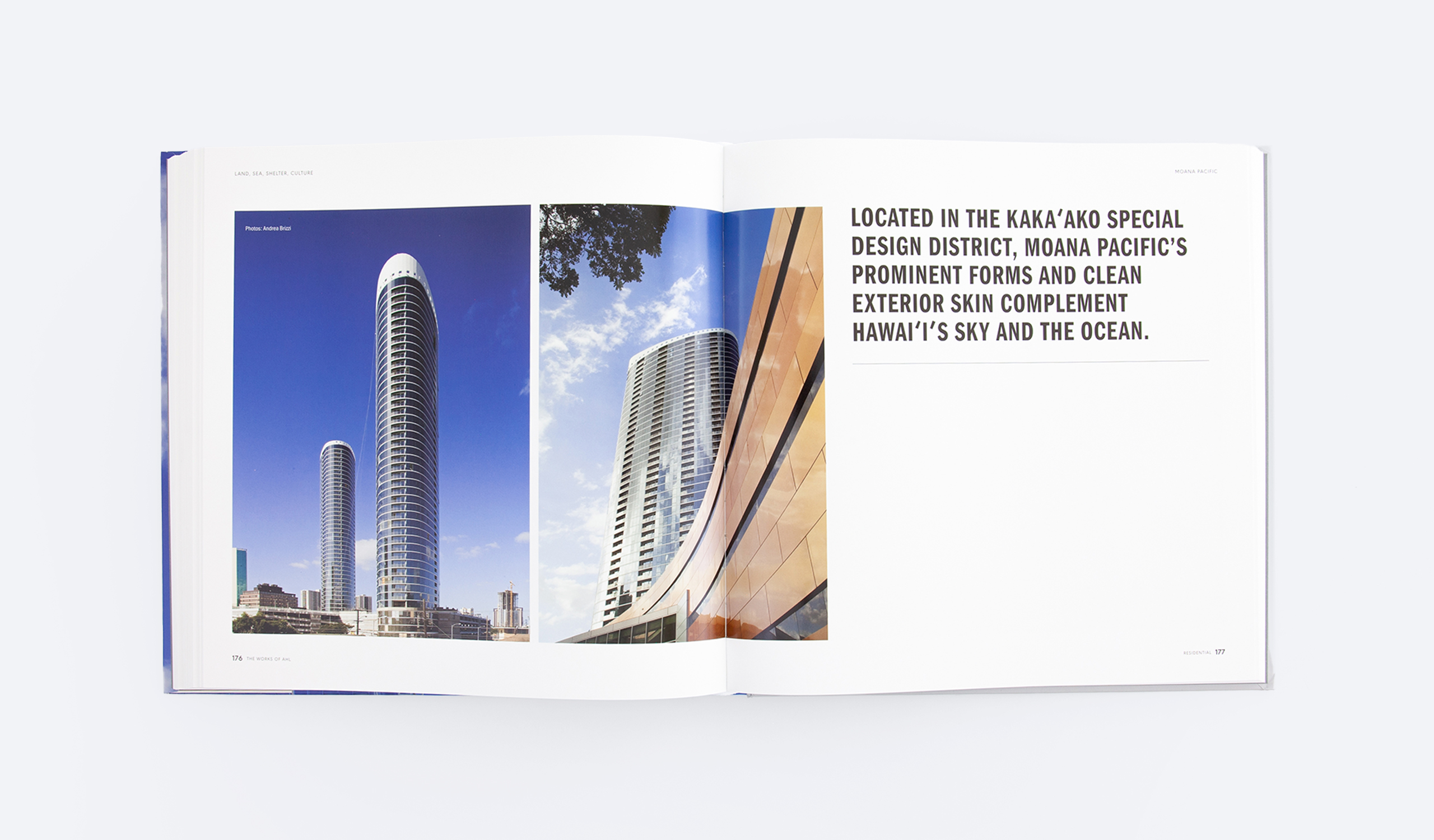 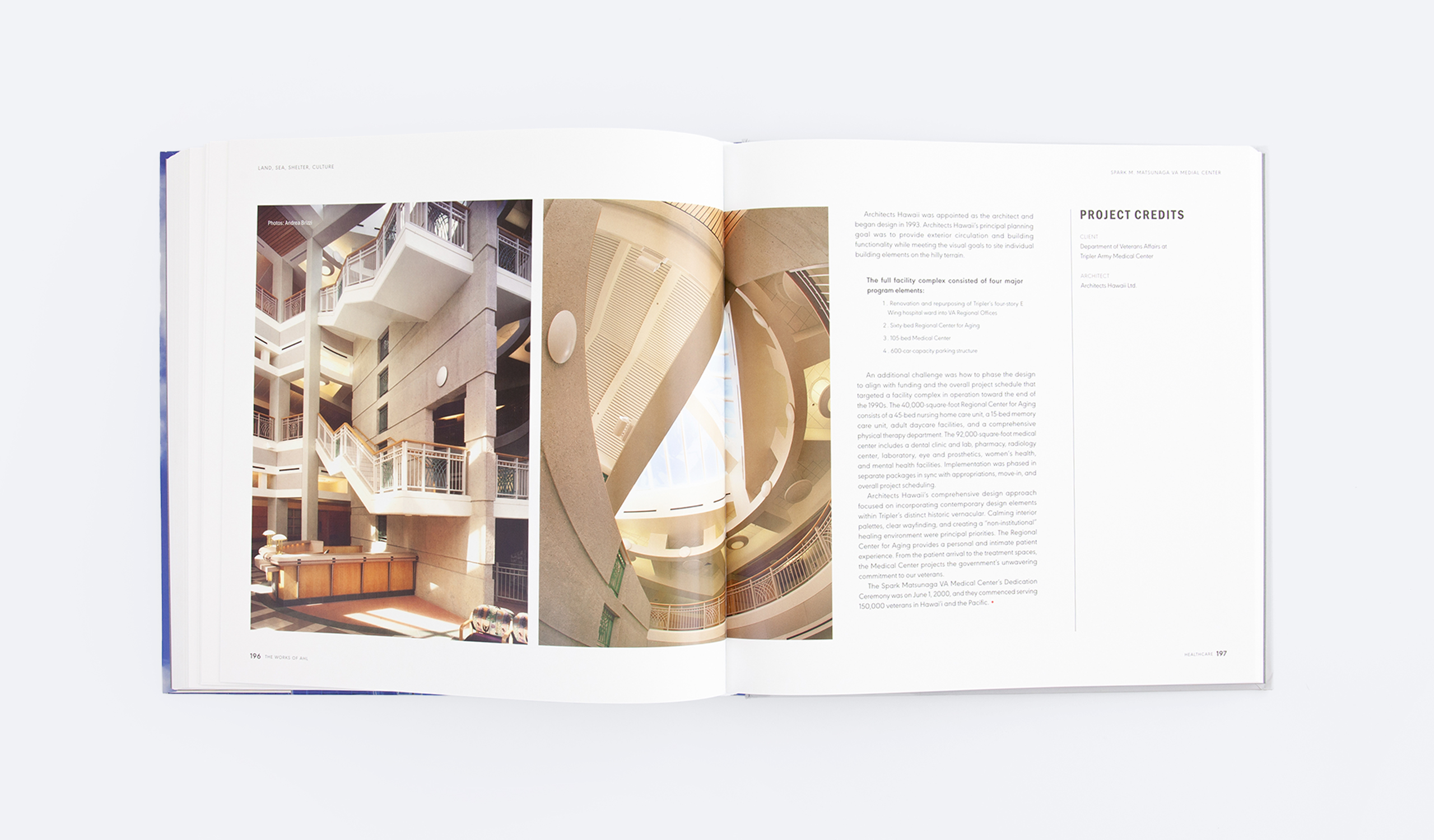 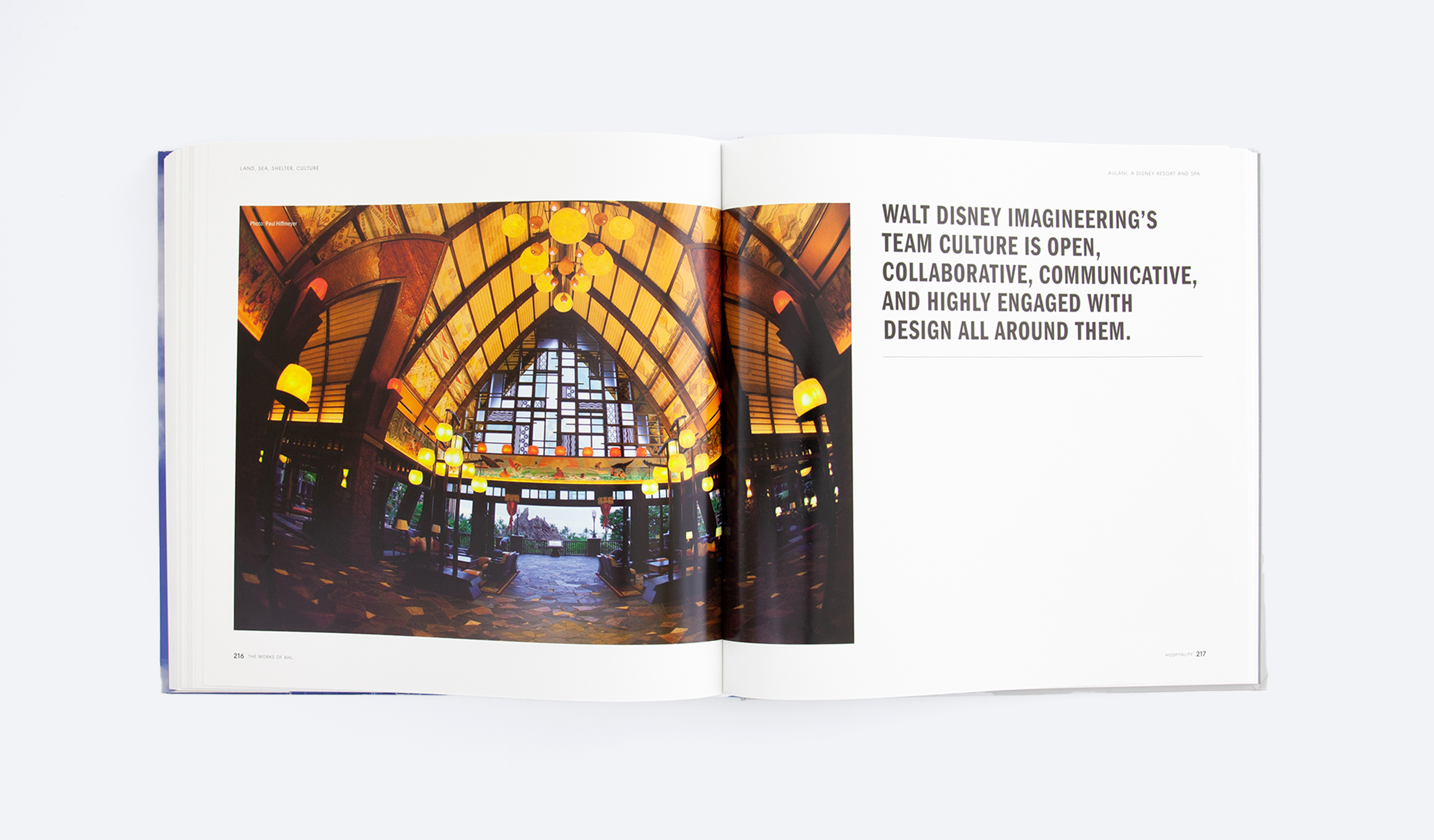