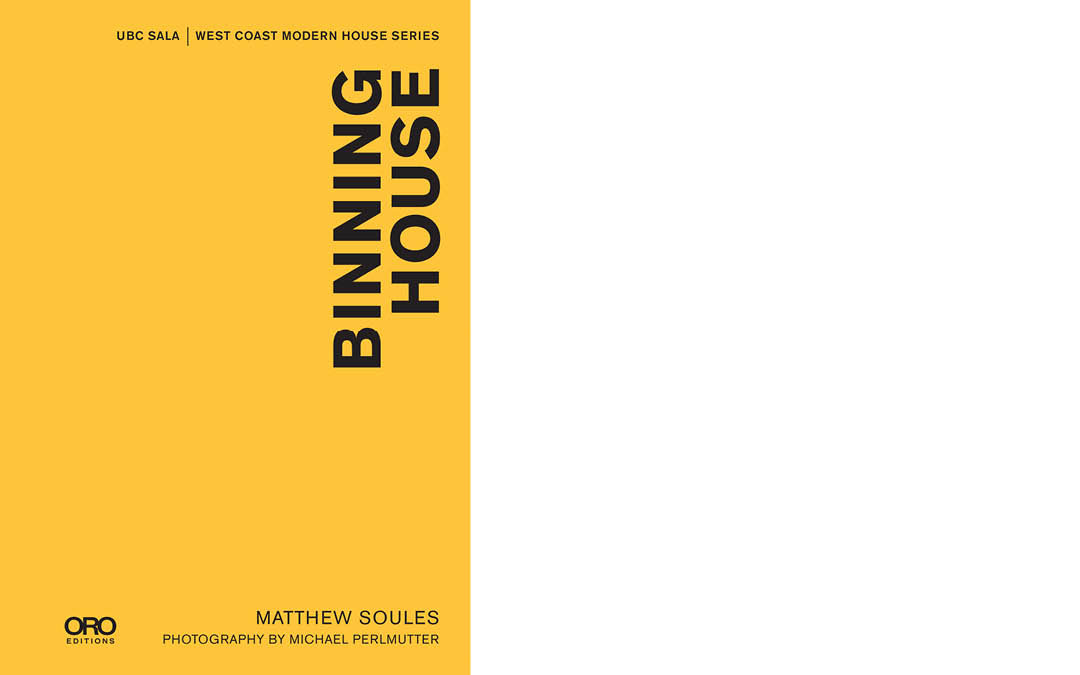 Spending time in the Binning House is like being enveloped in a gentle super-reality, not a parallel reality, but a simple amplification or re-positioning of specific characteristics that are always, already present. This Binning House reality pivots around the concept and experience of dynamism in its multiple guises. Are the walls at an angle or not? Did one move from the inside to the outside or the reverse? What is this mural? These experiential provocations generate a deep oscillation that has the effect of emphasizing how everything is always in motion. Somehow this has a tendency to render the rustling of the Japanese maple in the garden and the shimmering of the ocean as more intense, more real: a super-reality.

In this fourth book in the West Coast Modern House Series from UBC SALA, architect and author Matthew Soules takes a phenomenological tack in his narrative on the famed BC artistand his house. Again along with Leslie Van Duzer, Sherry McKay, Christopher Macdonald, book design by Pablo Mandel and photography by Michael Perlmutter, Binning House is a wonder as a revelation of both Binning the artist as well as the archetypal house he built in 1938. With a balance of erudite text and impeccable photography—along with the sumptuous colour palette selected for the book covers—the book is also complimented this time around by a series of meticulous section drawings done by recent UBC SALA graduate Lorinc Vass.

Having had the opportunity to live in the house for five years, Soules provides a unique perspective, having grown accustomed now to all its subtleties. This includes being confronted on a daily basis with the tilting walls in plan, such that no room is completely orthogonal—one wall always angled at 5 degrees to the others. It is an optical refinement akin to the entasis the ancient Greeks used in their temple architecture. And as a modern painter, Binning would’ve treated the six surfaces in each room as six canvases, allowing day-to-day life to play out on most of them. The great mural in the entry hall of the house is perhaps the cipher, the one wall he did treat as a canvas, allowing the others to angle away in their multitudes of perspectives.

Matthew also points out Binning’s decision to use semi-translucent glass in the interior walls of the house, separating the front hall from the living room and thereby creating a sense of transparency while simultaneously providing privacy throughout the modest 1500 square foot house. Furthermore, the glass doors opening into the backyard blur the sense of inside with the outside, another hallmark of West Coast houses. In 1938, these were all new idea to Vancouver architects and, visiting his house, Binning’s students would’ve been strongly influenced by these notions.

And if those walls could talk, there would be the tales of past architects and artists meeting within and without their confines to converse—gathered for their famous parties that collected the likes of Richard Neutra, who first arrived in Vancouver at the invitation of Binning in 1949. B.C. Binning is one of our region’s local treasures, as well as one of its best kept secrets—and for two decades, architecture students at UBC would’ve taken his drawing class, such that Binning influenced several generations of architects in the Lower Mainland.

With several pieces by him in the Vancouver Art Gallery’s permanent collection, his artwork also surrounds us in the built environment, such as the blue and green mosaic work of the then BC Electric Building (now Electra) next door to its neighbour the Del Grauer substation, also clothed in the same exquisite mosaic. Sadly, one sculpture is all that remains of the work he did for what was then the main branch of the Public Library downtown Vancouver, which at the very least provides us with a memory of his massive influence on our West Coast culture.

In Metro Vancouver, we can truly say that we are all still able to feel his influence around us, but not as personally as it must’ve been for Soules. At the book launch, he admitted feeling somewhat intimidated to have to convey his experience of living in this house. But he need not worry, as his is a respectful contribution to Binning’s legacy, a reminder that he was the progenitor of many of the tenets of modern architecture in our region, and his house is the physical manifestation of not just him, but that spirit of his time. The Binning House is zeitgeist.

And so in this latest edition of the SALA book series—and with only three more left—Binning House is among the best yet. From the insight into the life and times of Bert and Jessie, to Matthew’s appreciation of the first-hand experience of the house, the reader is given a rare glimpse of this architectural treasure. One can also appreciate through this book why there has been such a concerted effort to preserve the house, to ensure it does not fall victim to the ruthless Vancouver housing market (and goodbye Electric House). Such crusaders for the house as Adele Weder, Leslie Van Duzer, Sherry McKay and Chris Macdonald at SALA—along with Matthew, himself—should be acknowledged for the fine work they’ve done to preserve the home, as it is now named a National Historic Site of Canada.

Likewise, this book is now a part of the story to preserve this and other important West Coast modern houses, with many more stories still needing to be told, much like the Binning House here.

Sean Ruthen is a Metro Vancouver-based architect and writer.