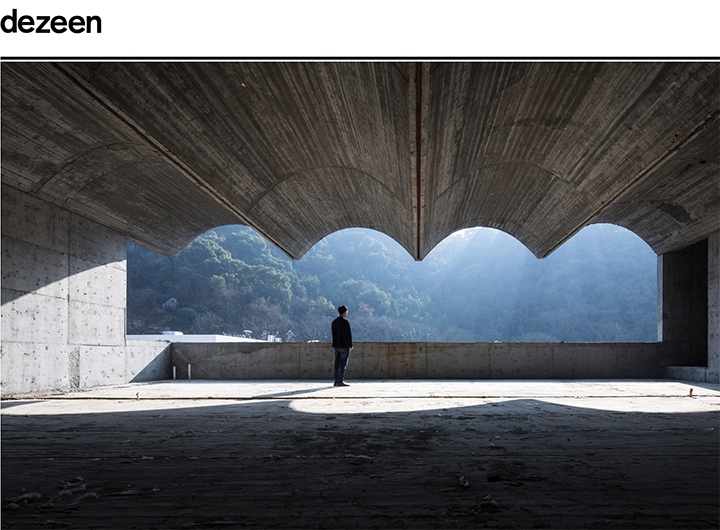 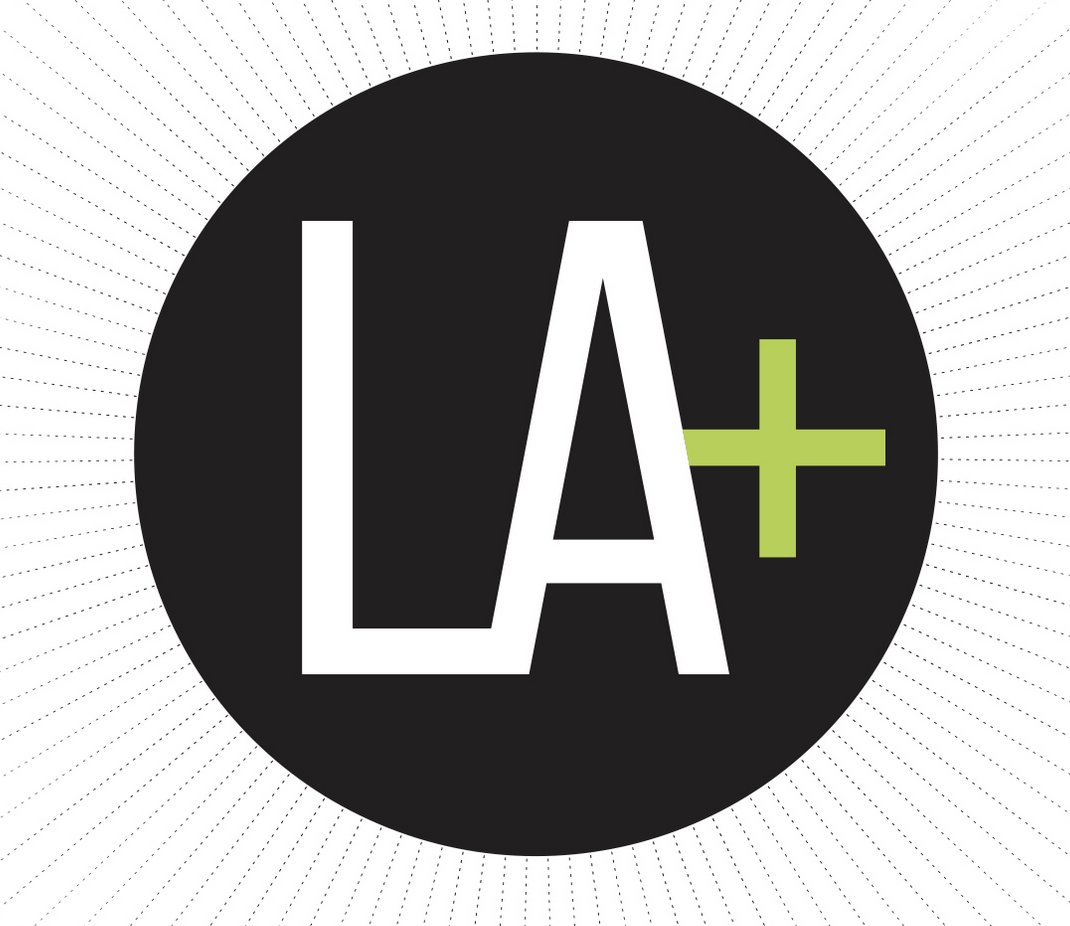 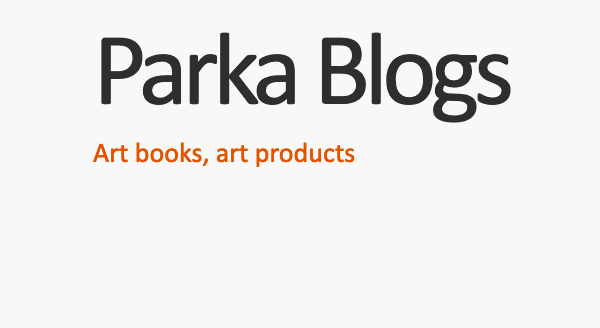 Draw It Featured on Parka Blogs

Increments of Neighborhood is featured on Architecture Lab

Our Voices: Indigeneity and Architecture

It is becoming increasingly clear that Indigenous knowledge systems will be vital in managing our planet’s complex future challenges, such as climate change and population growth. This publication brings Indigenous voices from across the world to the fore and, although they are diverse and varied, it is clear that these voices are critical to flourishing built environments. It is urgent and necessary to hear them.

Our Voices: Indigeneity and Architecture begins as its title signals, calling to its reader in chapter-long verses that share research findings, practice observations, lived experiences and creative modes at the confluence of Indigeneity and architecture. Published by ORO Editions in 2018 and co-edited by Rebecca Kiddle (Ngāti Porou and Ngā Puhi), luugigyoo patrick stewart (Killerwhale House of Daaxan of the Nisga’a Village of Gingolx) and Kevin O’Brien (Kaurareg and Meriam peoples of the Torres Strait Islands), Our Voices is an extensive survey comprising twenty-five chapters contributed by Indigenous thinkers working as academics, activists, architects, artists, conservationists, designers, educators, policy analysts, urban planners and researchers invested in Indigenous architectures.

The book opens with a tribute to Māori architect Rewi Thompson(Ngāti Porou, Ngāti Raukawa), authored by Deidre Brown (Ngā Puhi, Ngāti Kahu), Nicholas Dalton (Te Arawa) and Te Aritaua Prendergast (Te Whanau a Apanui, Ngāi Tahu and Ngāti Porou). In doing so,it sets a protocol of privileging Indigenous people and their lived experiences of ancestry, cosmologies, intergenerational knowledge and relationships to land, sky and water. The subsequent chapters layer the authors’ voices with a sensibility of global Indigenous practices of oratory and song. Each chapter begins with the author’s biography, and as a collection, these biographies span the architectural, the lyrical and the scholarly. In this way, the book threads an intangible and relational context through the text, placing the reader in the time/space of Indigeneity. Its focus spans the globe, with research taking place across Aotearoa New Zealand, Australia, Turtle Island (USA and Canada) and Taiwan’s Indigenous communities. Each author describes the challenges facing not only Indigenous people but also themselves as minorities and therefore often marginalized professionals in their specialist fields. While these experiences are diverse and varied, there remains a consistent thread: that Indigenous voices are critical to flourishing Indigenous built environments and that it is urgent and necessary to hear them.

Haare Mahanga Te Wehinga Williams (Te Aitanga-a-Mahaki, Rongowhakaata, Tuhoe) recounts a childhood raised in a traditional Māori environment where domestic life was woven into the greater universe through horticulture, fishing and the preservation of foodstuffs. Williams introduces his whakapapa (genealogy), describing through prose the transfer of intergenerational knowledge in the planting, harvesting and cooking of kumara (sweet potato). Through Williams’s descriptions of ceremony and the Māori calendar and way of caring for the world, the reader is introduced to knowledge systems that maintain balance in the world. Later, Amiria Perez (Ngāti Porou and Ngā Puhi) also draws on biographical reflection to make insightful commentary on how Indigenous women have contributed to the construction of meaning in space. Using text-based creative practices, luugigyoo patrick stewart describes his architectural journey spanning academia and practice through a writing style that layers stewart’s biography and nisga’a language with architecture and Indigeneity. As the reader encounters each word in nisga’a, a phonetic spelling guides them through correct pronunciation – an invitation to announce the words out loud – encouraging the reader to bring their own voice to the community within the book. Kevin O’Brien discusses the intersection of architecture and consent, based on observations made and experiences gained through his architectural practice. O’Brien proposes that, in the many ways that architecture may be envisioned, there is yet much work to do in the architectural and academic industries in acknowledging Aboriginal people and Country. Reflecting on the urban centres of Australia as records of settler colonialism and the consequent impacts on Country, O’Brien proposes that it will be Country that reveals new knowledges in architecture, fit to undertake the unknowns of the future such as climate change and population growth. O’Brien’s position is that architecture must find more meaningful pathways to engage with Aboriginal people instead of creating an “Aboriginal architecture industry,” a cynical category for exploitation by academics and practitioners, Aboriginal and non-Aboriginal alike. O’Brien’s argument is that the only genuine Aboriginal architecture industry is one in which project architects, from beginning to end, are Aboriginal.

Rebecca Kiddle compares placemaking and the ideologies that underpin Pre-colonial whānau and hapu¯ placemaking, which centered on familial units of whānau (extended family) and hapu¯ (sub-tribe), with its counter, colonial placemaking, which is premised on the conversion of communally owned land to individual title. Kiddle revisits these conceptual differences to contextualize present-day realities of contemporary placemaking practices, which bear such legacies. Where current planning does not support the realization of Māori identities in placemaking, the successful embedding of Mātauranga Ma¯ori in urban planning remains possible, but Kiddle advises it requires Māori stakeholders.

The fracturing of Indigenous architectures and spaces under the externalized pressures of capitalism is explored in a study of the homes of Métis people by David Fortin (Métis Nation of Ontario), Jason Surkan (Métis) and Danielle Kastelein (Métis Nation of Ontario). Their close readings of the private and public realms of Métis domestic spaces reveal how the compartmentalized rooms of state-sanctioned housing curtail traditional practices typically socio- spatialized in the open plan of Métis folk homes. This is one among many case studies in the book that find that, in order for housing for Indigenous people to truly support their wellbeing, it must be designed to fulfil their value systems and social institutions.

In his chapter on the inner-Sydney suburb of Redfern as an Aboriginal place, Michael Hromek (Budawang tribe of the Yuin nation) observes the unique spatial qualities of The Block, a Redfern site developed for housing in the 1970s by a community-controlled service called the Aboriginal Housing Company. One of the successes of The Block was its shared public spaces, created through the removal of backyard fences between houses to strengthen a sense of community. Hromek considers how The Block may teach useful lessons on spatial thinking for urban Indigenous communities, even as history and politics render The Block today as a painfully contentious legacy for local Aboriginal stakeholders.

Timmah Ball (Ballardong Noongar) observes how social mobility has impacted the Indigenous experience by creating new identity intersections for contemporary First Nation Australians. For Indigenous creative practitioners, such interfaces present ethical questions in their professional worlds as mainstream institutions demonstrate an appetite for their cultural input. Industry bodies that draw on Indigenous peoples’ cultures for design inspiration without also investing in their holistic wellbeing should be regarded with caution by Indigenous practitioners, Bell asserts. Indeed, one hopes these may be concerns for all.

Throughout the book, philosophical entanglements, creative research and practice encounters are untangled across specialist fields and disciplines. Ellen Andersen (Ngāti Raukawa ki te Tonga, Ngāti Kapumanawawhiti) describes the legislative contours behind the genesis of the Māori Built Heritage Programmeat Heritage New Zealand Pouhere Taonga, which has worked with more than 400 marae communities across New Zealand. Her essay explores how Indigenous-led heritage practices have better served the conservation and preservation of Māori architectural heritage. Daniel Glenn (Apsáalooke [Crow] Nation) speaks to the rewards of weaving Indigenous approaches into the design methodologies of an architectural practice, and how the ceremonial and social traditions that surround his practice make meaning beyond cultural responsiveness: his architecture acts as service that sits within a genealogical context that connects contemporary practice to ancestors. Jade Kake (Ngāpuhi [NgātiHau me Te Parawhau], Te Whakatōhea, Te Arawa) discusses how cultural orders arrange buildings, proposing that to reconcile a Māori way of doing things with an architecture practice, one must have a community-based approach. Michael Laverdure (Makwa Doodem, Anishinabe and Turtle Mountain Band of Chippewa) reflects, too, that Indigenous architecture is about its people in a place; it cannot belong to any one person because its ownership lives with its community.

All of the book’s contributors lend their voice to this unifying strand that binds the chapters together. Throughout, conflicts between western ideologies and Indigenous worldviews present practitioners with epistemological dilemmas, often negotiated at invisible costs to themselves. As they relate the multifarious twisting and turnings of Indigeneity in the built environment, their voices weave a clear argument: that Indigenous practitioners and researchers remain the most invested stakeholders in the continuum of their built realms and are therefore essential voices in defining them.

Karamia Müller is a Pacific scholar and feminist specializing in Pacific space concepts. She is currently a lecturer at the School of Architecture and Planning, Creative Arts and Industries, University of Auckland. 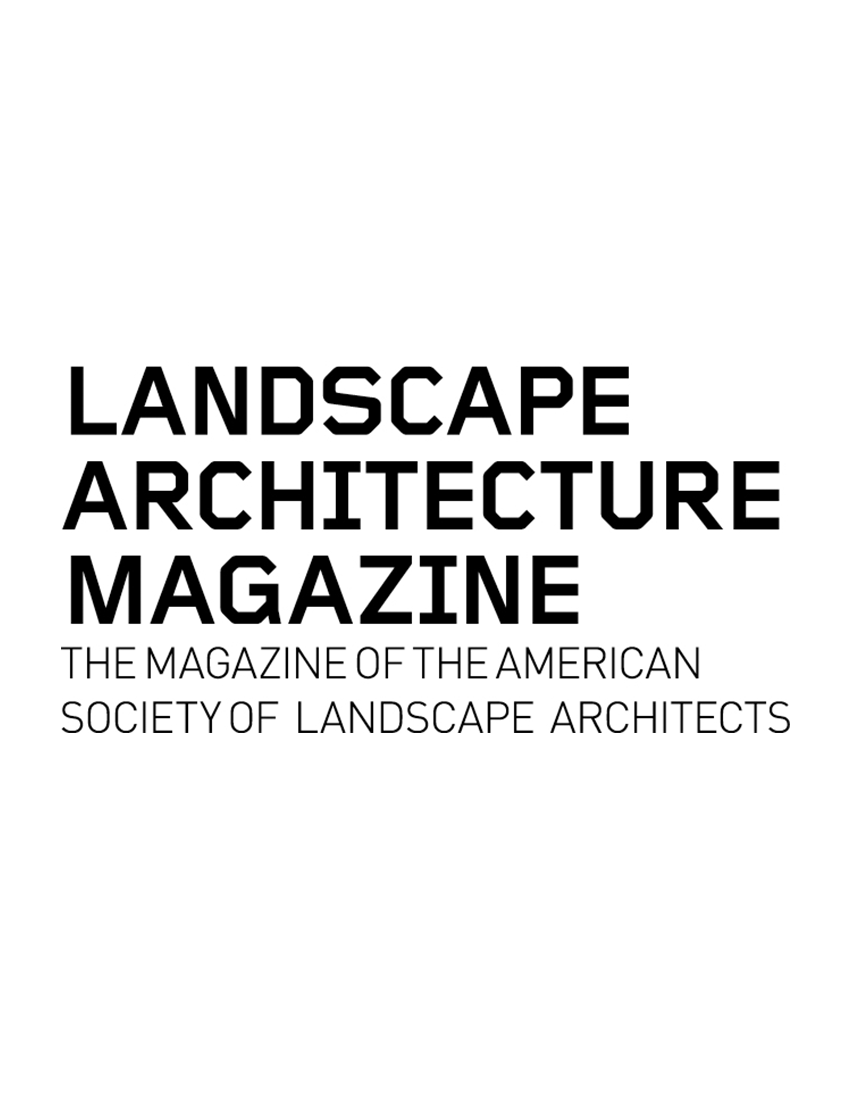 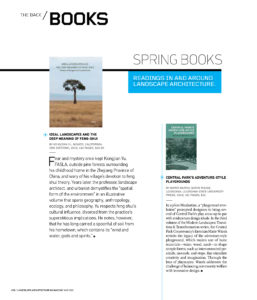 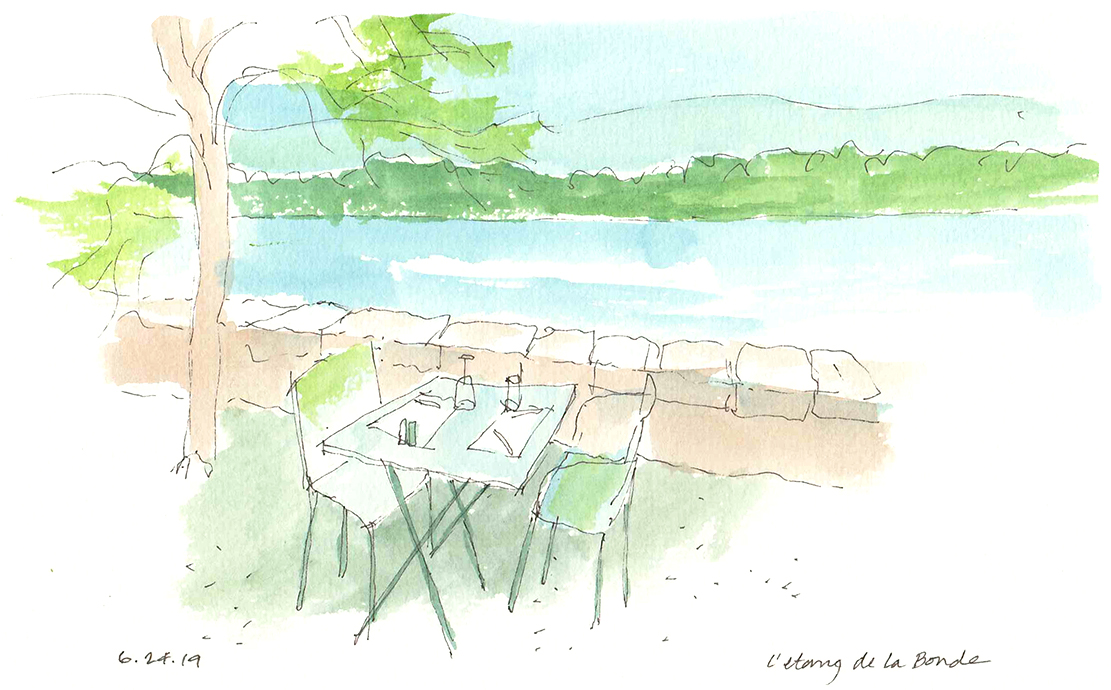 We sat on an elevated terrace among strangers beside the lake, breathing in the languid air at dusk.

We were dining at l’Etang de la Bonde Pizzeria Snack Bar. My friend said it was his favorite place to eat: good food, no waiter hovering about, no decor, just people and trees. In a nation with 350 cheeses and three-star chefs, here was a dining place for everyone, an escape from work, a cheap plate of food, a glass of red wine, and conversation under the trees.

The smell was of hand-rolled cigarette smoke and rosemary. Squeals of laughter came from children playing in the lake. Shy dogs begged politely for scraps. Occasionally, a mournful cry from the kitchen announced that an order was ready, then someone would claim a pizza the size of a table cloth or a steak and frites.

A lot of the people dining here looked as if they worked hard. The parking lot was full of white vans and older model cars. There was laughter but no drunkenness.

At nightfall, a family of ducks eased into the water with hardly a ripple. Moms wrapped their children in towels. And we all left for home. 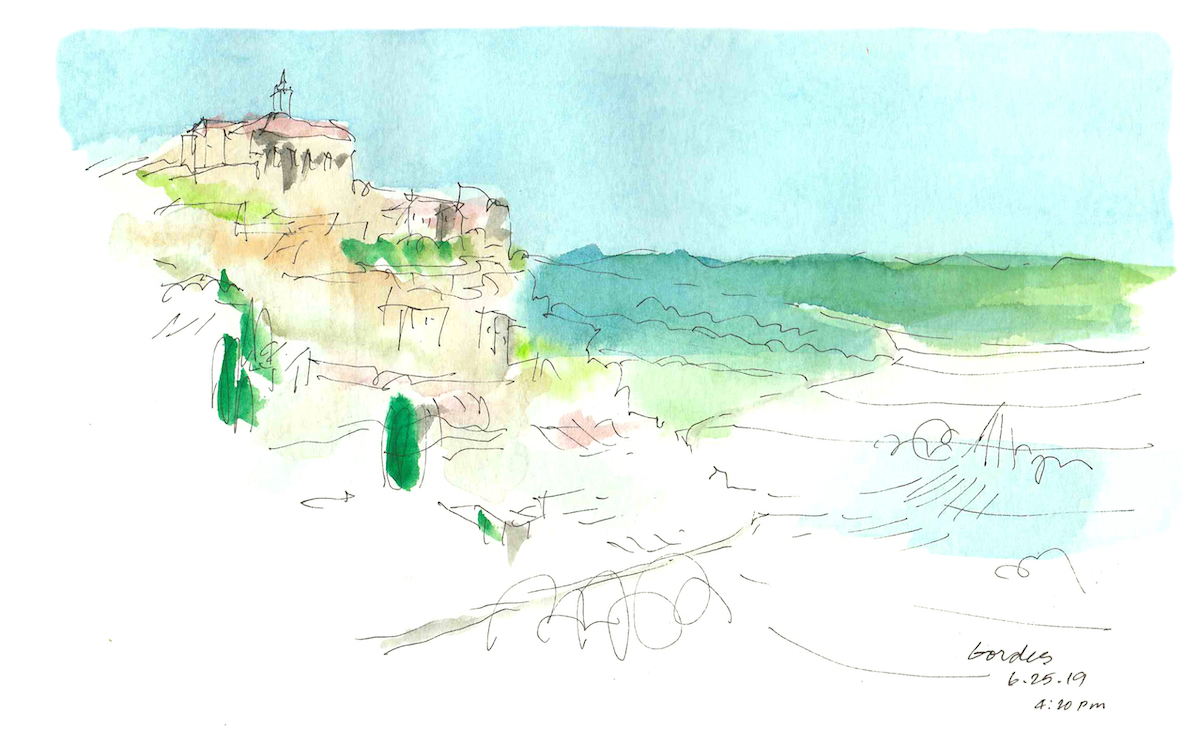 The autoroutes in France may knit Normandy to Provence, but you can drive across the entire nation without, it seems, noticing a single thing. "Life doesn’t happen along the Interstate,” William Least Heat-Moon wrote,” it’s against the law.”

But recently I tapped the brakes near the village of Gordes in Provence and drove the winding uphill road to the stone village founded in 1031 and perched like an eyrie above the autoroute.

Tourists blocked the road just outside Gordes, taking selfies on their iPhones with the village as a backdrop. Then in a village café, I discovered that I could order a “Real Manhattan Hot Dog.”

Few things can be as elemental as a place like Gordes, a village built of the stone it stood on, huddled for defense in a hostile place, yet with a town square where a seamstress and a farmer could share a pastis.

Today, by contrast, we live in a whirl of possibility, enabled by the autoroute and the internet, where everywhere is available but nothing is really significant.

If the autoroute and Instagram belong to everyone, I thought, Gordes belongs to where it is.

With or without Le Hot Dog.