We all know a good restaurant has the ability to pull us in with more than just its food. Thoughtful design, a welcoming ambience, and individual stories that personalize the experience for the diner can all transcend what a single menu is able to deliver. In Glen Coben's new book, An Architect’s Cookbook: A Culinary Journey Through Design, the principal of New York-based Glen & Co. shares a unique glimpse of his exciting restaurant projects—as well as the most memorable recipes that accompanied each one. Here, an excerpt.

I love to eat, I love design and architecture, and I love working with chefs who are passionate about their craft. I think my appeal to this type of project is how parallel the two professions are to one another—they are both service-based, but the creation of an immersive “guest experience” is what makes chefs and architects soul mates, only separated by how much quicker the destruction of a meal is over a building. But seriously, imagine building a dish or a meal each night to see it consumed and become only a memory. I guess each day provides an opportunity to once again create and strive for perfection. I love to cook to see the sheer delight in someone’s face when the flavors come together, but it doesn’t beat the joy I get when seeing someone light up as they walk into a space that I have designed.

So what better way to honor this complicated relationship than to write a book that is part travel journal, part design glossary, and part cookbook.

Chef Gabriel and I met for the first time at a Le Pain Quotidien across Bryant Park from his future restaurant space. Due to his quiet and unassuming persona, I was instantly drawn to Gabriel—he smiled easily and was humble. His experiences paralleled mine in a way, while I "studied" under David Rockwell for a few years, he worked under Jean-Georges Vongerichten and other top tier chefs. Waiting until much later than the young chefs of today to open his own eponymous restaurant, I too waited to open my own firm. These parallels between our lives allowed me to understand the stakes that Gabriel was risking. I wanted to take this journey with him and see him succeed on his own. 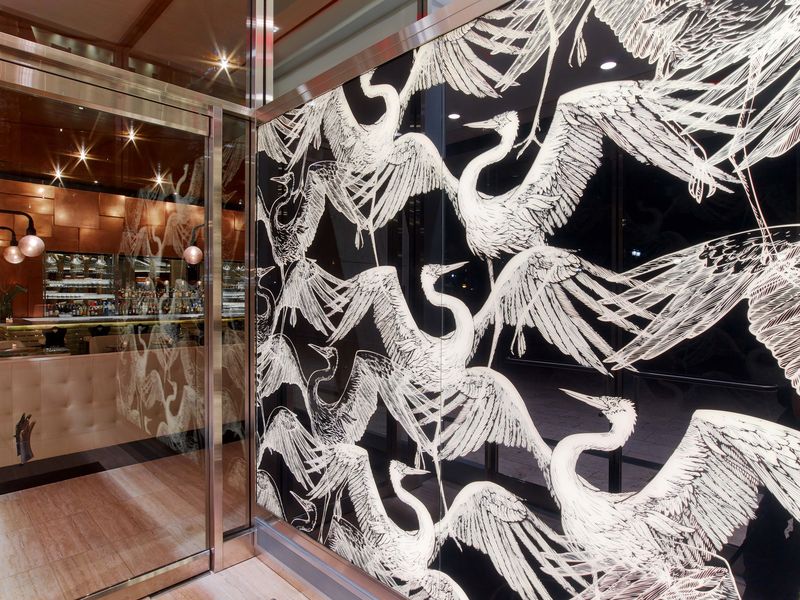 Alsace, Chef Gabriel's birthplace, is famous for its ubiquitous white storks. These beautiful birds are seen depicted in the entry mural as well as in small details throughout the restaurant. 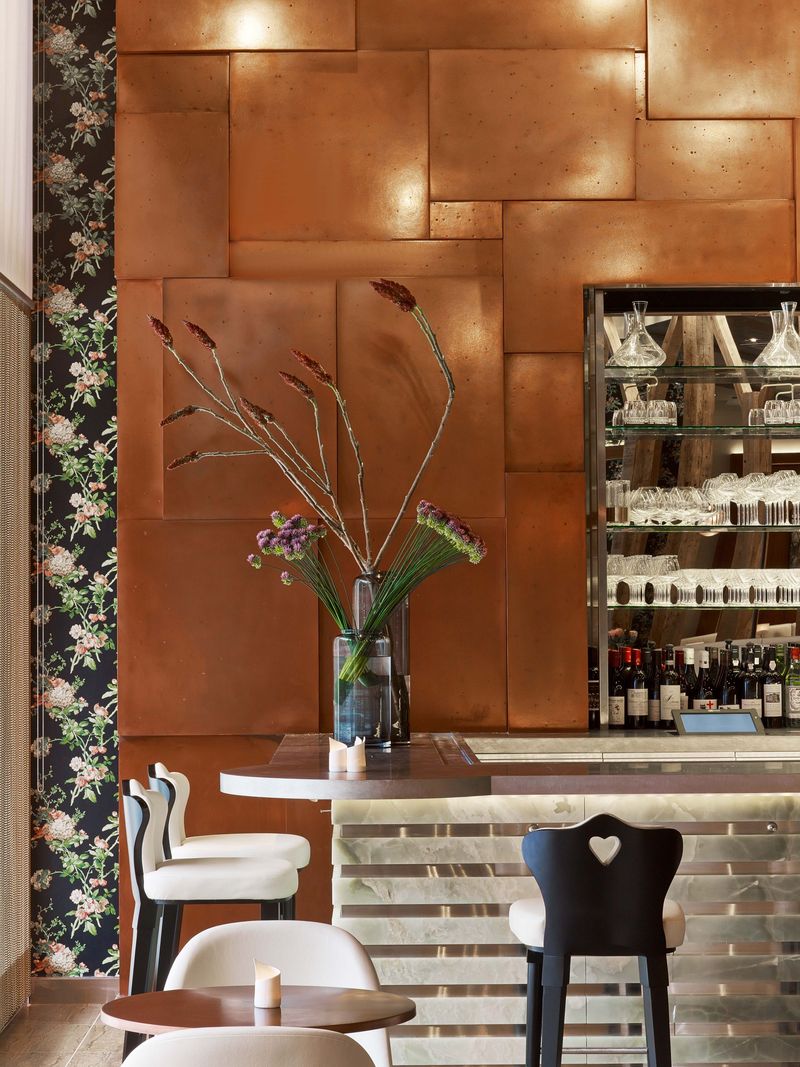 The custom-designed bar stools are a unique symbol for Chef Gabriel: They represent his personal welcome to each guest. 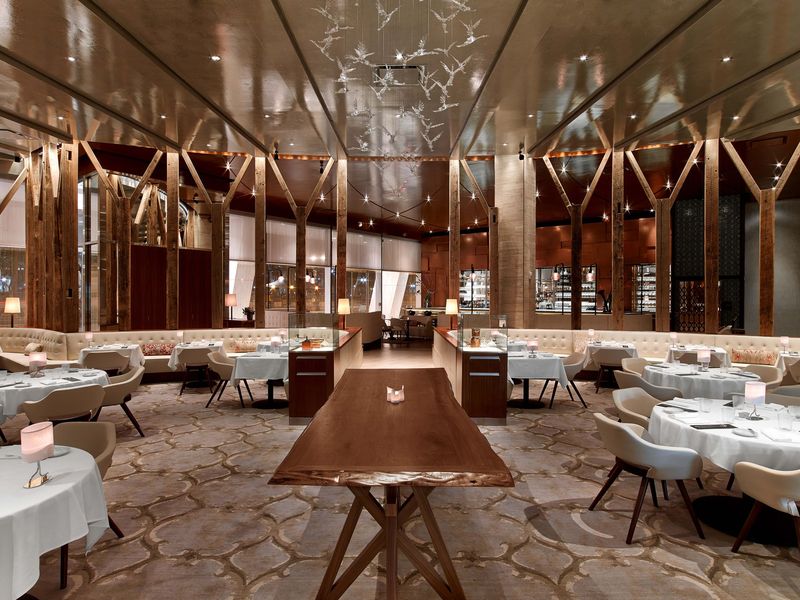 Beautiful reclaimed wood columns from Vermont modernize the space, but maintain a natural warmth to complement Chef Gabriel's food and Alsatian past.

How many times do we get to design a third, unique restaurant for one of the most creative, talented, and thought-provoking young chefs in America? When Alex Stupak and his partners asked us to work on their fourth freestanding restaurant that was to be located on West 53rd Street in Manhattan, I said "absolutely." I was very familiar with the location, as I had toured it with several restaurant clients who had ultimately passed on the space. They had passed not because of the location (it's a fabulous Midtown location), not because of the landlord (Boston Properties is a fantastic landlord), but because of the super challenging space. 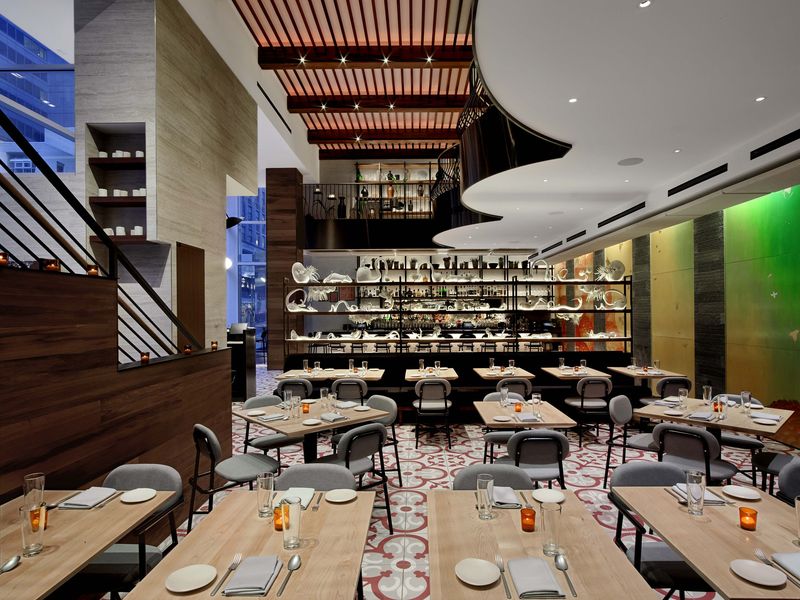 I can honestly say this project was the single most difficult project to design and build. It is three stories, but there is literally seven feet of space that consistently overlaps between the three floors. The architecture of the balcony overcame logistical problems to blossom into a true showroom for Chef Alex's vision. 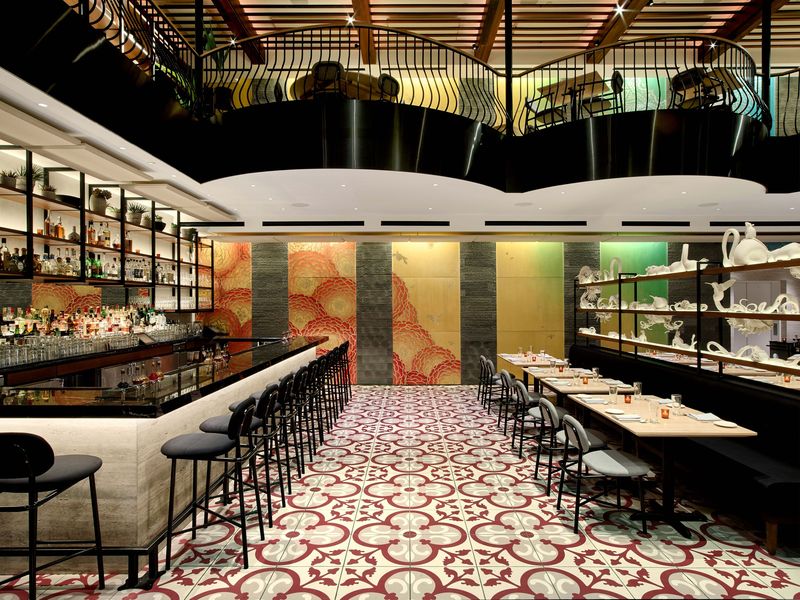 Sylvia Ji has always provided a framed portrait for each restaurant, but here, Chef Alex Stupak and I wanted to give her the entire back wall of the restaurant's main space—a 20-foot tall room sliced in half by a balcony. Seen from the street, this painting sets the mood. We gave Sylvia large vertical recesses to install her work—the recessed defined by volcanic stone cut into modern stone blocks. The volcanic stone is our way of nodding to Mexican cuisine, channeling the same material the mocajente bowls used for making guacamole are created from. 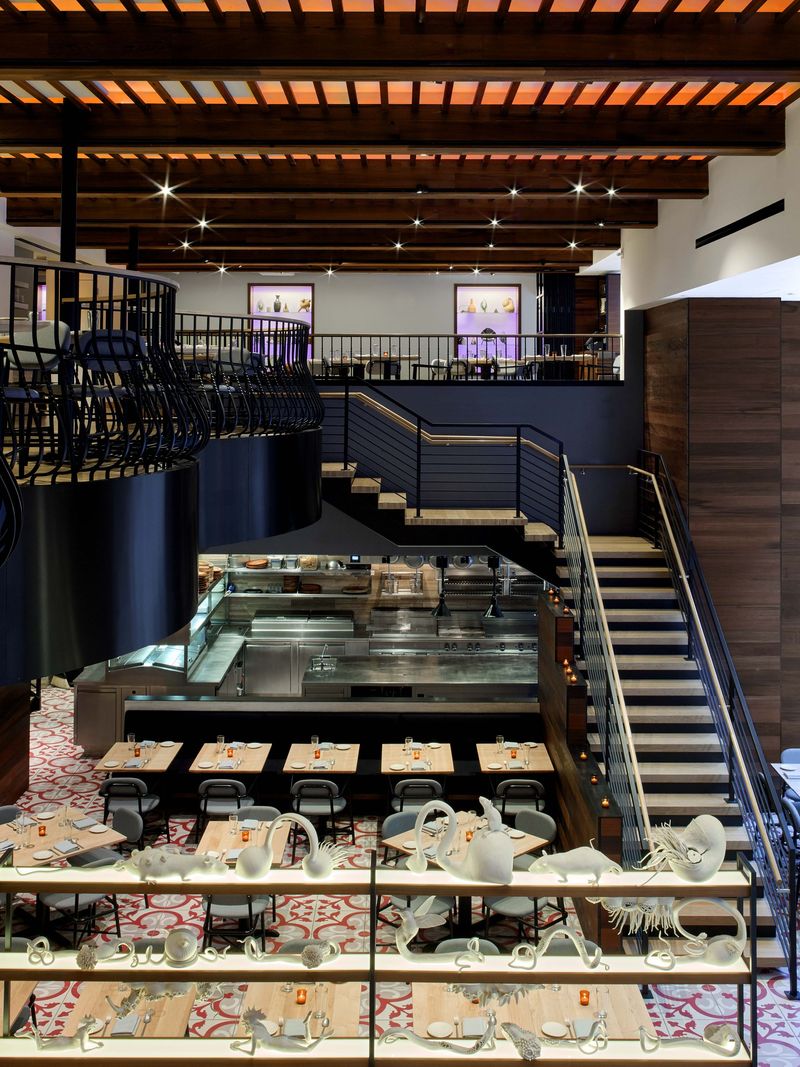 We were hired in 2016 by a new ownership group, who had purchased the historic Ames Hotel in downtown Boston, to redesign the public spaces of the hotel. We were asked to include a redesign of the restaurant space on the ground floor of the hotel. The design for the hotel channeled the rich history of the Ames Company and used American manufacturing as the backbone for the story and materials used. 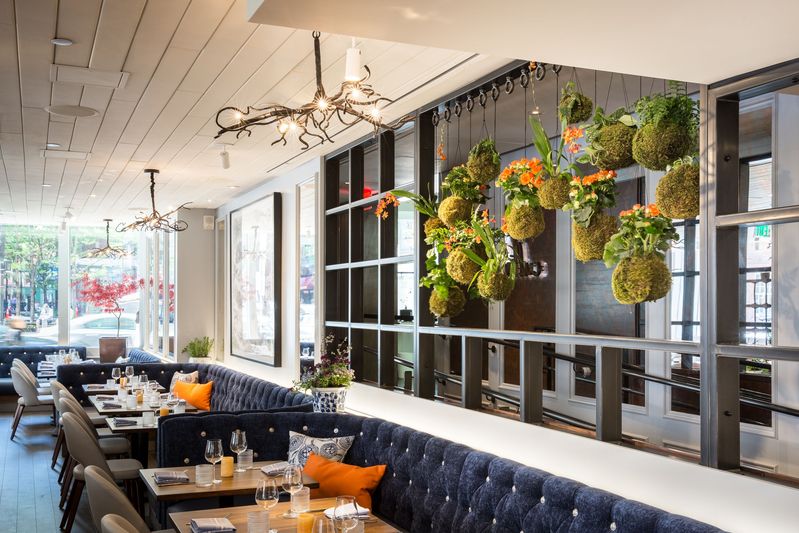 Cultivar was borne from Chef Mary Dumont's narrative. Her family's revolutionary war muskets gave way to the idea to use brass buttons from revolutionary coats as buttons for the diamond tufting on the navy blue banquettes. 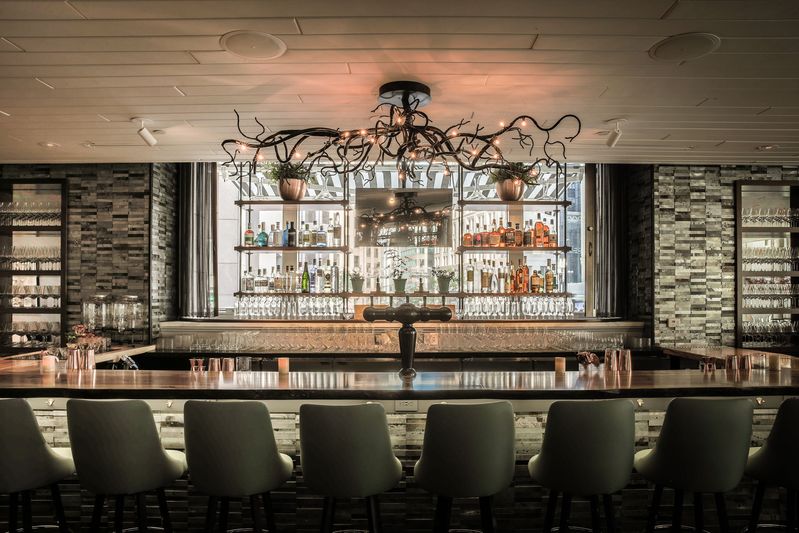 We also found a beautiful slab of beech tree and used its live edge for the bar top, bringing in the warmth of nature. 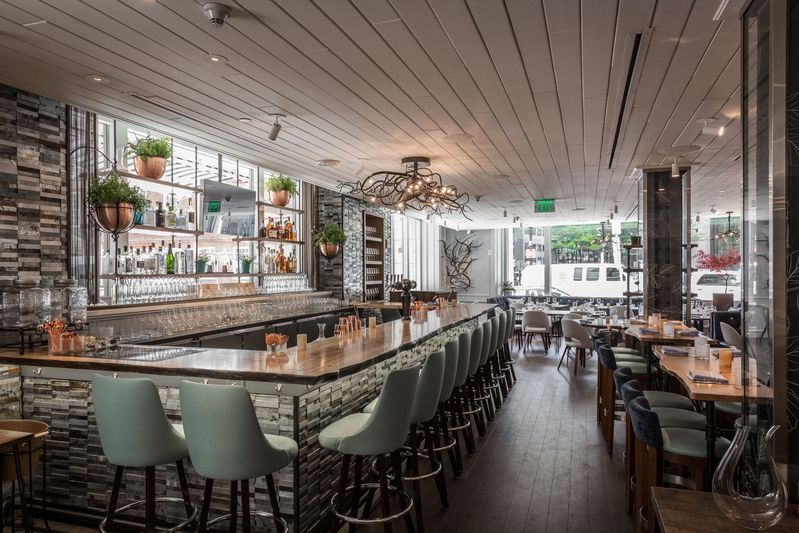 The name Cultivar comes from Chef Mary, who creates an assemblage of things selected for their desirable characteristics and maintains them for growth and propagation.

This excerpt has been edited and condensed for clarity.