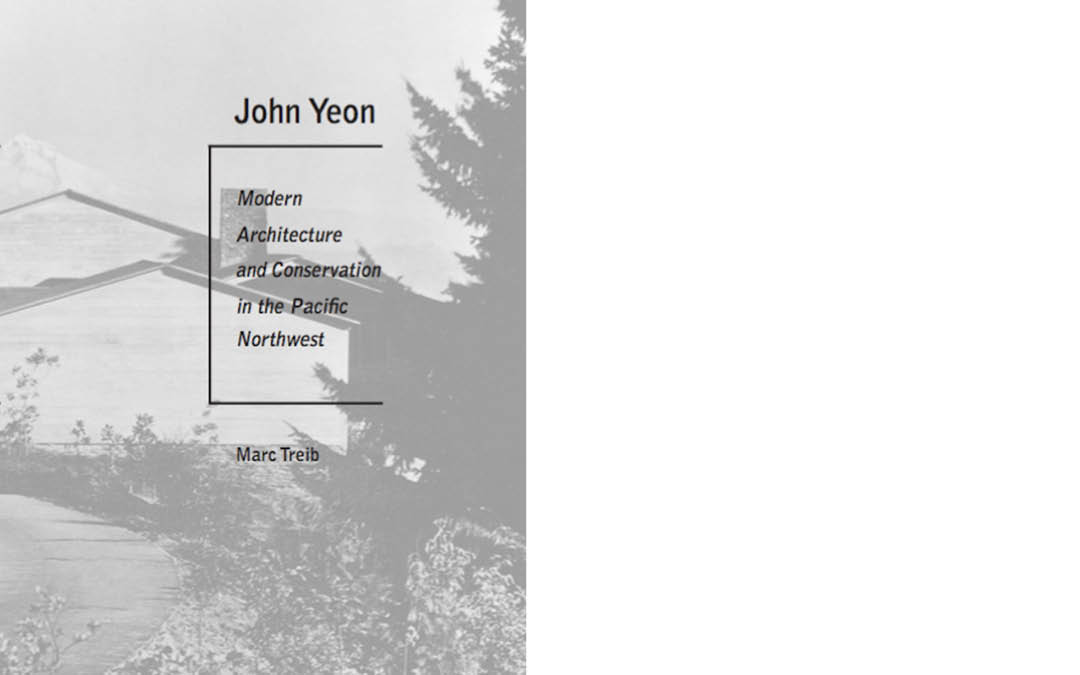 John Yeon: Modern Architecture and Conservation in the Pacific Northwest

John Yeon: Modern Architecture and Conservation in the Pacific Northwest
Those not hailing from the Pacific Northwest may be less familiar with John Yeon, one of the influential figures in architecture and conservation and the development of a unique brand of regional modernism.  If you don’t know Yeon, or you want to learn more, you will be pleasantly satisfied with the recent volume from Oro Editions by Marc Treib, “John Yeon: Modern Architecture and Conservation in the Pacific Northwest”  The life and arc of Yeon’s career is carefully documented with many images and illustrations spanning his diverse and influential career.  And while I knew of and about much of his work, the detail unlocked a greater understanding of the key themes of regionalism, materiality, landscape, and conservation that are just as resonant and relevant today.

As introduced by Treib, Yeon is best know for his residential design, embodying the concept of ‘regional modern architecture’ and designs shaped by “sensitive siting, planning, masses, use of wood, and accommodation of contemporary living” the epitomy of which is the Watzek House completed early in his career in Portland in 1937.  This style “set the bar for many of the region’s houses that followed in its wake.”  The exterior rooflines juxtaposed with Mount Hood in the background, and the amazing interior wood detailing ground this as a touchstone worthy of exploration.

Beyond being a residential designer, Yeon, who was largely self-taught, brought a passion for many causes surrounding conservation and planning throughout his career, becoming a vocal advocate for landscape preservation, sensitive roadway design, scenic areas, all stemming from his regionalism of a different sort, his roots in his home place.  As Treib mentions,

“John Yeon lived in the present, held a deep appreciation for the past, but was always concerned with the future.  He understood and was troubled by the threats that development posed to the Oregon landscape and actively sought to confront and mitigate the problems they caused.”

This included work in the Columbia River Gorge, now an officially designated Scenic Area, and his purchase of land now known as The Shire, which “became a test ground, a playground, a retreat for the architect, and a tool to inspire key activists and funders of his preservation efforts.”

The area is now the John Yeon Center for Architecture and the Landscape, operated by University of Oregon and providing a legacy appropriate to Yeon’s passion for study and education specific to the region.  “The Shire is a center for Pacific Northwest landscape studies while being preserved as an example of landscape design. It provides an educational site for the study of landscape preservation, design, ecology, and management creating opportunities for individuals and study groups to engage in research and discussion of landscape architecture, planning, conservation and preservation issues associated with the Columbia River Gorge, the Pacific Northwest region, and the nation.”

The book explores in detail many of these topics, and provides lots of in depth discussion on Yeon’s self-taught architectural vocabulary, his innovative use of materials, his advocacy and conservation efforts, as well as his life-long love of art and collecting.  It also focuses on his pursuit of architecture as a relatively solitary endeavor, and his eschewing both formal education and working for larger firms to pursue his own path. Coming from an affluent family, he had perhaps some unique opportunities to travel at a young age,  which influenced his thinking around architecture, and access to some clients that gave him opportunities beyond his age and experience.

That said, his intuition as a designer, along with his evolution among established Portland architects like A.E. Doyle (whose office Yeon worked briefly) and contemporaries such as emerging talents like Pietro Belluschi offered some structure and assistance on projects.  As Treib mentions, “It is evident that in the early stages of their training, an exchange of ideas and influences passed between Yeon and Belluschi”.

The interior and exterior relationship of Watzek house is thoroughly modern, and Yeon’s feel for exterior environment is deft.  The courtyard and pool engaged the house on all sides, as Treib outlines:
“The Watzek house and landscape were conceived as an interrelated unit, but within that unity, Yeon played an intensified landscape of native species against areas — such as the courtyard and the zone outside the living room — that stood out as designed spaces.”
The use of the borrowed native Pacific Northwest landscape seemed to fit the design more than the actual design plantings, which in a residential context makes sense, with some plantings strategically employed for functions like screening and directing views, or to create and reinforce outdoor rooms.  The strong connection of architecture and landscape influences my design aesthetic, embodied in the formalism of the Watzek house portico, where Yeon “projected the interval between the portico posts as lines of paving stones set within the lawn, in effect, using rows of stones to echo the rhythm of the house architecture in the softest of voices.”

These concepts were not unique to Yeon, but still define much of regional modern design today, and at the time, much like his architectural style, were fresh and new.  Architects will also appreciate his experimentation with ‘ventilators’ which allow for user control of interior environments.  I also appreciated the deep dive into the Watzek house, as well as some of his subsequent work with the use of plywood as a building material, and the experimentation with modular designs strategies, all of which referenced his favorite and most regional of material, wood, but showcased the level of design detailing Yeon became famous for, using 1:1 drawings to investigate specific joints and interfaces of materials for functional and aesthetic reasons.  The sophistication of this is seen, for instance in the Cottrell House (below).

Also significant were the other plywood houses were the epitome of regional style, 9 of which were built in the Portland metro areas, like this super simple Speculative House in North Portland, built in 1939.

This also started sporting the Yeon blue-green paint he became famous for, most visibly applied to the 1948 Visitors Information Center located along Waterfront Park.

Yeon did venture beyond Portland to build a few houses in California, which is documented in the book, and he did live and work on the Oregon Coast (along with but most of his work was close to home and predominately residential.  And while he was known early for Watzek house, Treib posits that “the Swan house could claim first place as the most cohesive representation of Pacific Northwest regional modernism”

The book moves from residential architecture and design to art collecting and museum work which occupied much of his later life, along with the active conservation work mentioned previously.  This aspect will be enjoyable to those passionate about and interested in the history of Northwest environmentalism, as Yeon was a heroic figure in many of the fights for beautiful and ecologically significant places we enjoy today.  Chapter 7 highlights much of the work on the Oregon Coast, and the Columbia River Gorge, where Yeon served by appointment on the State Parks Commission at the age of 21 and fervently fought even then, using his own funds to buy land that was threatened, again owing to his not small amount of privilege.

He wrote letters on scenic beautification of highways, making cogent arguments on the impact of road designs that did not follow the contours of the land, and the need to plant wide enough areas to allow for visual impact and survivability.  As Treib points out “This knowledge of forestry and road design for a twenty-one year old is impressive, as is the young man’s confidence in lecturing men with decades of experience beyond his own.”

The early work on sensitive siting of roadways, such as the alignment of Highway 101 on the Oregon coast in the 1940s, evolved through the work in the 1960s dovetailed with larger interest in roadside beautification with work from designers and advocates alike striving for a more beautiful landscape experience and a more sensitive approach to road design, perhaps harkening back to the approach that Frederick Law Olmsted took a century before.  Yeon’s work focused this larger trend, with an eye towards the particular landscape experience, as Treib summarizes:
“Yeon was an evangelist for the Oregon landscape.”

The Shire was the major reflection of this trend, where Yeon fought against the wind and elements of the Gorge to shape a partly natural and partly designed space.  “Yeon’s design for the landscape, developed over decades, lovingly integrated land and water.  The tightly mown, and level-edged paths played effectively against the high grasses that blanketed most horizontal surfaces.  Paths traversed meadows, climbed outcroppings, and skirted the river — all aesthetically considered.”

The final chapter sums his focus on spending more time on projects benefiting the social good, and while he still did some residential work.  He fought for more scenic highways near Multnomah Falls, and championed designs for the Portland Waterfront Park, as well as holding the torch for a Pacific Northwest modern style that influenced architecture today.  It’s interesting reading the last chapter on how Yeon grappled with the concept of regionalism, and his role in defining it.  While the Watzek house and other residential designs were regional in form and material, he still presented that “the very existence of “a Northwest regional style of architecture is debatable”.  The connection to the land is an important factor, as well as the connections between folk architecture.

“We like to think that the visual character of the landscape shaped the vision of its inhabitants so that they conjured up [and] translated the spirit of the place into forms which were habitable.  Possibly people and landscapes have so modified each other that it is impossible to tell from the resulting composite regionalist landscape which influence is the primary one.  When we see this … phenomenon from the past, it is perhaps strongest where the inhabitants were unsophisticated — for knowledge of a broader world caused a seepage of alien influences which diluted the special regional flavor.” (251)

This concept of regionalism is perhaps the most compelling part of the narrative of the book and the life of John Yeon.  Regionalism as a stylistic element, but also regionalism as a way of living and loving the place you inhabit.  An amazing life makes for good reading, and Treib does a great job packing a lot of diversity into an easy to absorb story.  As a man with that took a unique path, John Yeon benefited much from his privilege to have the freedom to pursue his passions in a less formal way could have become a path of self-indulgence.  He was an artist, but his passion for the Oregon landscape and his life-long pursuit of it’s protection made him a true, regional hero.