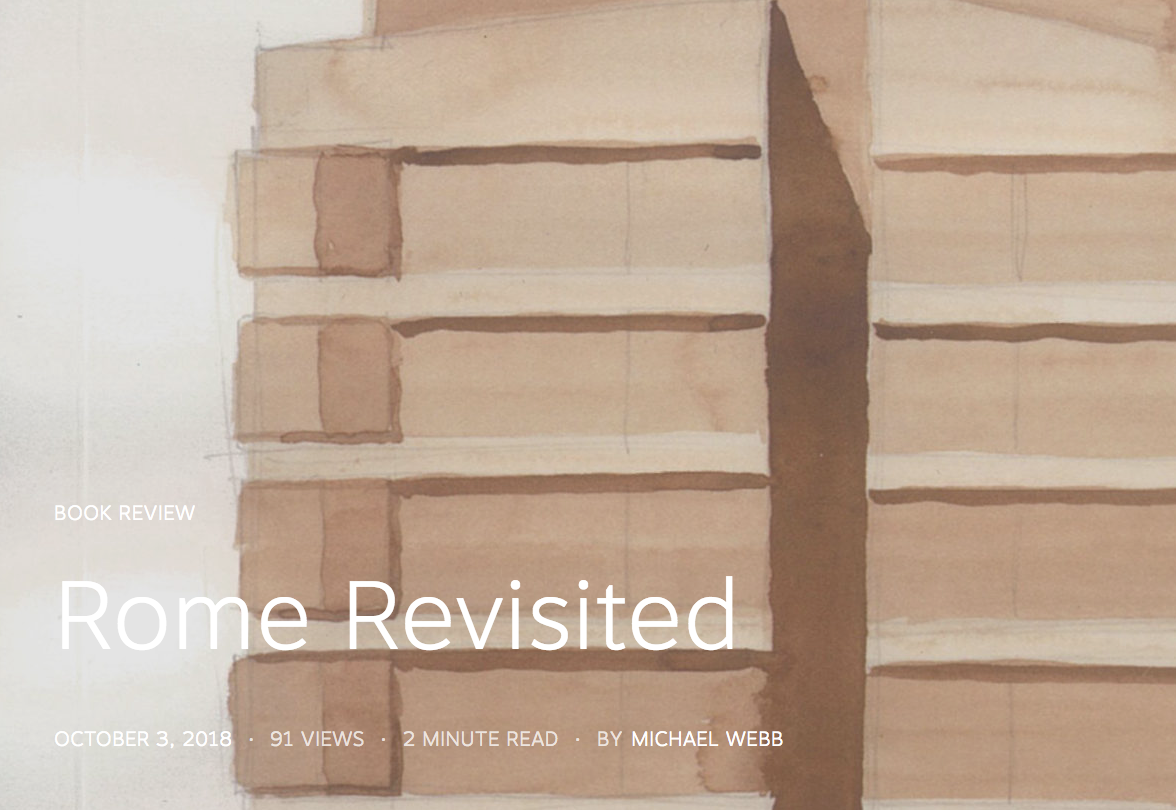 Two architects with a passion for watercolors draw on their experience as Fellows of the American Academy in Rome to provide this illustrated commentary on iconic buildings in the Eternal City. The frame for their erudite text is the book, Complexity and Contradiction in Architecture, which Robert Venturi wrote in 1966 following his two year fellowship at the Academy. Fisher and Harby quote his text on nearly 30 Roman buildings–mostly Mannerist and Baroque–which he cited as exemplars of his theme. To these, they’ve added their own descriptive text.  Their watercolors–abstracted or richly detailed–add another layer to a slim volume that doubles as a guidebook and a lesson in architectural history.

Rome is a palimpsest of styles and accretions, built up over three millennia, and it’s easy to be overwhelmed by the celebrated landmarks and dense urban fabric. Every step brings a fresh vista and a glimpse of a sunlit building at the end of a narrow street. First-time visitors try to see all the famous sights in a week and exhaust themselves. A happy few–like the authors– enjoy a residency that allows them to look closely, one building or complex at a time, and puzzle out the details, as Venturi did.  All three architects are fascinated by Michelangelo, Bernini, and Borromini, who immersed themselves in the history and power politics of Rome and produced highly original variations on the conventional typologies of churches, palaces and public spaces. They put their stamp on the city and inspired successive generations of architects.

Fisher and Harby are the latest in a long line of perceptive observers, who succumb to the spell of the city, but provide a clear-sighted analysis of its parts. Their text, sketching in the history and context of each building,  conducts a dialogue with the ephemeral play of light and shade in their illustrations. And they understand the broader significance of a city that has survived barbarian attacks, from the Goths to the tour buses of today, without losing its soul.  As they write in their conclusion, “The story the stones and waters of Rome tell is about how we as individuals and societies create meaning and focus in our confusing times.”