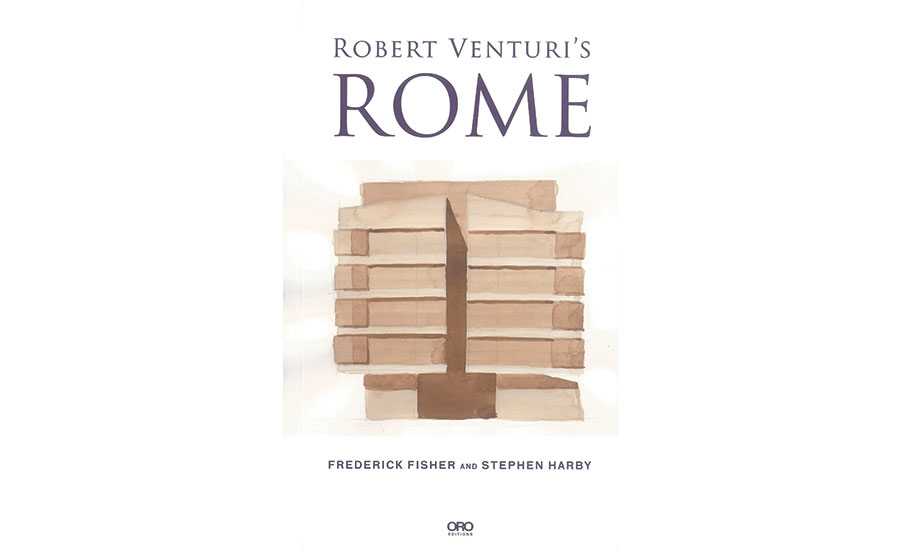 Review of Robert Venturi’s Rome, from the Architectural Record

After the publication of Robert Venturi’s Complexity and Contradiction in Architecture by the Museum of Modern Art in 1966, many of Venturi’s peers began to see his treatise as a liberation from the orthodoxies of high modernism. Soon the book was hailed as a source text of the Postmodern critique. The continuing significance and relevance of Venturi’s “gentle manifesto” is exemplified not only by the fact that it has remained in print continuously, making it the museum’s longest-run publication, but also by the various conferences, exhibitions, and festivities for the 50th anniversary of the publication two years ago.

Frederick Fisher and Stephen Harby’s handsome and lavishly illustrated booklet is another celebration of Complexity and Contradiction’s achievement. For both authors, Venturi’s thinking was transformative in their architectural education and decisive for their careers as practicing architects and educators. Their book is predicated on the notion that the work was fundamentally informed by Venturi’s two-year tenure as a fellow at the American Academy in Rome in the mid-1950s. Fisher and Harby take the reader on a journey of nearly 30 Roman places that demonstrate Venturi’s “revolutionary” ideas. They are not the first to notice: given the attention the architect’s intellectual formation has received over the last few years, it is surprising not to find any mention of existing scholarship on this topic in Fisher and Harby’s volume.

Half travel guide, with useful background information on some of the buildings addressed by Venturi in 1966, and half commentary on Complexity’s text, the book seems undecided whether it wants to be a useful cicerone for architectural explorations of the Eternal City or an investigation of Venturi’s concepts. As a result, it fulfills neither function satisfactorily.

The methodological dilemma is evident in the structure of the book, which follows that of Venturi’s 10 short chapters. Each explores different aspects of what might be considered complex and contradictory in architecture. Within this structure, the authors select short quotations from the original text addressing select examples of Roman architecture from antiquity to modernity, supplemented by detailed descriptions of the particular building as well as historical and other useful background information (such as opening times and accessibility). Fisher and Harby’s descriptions are accompanied by beautiful, impressionistic, and atmospheric watercolors of the spaces and facades; a separate introductory chapter discusses the advantages of the medium to reveal the effects of chiaroscuro for the various buildings under discussion.

Yet the burden of discerning spatial analysis relies almost exclusively on the text, and Fisher and Harby’s sometimes lengthy descriptions are not always successful in evoking a strong mental image of a certain architectural feature. Given their exclusive focus on Roman examples, it is not surprising that the majority are from the Baroque and Roman period (even though the cover is adorned by the facade of Luigi Moretti’s stunning Casa del Girasole in Parioli of 1950, admittedly one of the buildings most influential on Venturi’s career). Moreover, the authors don’t reveal how and why these 30 Roman buildings were chosen while others were left out. The selection appears to be primarily based on personal preference, adding further to the somewhat esoteric character of this book. Despite these misgivings, fans of Venturi and of Rome will find many worthwhile observations in this homage.