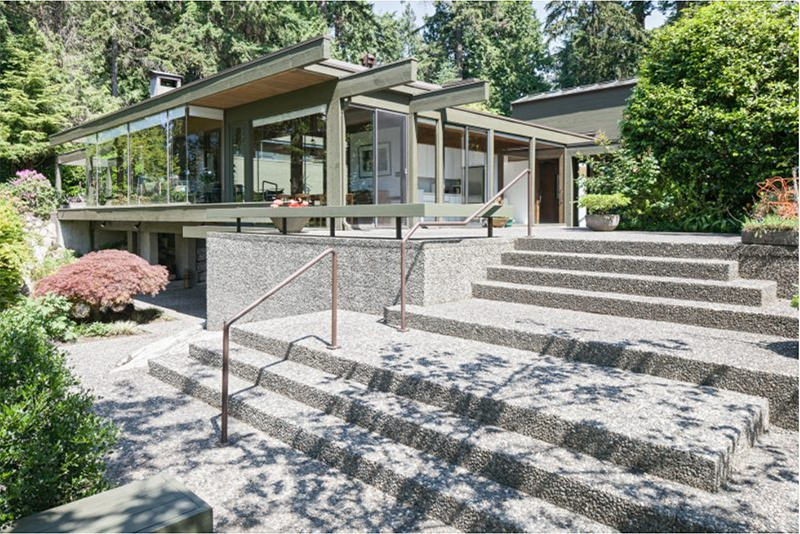 by Michael Prokopow, with photography by Michael Perlmutter and foreword by Douglas Coupland

California musician and publisher Gordon Goff launched ORO editions in 2006 as a vehicle for producing “bespoke publications” on architecture, art, and design.

The small and handsome book under review is the most recent title in ORO’s UBC SALA / West Coast Modern House Series, “SALA” being an acronym for UBC’s School of Architecture and Landscape Architecture. The series is edited by Sherry McKay and Leslie Van Duzer, who both teach at SALA.

“Smith House II” is archispeak for the second residence that architect Arthur Erickson created for artists Gordon and Marion Smith. Designed in 1963 for a challenging waterfront site near Lighthouse Park in West Vancouver, the house was completed three years later.

The remarkable cedar-and-glass structure blurs the lines between house and landscape. It grows upward as a “square spiral,” as Erickson called it, around an open central courtyard, taking the West Coast post-and-beam manner to a new and higher level.

Prokopow properly credits Erickson’s integration of Japanese sources and the American minimalism of Ludwig Mies van der Rohe and Philip Johnson. Perhaps the author overstates these debts when he writes that the house “constituted a visionary recasting of modernist forms where the functional and philosophical traditions of historical Japanese princely and domestic architecture predominated” (p. 16). To this observer, these borrowings take a secondary role behind the architect’s own skilled command of form, space, and light. The house is a masterpiece of our time and a gem in the heavy crown of an extraordinary designer.

The editors’ opening notes reveal Prokopow’s friendships with Erickson and the Smiths, which brings into question his ability to consider the subject objectively. More problematically, the architect is identified throughout as Arthur Erickson, whereas the house was a product of the fertile partnership of Erickson / Massey.

The book cites the firm twice, but nevertheless overlooks Geoff Massey and his contributions. It was Massey who kept Erickson grounded during his formative years, from around 1963, when they jointly entered the competition for Simon Fraser University and designed the Smith House, until 1972, when the partnership dissolved. The steady-handed Massey graciously retreated into the background as the volatile Erickson was showered with praise.

Readers will hope that the books in the series will collectively define their subject, the West Coast Modern house. The term is used widely and variably in the literature. However, this may not come to be. The editors curiously duck the challenge and declare that “Perlmutter’s images lay bare the truth that the so-called ‘West Coast Modern’ style is indeterminate indeed” (p. 7).

The book is small (21 x 14.5 cm) and thin. Its 80 pages include a 15-page “essay,” of which 9 pages are text, with another 32 pages of first-rate colour photographs by Michael Perlmutter, 10 pages of newly-made and austere line drawings, a short foreword by Douglas Coupland, front matter, endnotes, and a chronology. To its credit, it reproduces a pair of classic photos of the house, one each by Selwyn Pullan and John Fulker (pp. 17, 22-23).

Smith House II certainly deserves celebration in a monograph. The diminutive size of this volume and the previous titles in the series may well carve out a niche for small-scale, budget-priced handbooks in a market dominated by luxury tomes. Books-on-a-budget notwithstanding, this title required fundraising support, as presumably did previous volumes.

A half-dozen individuals and organizations are identified as having backed the present volume. This raises the troublesome question of the sustainability of an architectural press with Canadian connections, and that in turn reflects the relatively low value that our society places on architects and architecture. This reviewer can only hope that the publishing industry and its marketers act boldly and find ways to interest the general public in looking at, and reading about, the buildings and communities that surround and define us all.