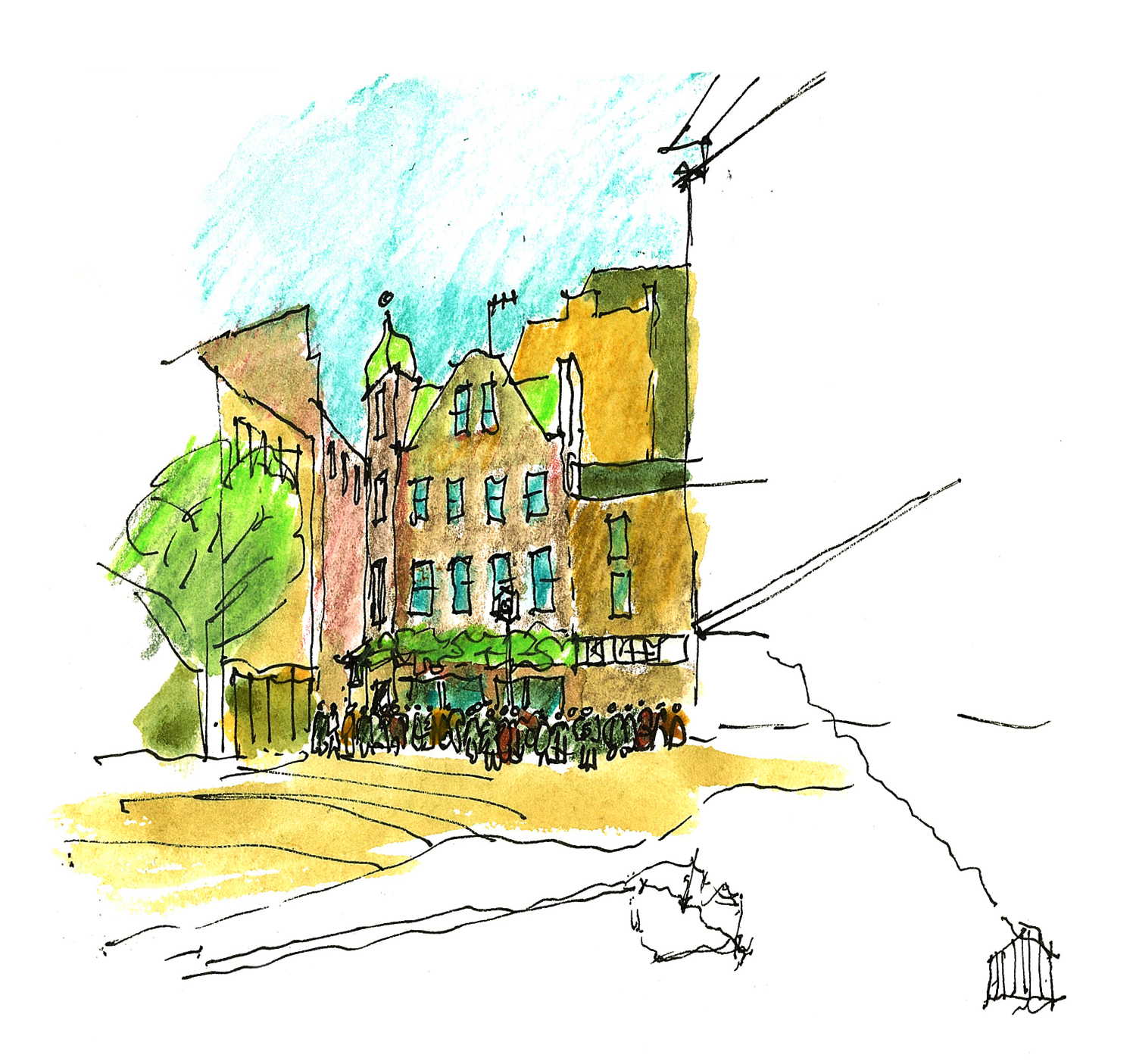 Architect’s signature drawings go beyond art. They tell stories of the world around us.

Raleigh architect Frank Harmon sketches at least once a day, in a style that’s best described as economical. His lines are spare, a squiggle inserted here or there for punctuation and a splash of color added for emphasis.

“There are as few gestures as possible to capture a multi-layered spirit,” says New York Tod Williams in an interview about Harmon’s work. “There’s almost always an element of landscape and something out of the ordinary and something extraordinary. A world emerges.”

The essays accompanying Harmon’s drawings bring to mind poet William Blake’s desire to see a world in a grain of sand – and then some. Each essay, about 200 words, is Harmon’s effort to tease out the complex and emotional tethers of an object, a building or a place. It’s not poetry, but a series of words held together with depth and dexterity.

“They’re a quick window into a truth, a condition,” says Marlon Blackwell, principal in the Arkansas firm that bears his name. “He’s asking us to go deeper and grander with a historical perspective and to understand why things are the way they are – it’s more the ‘why’ than the ‘what.’”

A selection of 64 of his drawings, with equally thoughtful essays to accompany them, are in a new book called “Native Places: Drawing as a Way to See.” They’re taken from Harmon’s online collection of sketches and words in his “Native Places” blog, which he has published the past four years.

“I wrote the book to make it possible for people to see outside their own world, whether they’re in a car, an office or a bus,” Harmon said in an interview. “We live our lives so focused on getting somewhere or doing something that we don’t notice where we are.”

That’s not a situation this 70-something has struggled with since he retired. The Greensboro native spent much of his professional life teaching at NC State and practicing in North Carolina.

He defines the world through his experiences with it, whether seeking meaning in wildflowers by the roadside, a row of farmers’ plows in Provence, France, or slavery at Stratford Hall, the childhood home of Robert E. Lee in Westmoreland County, Va.

“I drove up and sketched (Stratford Hall) and saw a road cut into a hill that goes down to the river – and it was very striking, this road,” he says. “It was an epiphany for me, because this is where slaves, mules and wagons went down with cotton – you see the river and imagine the ocean beyond, and Africa beyond that.”

He’s been drawing since he was a child, through two years at NC State, another five at the Architectural Association in London and a stint at Richard Meier & Partners Architects in New York.

Over time, his drawings have become his signature.

“They aren’t beautiful or works of art,” said Williams, who also worked in Meier’s office in the 1960s and, with Billie Tsien, is currently designing the Obama Presidential Center in Chicago. “Actually they’re just incredibly clear observations with very few superfluous lines.”

Harmon’s work recalls the ethical musings of cultural critic/poet Wendell Berry and sometimes, the sharper moral edges of novelist/poet Jim Harrison. The net effect is a marriage of thought and language that yields more than the sum of its parts.

“He addresses the greater issues and the lessons we should be bringing forward in thinking about development today,” says Raleigh landscape architect Julie Sherk in an interview. “It’s accessible and beautiful writing that’s thought-provoking, spiritual and uplifting. It’s like he knew what I needed – it’s inspiring.”

At the heart of this book lies a gifted architect who has absorbed the teachings of land and light in his native North Carolina, as well as the designers here who came before him – Harwell Hamilton Harris, acolyte to Rudolph Schindler among them. His residential work is mostly flawless, his AIA North Carolina Center for Architecture and Design an iconoclastic groundbreaker.

Now, with his practice essentially behind him, Harmon is applying those lessons in his online journal and onto the printed page.

“It’s nice to get one person’s perspective on a place, and learn something about the place that’s subjective and not objective,” says Matt Griffith, a former Harmon employee and co-founder of in situ studio, a Raleigh architecture firm. “He’s able to talk about his feelings about that place and what he senses, and also the practical and factual reality of why things are what they are.”

Williams, who wrote the foreword to the book, said Harmon achieves that in a surprising manner: without letting architecture intrude.

“The idea is not to get in the way of pure observation, if you’re looking at the world with clear eyes,” he says. “Basically our own instincts are right.”

Honed to near-perfection over seven decades, Harmon’s instincts are spot-on. And now we have the book to prove it.

J. Michael Welton writes about architecture, art and design for national and international publications, and is the author of “Drawing from Practice: Architects and the Meaning of Freehand.” (Routledge: 2015). He contributed a blurb to the back cover of “Native Places,” as did Marlon Blackwell and Tom Kundig. Welton can be reached at mike@architectsandartisans.com.
Read more here