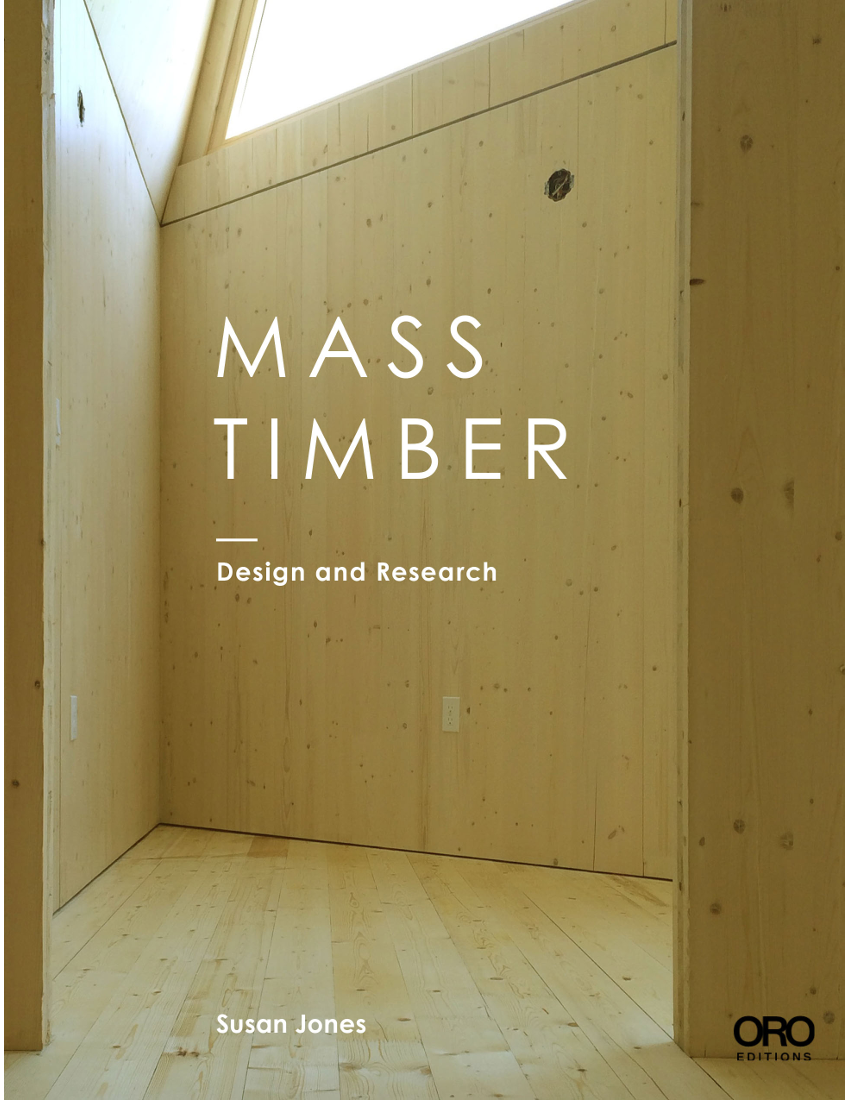 Mass Timber / Design and Research presents new research and design work with Mass Timber, a new construction technology, well-known in Europe, but relatively unfamiliar in the United States. Leading the Mass Timber design dialogue in the US, the author, Susan Jones, an architect in Seattle, Washington, has been pioneering the new, innovative use of wood over the past six years, since she built her own family’s house from cross-laminated timber in 2015 in a neighborhood in Seattle. The book presents her Seattle firm, her family, and her University of Washington students’ years of research and design. Opening with the story of three generations of her family’s own sustainable forest practices, the book presents research into Pacific Northwest forestry, timber and Cross-Laminated Timber manufacturing practices, to carbon analysis and carbon comparisons between standard building construction assemblies and technologies; and concludes with the design of model buildings both designed and built by her firm, atelierjones and her University of Washington students: including a single-family house, a church, schools, multi-family housing, and a twelve-story Tall Timber Wood Innovation tower on the University of Washington campus in Seattle.

Susan Jones, FAIA, LEED BD+C, architect, is owner of atelierjones, an architecture, urban, and ecodesign firm. Founded in 2003 in Seattle, the firm’s design award winning work brings design excellence, research, and community engagement to new sustainable strategies and buildings – including groundbreaking work with Mass Timber. atelierjones recently completed the first CLT structure permitted in Seattle in June 2015: a single family house using CLT as structure and interior finish material, and a church, using CLT as a 40’ high, interior non-structural wall completed in March 2016. Both are two of the first CLT structures completed in the US. A nationally known expert on Mass Timber, she is the AIA National Representative to the ICC Tall Timber Code Committee, has taught multiple design studios on Mass Timber Design, and has spoken across the US on Mass Timber. atelierjones is now completing two modular CLTSchools to be completed in spring of 2017. A third generation native of Washington State, Susan became a Fellow of the AIA in 2010, and has been working for architects since she was sixteen.

Overview of the interview with Susan Jones :

To begin, Susan explains the difference between Mass Timber and Cross-Laminted Timber (CLT). CLT first started in the 1990s in Europe, and it’s a new product made out of an ancient one (wood). « Mass timber » is the term used to describe the entire system of CLT products.

The way that CLT/mass timber works is that, essentially, a 2×6 panel of wood is cross-laminated with another 2×6 panel, and layered over and over. This isn’t the light-frame wood often used in construction; it’s a really solid and massive wooden panel. Mass timber and CLT are important for helping developers and builders find alternative ways to replace carbon-emitting building systems like concrete and steel.

Susan used mass timber while building her own house (the first home in Seattle ever permitted for Mass Timber construction), and this taught her a lot about the product itself. Using mass timber also allowed her to interpret the Pacific Northwest paradigm of the small wooden cabin with very innovative means, using the material in a smart way that preserves forests, too. As a third generation Washingtonian, it was especially important for her to use sustainable resources.

The passing of the 5450 Bill in WA State has helped make it possible to create three new types of codes that can allow for construction with mass timber up to a specific height, while exposing the wood to a certain height. This means that there is more potential for building high-rise buildings and multi-family housing. As it is a bipartisan topic of discussion, being able to use mass timber may be something that people can rally behind, and it can possibly open up a new chapter for forestry and how we preserve our forests, as well as building more sustainably in cities.

Some people have expressed concerns that mass timber causes clear-cutting or other negative impacts on forests. However, Susan explains that mass timber does not have this type of impact — specifically, these products have been taken from sustainably harvested and managed forests. Mass timber made in the Pacific Northwest often uses source wood that was killed by the blue beetle fungus, so the dead wood was able to be used in a positive and eco-friendly way.

Susan also helps address cost concerns with mass timber. She shares that it’s actually hard to cost-effectively build a building between seven to twelve stories out of concrete and steel, but once there are more buildings with mass timber, it will be easier for others to understand how the costs compare.

There’s much more that goes into the process of building with mass timber, considering the design elements of it, too. The speed at which you can build with mass timber is also a bit faster. The optimistic forecast is that this can actually save 20-30% of scheduled build time, which translates into cost savings and even the potential to make money sooner if a building can be available for tenants earlier than originally planned. Multiple firms around the country are beginning to enter the mass timber industry, creating products for developers to use. This will, in itself, also drive costs down due to competitive pricing.

As an architect who pushed boundaries to try and change codes, Susan acknowledges that it takes a long time to get to this point. But she says that it’s best to collaborate with others to get these types of visionary ideas off the ground. The hope is that developers will begin to see the appeal in creating carbon-positive buildings and structures, and there will be even more opportunities to use mass timber for high-rises in major cities.