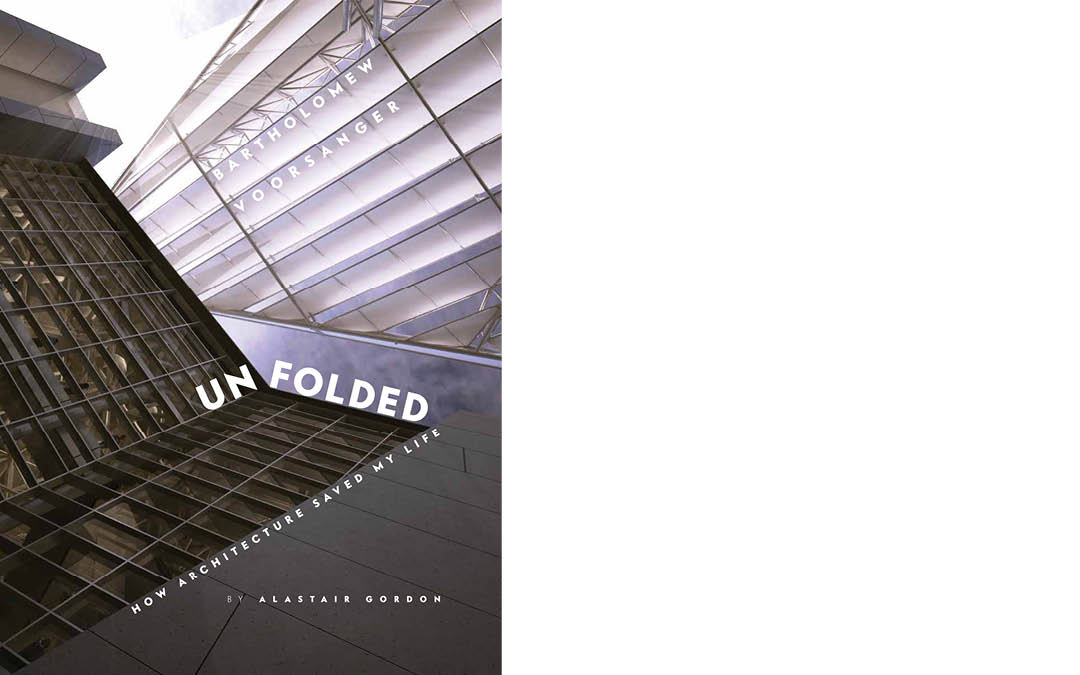 UNFOLDED: How Architecture Saved My Life

Bartholomew Voorsanger received a Bachelors Degree with Honors from Princeton University in 1960, a Masters Degree in Architecture from Harvard University in 1964 and a Doctor Honoris Causa at the University for Architecture and Urbanism "Ion Mincu", Bucharest, Romania, in 2005. He worked for three years with urban planner Vincent Ponte in Montreal, Canada and subsequently for ten years as a Design Associate for I.M. Pei & Partners. The firm Voorsanger & Mills was established in 1978 and reorganized as Voorsanger Architects PC in 1990. Projects by Mr. Voorsanger have been published nationally and internationally in numerous volumes, magazines, and articles. His work has been exhibited in individual and group shows at the Museum of Modern Art in New York, the Museum of Finnish Architecture, the Frankfurt Museum of Architecture, the Spanish Ministry of Construction Gallery, the Architectural Association School of Architecture, Harvard University, the Hudson River Museum, the National Academy of Design, the AIA Center for Architecture (NYC) and New York University. The Firm has received numerous awards both locally and nationally.

Mr. Voorsanger has served on many national and international juries for design awards, has been a speaker at numerous professional symposia, and has authored a variety of articles for design and art periodicals. Mr. Voorsanger has been invited as a guest lecturer and critic and held faculty appointments in architecture design studios at the Rhode Island School of Design, Harvard University, Columbia University, and the University of Pennsylvania. He became a design Fellow of the American Institute of Architecture in 1985. Mr. Voorsanger is a former Chair of the Board of Advisors of the Temple Hoyne Buell Center for the Study of American Architecture at Columbia University, President of the New York chapter of the AIA and the New York Foundation for Architecture. He formerly served on the editorial board of the Harvard University Graduate School of Design Magazine, and is on the GSD/HDM Practitioner's Advisory Board. He also currently serves as the Chair of Design Review for the Port Authority of New York & New Jersey.

Mr. Voorsanger is the Principal in charge of design for the firm. Some of the Firm's projects include the New York University Midtown Center, the graduate and undergraduate dormitories for New York University, the New York University Center for Advanced Digital Studies, the International Competition for The Brooklyn Museum Master Plan, The Pierpont Morgan Library Garden Court, Eugenio Maria de Hostos Community College, the Air Traffic Control Tower at LaGuardia, the Asia Society and Museum in New York, Terminal B Newark International Airport, Master Plan for the University of Virginia Art Museum, Residences at Wildcat Ridge, Charlottesville, and Tucson. Most recently a complex of villas and apartments in Dubai, the National World War II Museum in New Orleans, and the competition for the new National Military Museum for the United Arab Emirates in Abu Dhabi.

Alastair Gordon is an award-winning critic and author who has written regularly about the built environment for the New York Times and the Wall Street Journal. His critically acclaimed books include Naked Airport, Weekend Utopia, and Spaced Out. He teaches critical writing at Harvard University's Graduate School of Design, and is Editorial Director of Gordon de Vries Studio, an imprint that publishes books about the human environment. He has been awarded research fellowships from the Graham Foundation for Advanced Studies in the Fine Arts, the Geraldine R. Dodge Foundation, as well as being cited for Excellence in Architectural Criticism by the American Institute of Architects.

Toby Cecchini is a writer and bartender based in New York City. He has written on food, wine and spirits for GQ, Food and Wine, and The New York Times. His first book, Cosmopolitan: A Bartender's Life, was published in 2003. He is currently at work on his second book, a travelogue of spirits based on his travels for The New York Times' Living and travel magazines. He began bartending at the Odeon in 1987, where he is credited with creating the internationally recognized version of the Cosmopolitan cocktail in New York. He followed that with stints in several bars including Passersby, which he owned until 2008. In 2013 he reopened the shuttered Long Island Bar in Cobble Hill Brooklyn.