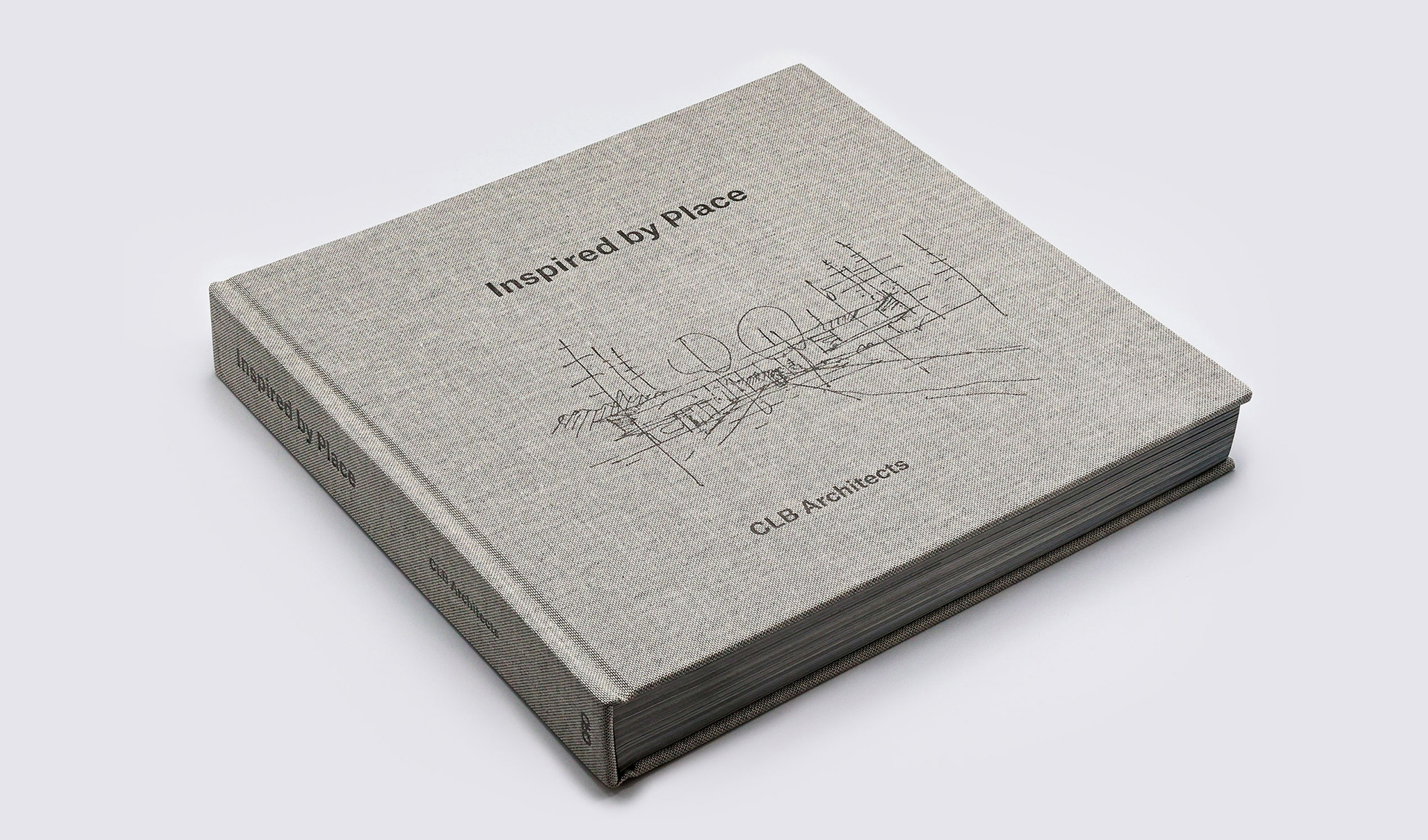 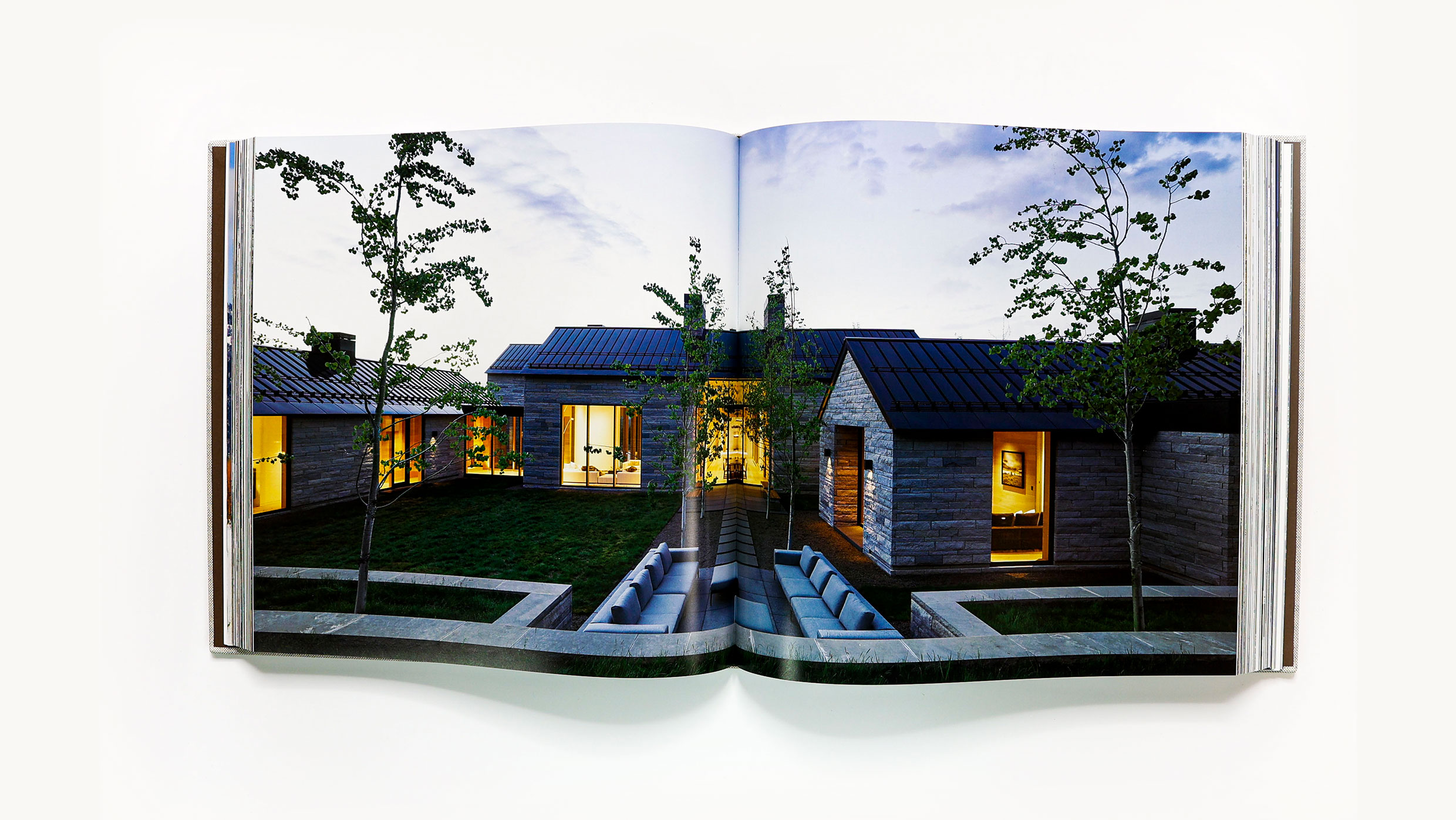 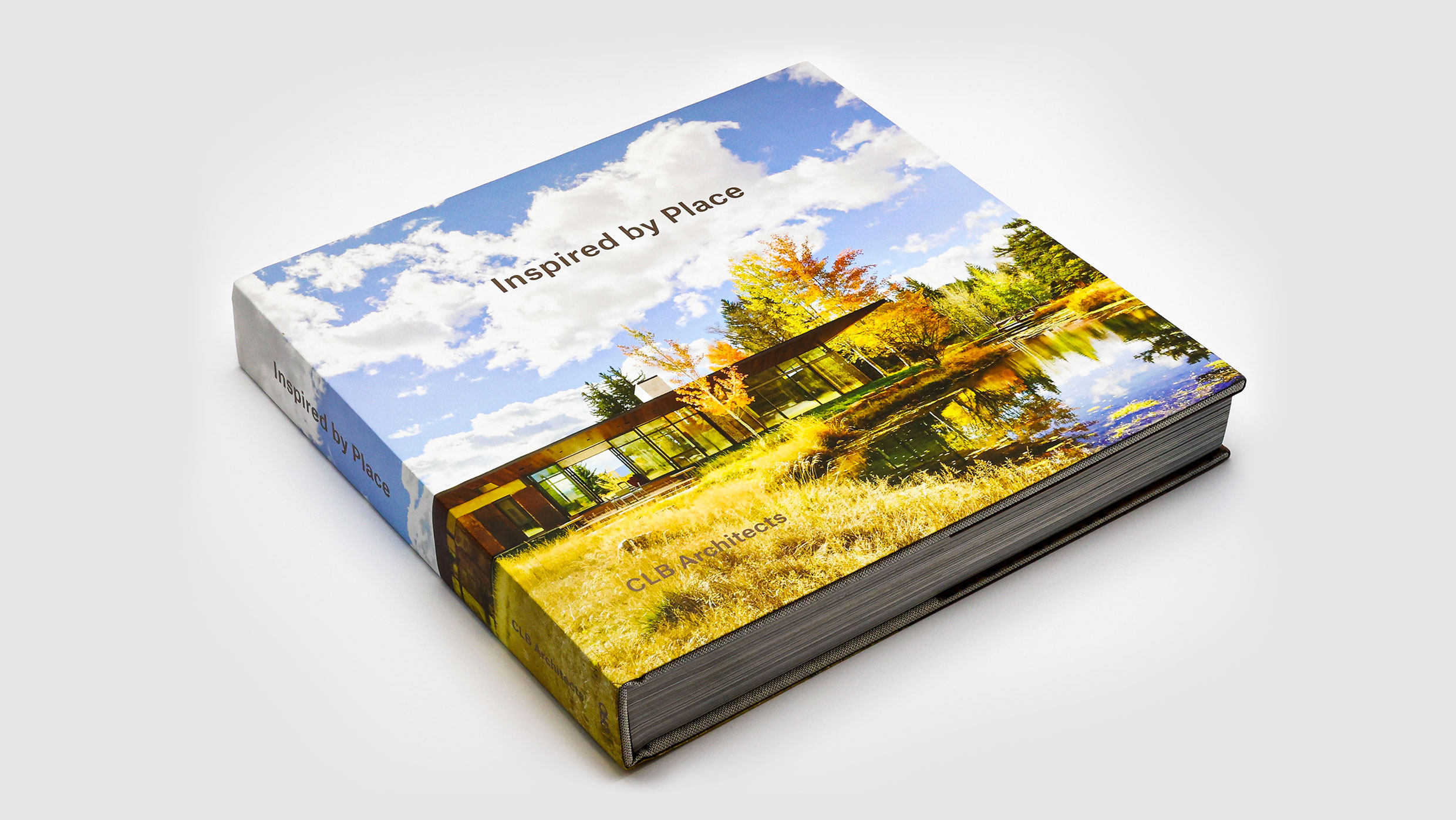 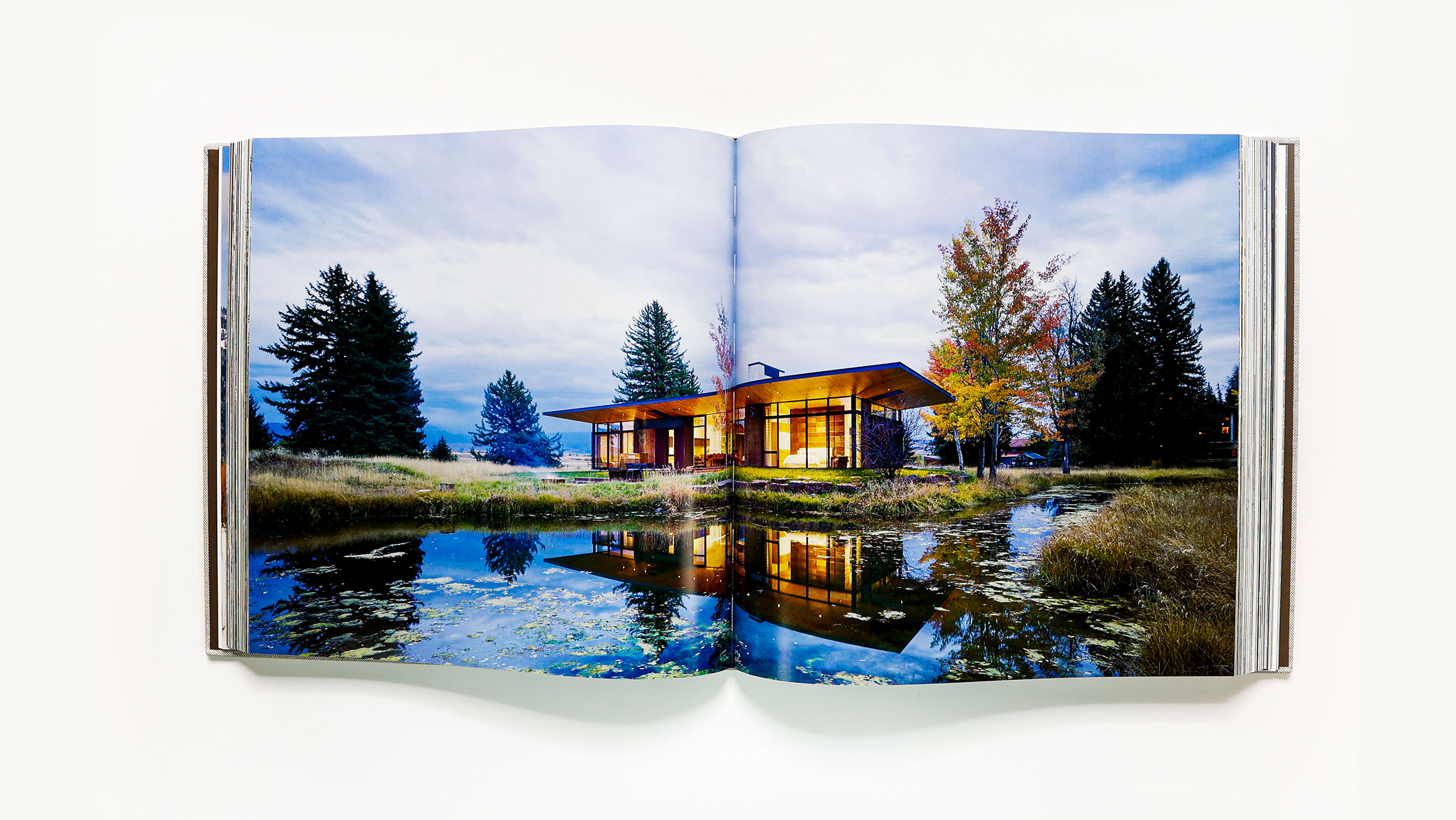 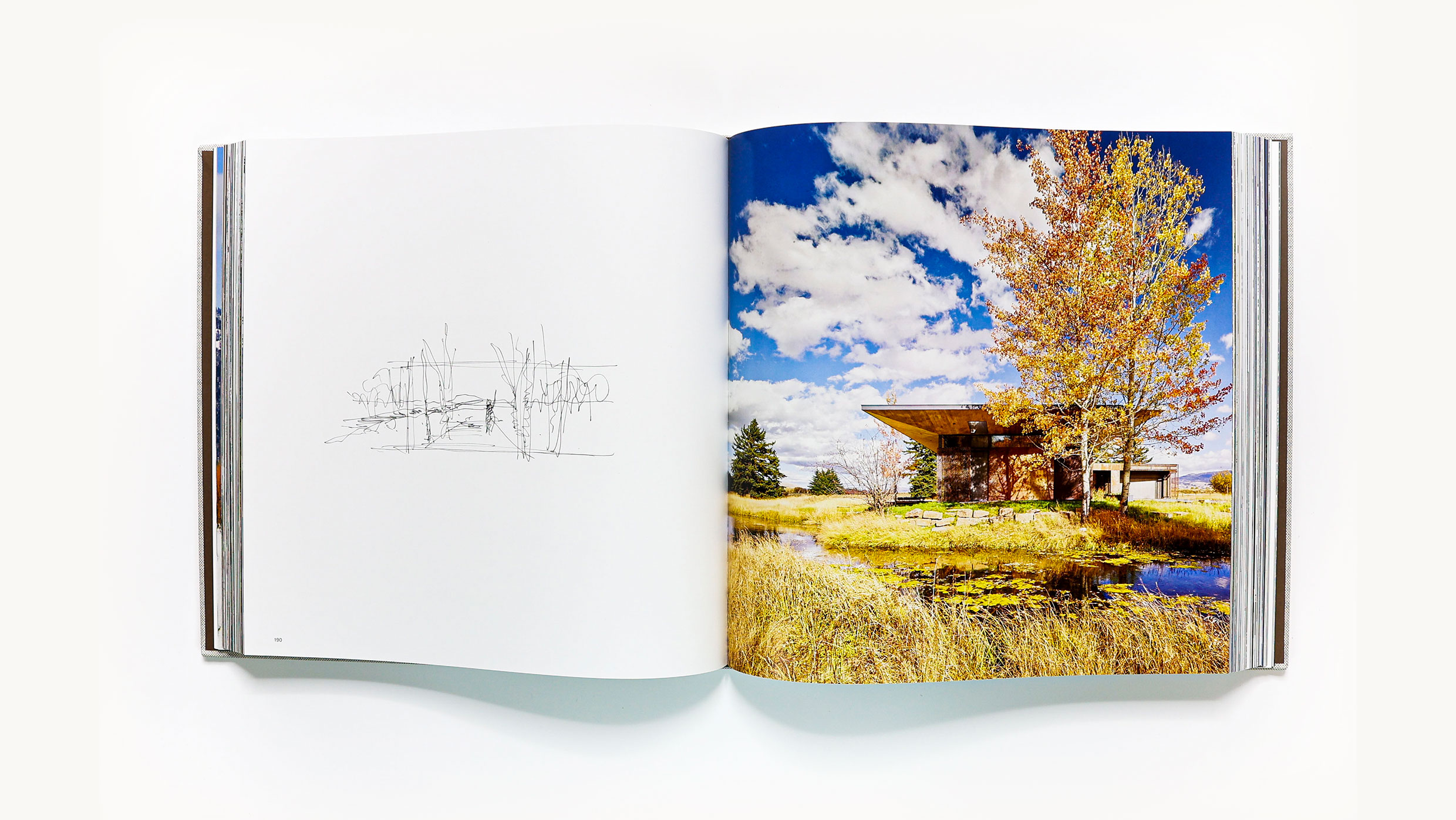 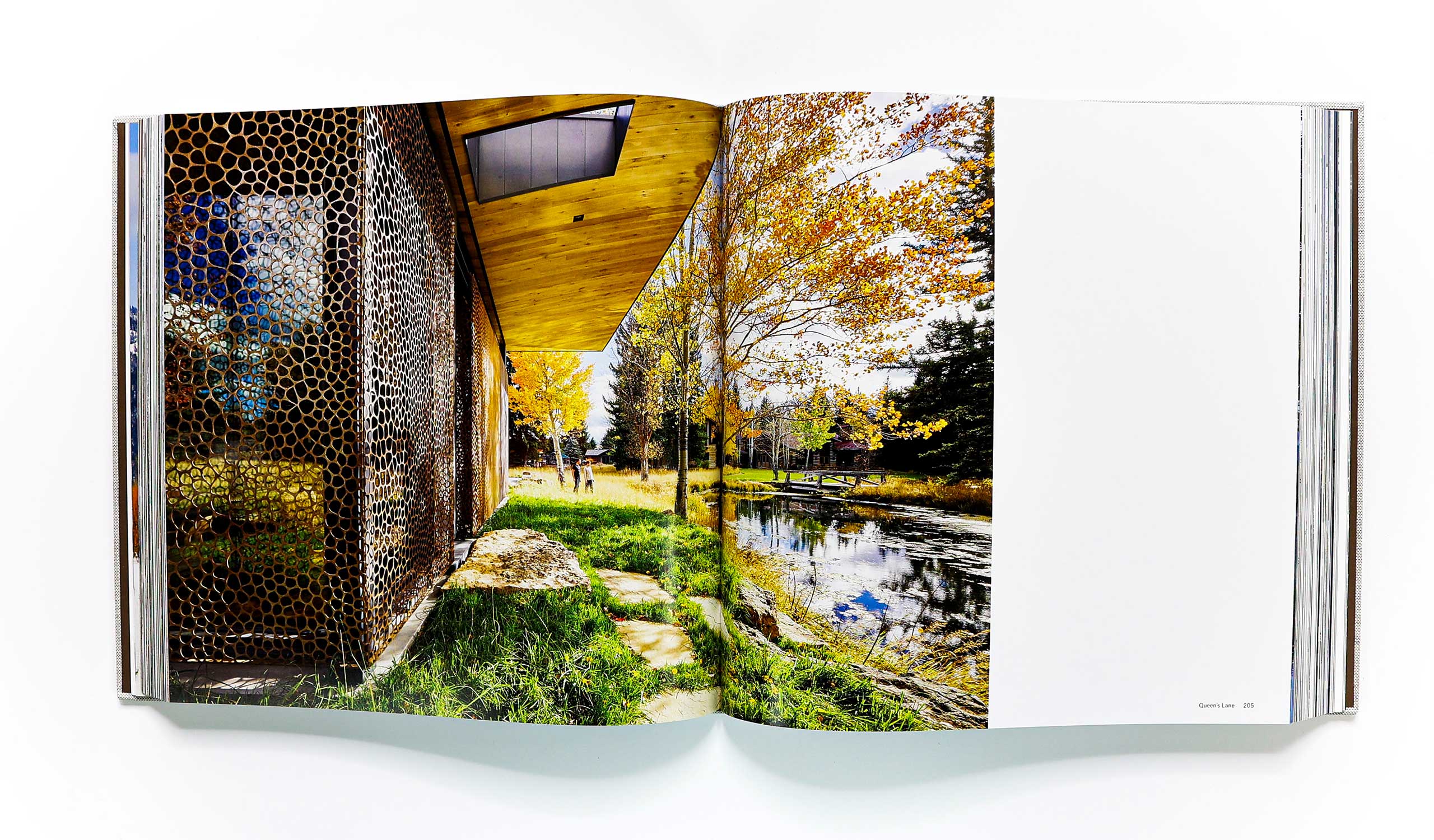 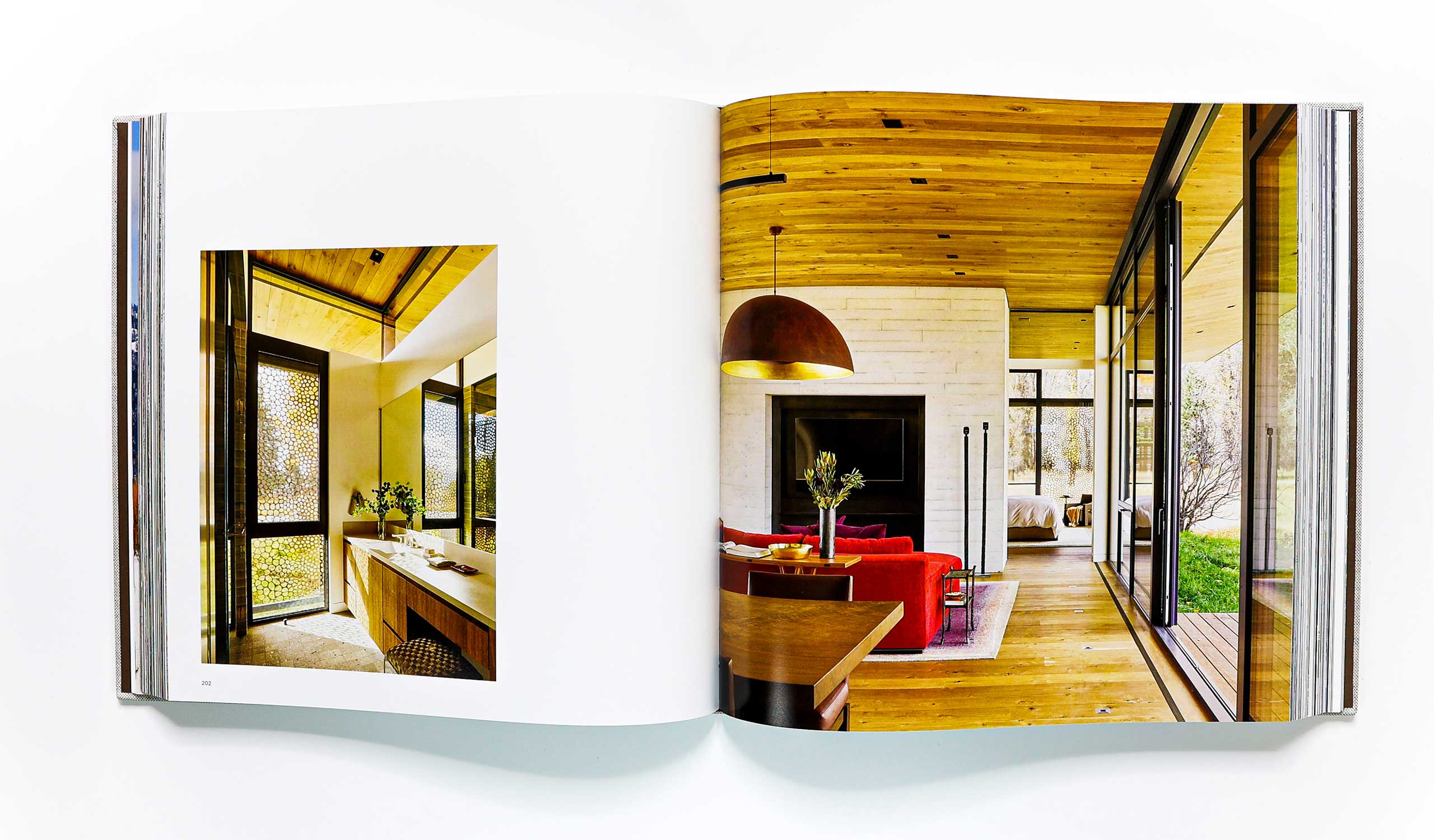 "Over the course of three decades, CLB has established an architectural language for the Mountain West — one that is original, appropriate and uniquely Inspired by Place."

Inspired by Place showcases eleven homes designed by the architects of CLB from their studios in Wyoming and Montana. A portion of the homes also highlight the group’s interior design work, which strikes a balance between sophisticated and comfortable and is conceived as a natural extension of the architecture. Evident in all CLB’s work is a bold contemporary spirit seeking original expression while referencing regional form and materials in creative ways. Whether a streamlined modern compound on the banks of the Snake River, a modest glass pavilion oriented for wildlife viewing or a home celebrating the region’s heritage in linked vernacular forms, each project is unique to client, setting, view, and the variables in nature. Over the course of three decades, CLB has established an architectural language for the Mountain West — one that is original, appropriate and uniquely Inspired by Place.

Ian Volner
Ian Volner has contributed articles on architecture and design to The Wall Street Journal, The Washington Post, The New Republic, Artforum, Architectural Digest, and The New Yorker online among other publications, and is a contributing editor at Architect and Surface. He is the author of several books and monographs, including The Great Great Wall: Along the Borders of History from China to Mexico published by Abrams Books in 2019. He lives in Manhattan.
Tom Kundig, FAIA, RIBA
Tom Kundig, FAIA, RIBA, is an owner and design principal of Olson Kundig. He has received some of the world’s highest design honors, including a National Design Award in Architecture from the Cooper Hewitt Smithsonian Design Museum, an Academy Award in Architecture from the American Academy of Arts and Letters, and the AIA Seattle Medal of Honor. His fourth monograph, Tom Kundig: Working Title, was published by Princeton Architectural Press in May 2020.
Agnes Bourne, ASID
Agnes Bourne, ASID, has been involved in design for over 50 years working on residential and commercial interiors, product design, and historical restoration. She established showrooms in San Francisco and New York, introduced her own line of furniture, and co-founded Des Art Licensing. She has taught color design at Stanford University, California College of Arts, and the San Francisco Art Institute. Agnes has been awarded medals of distinction from ASID, The Smithsonian Institution, Cine Arts, IFDA, and NAST.

AUTHOR
Chase Reynolds Ewald
Chase Reynolds Ewald is an active freelancer, columnist and editor focused on architecture, interiors, food, and travel in the American West. A graduate of Yale and the Graduate School of Journalism at U.C. Berkeley, she is a Senior Editor of Western Art & Architecture, Design Columnist for Big Sky Journal and active freelancer for Mountain Living and other publications. The author of ten books, her titles include Rustic Modern, American Rustic, The New Western Home, and Cabin Style.

PHOTOGRAPHERS
Matthew Millman Photography
Matthew has been photographing art, architecture, and design for over 25 years. Many of his earliest photographic influences came from the storied tradition of California landscape photography. The intersection of the natural and built world remains a central focus for Matthew. His photographs have appeared in a wide range of publications including Architectural Record, The New York Times, and Dwell. Additionally, Matthew has photographed books such as Art House and West Coast Modern.
Audrey Hall Photography
Audrey Hall’s relationship to cameras began when she traded in her mechanical eraser from an architectural drafting desk. Her fine art, feature, commercial, documentary, and editorial projects have appeared in a variety of media across the globe. Born in Brazil then transplanted to Montana, Audrey grew up in a multi-cultural family deeply rooted in both arts and science. A Rotary scholar, she studied fine art photography under Thomas Joshua Cooper at the Glasgow School of Art in Scotland. She has photographed over a dozen books.
Gibeon Photography
Peter and Kelley Gibeon met as photo students near Aspen; they have been based in the northern Rockies since 2003. Gibeon Photography has collaborated with creatives on architecture shoots in California golf communities, Rocky Mountain recreation towns, Central American resorts, the French Riviera, and beyond. Their work has been featured in numerous publications and coffee table books.
Warchol Photography
Paul Warchol has been photographing architecture across the globe for almost 40 years. His commissioned photography has covered a broad range of work for some of the most notable major modern architects to the Great Pyramids. Warchol received an AIA Honor Award for Architectural Photography and has exhibited at the National Building Museum in Washington, DC and Avery Hall, Columbia University, in New York. He participated in the exhibit ”Beyond the Assignment” by the Julius Schulman Institute at the LACE Gallery in Los Angeles.
Krafty Photos
Aaron Kraft is an architectural photographer and visual artist based in the mountains of western Wyoming. Both his commercial and artistic work is heavily influenced by the dramatic light and atmosphere experienced by time spent in his native environment. Aaron’s work can be seen in various media forms both nationally and internationally.
Tom Harris Photography
Tom Harris started his career as an apprentice at Hedrich Blessing Photographers where he became a staff photographer in 2013. From small practices to international firms, Tom enjoys collaborating with a wide range of architectural clients. Tom’s photographs have been widely published internationally. They can be seen in recent issues of Metropolis Magazine, The Architect’s Newspaper, and Architectural Record.

FIRM
CLB is an innovative, multi-disciplinary design firm, with a global reach, operating from studios located in the inspiring landscape of the Rocky Mountain West. More than two decades since the firm’s founding in Jackson, Wyoming, the work has evolved but the essentials remain unchanged. The studio approaches each project with strong leadership, collaboration, and diligence. A rigorous process and dedication to their craft informs original design solutions that respond to context and client aspirations. As a result, the projects are recognizable: thoughtful, innovative, and refined in their details. Each endeavor is guided with the firm’s philosophy in mind—Inspired by Place.
Since inception in 1992, the firm has grown to accommodate a staff of more than 40 led by principals Eric Logan, Kevin Burke, and Andy Ankeny. With studios in Jackson, Wyoming and Bozeman, Montana, the firm maintains an informal and collegial atmosphere that encourages individual creativity and teamwork in an open, collaborative environment. 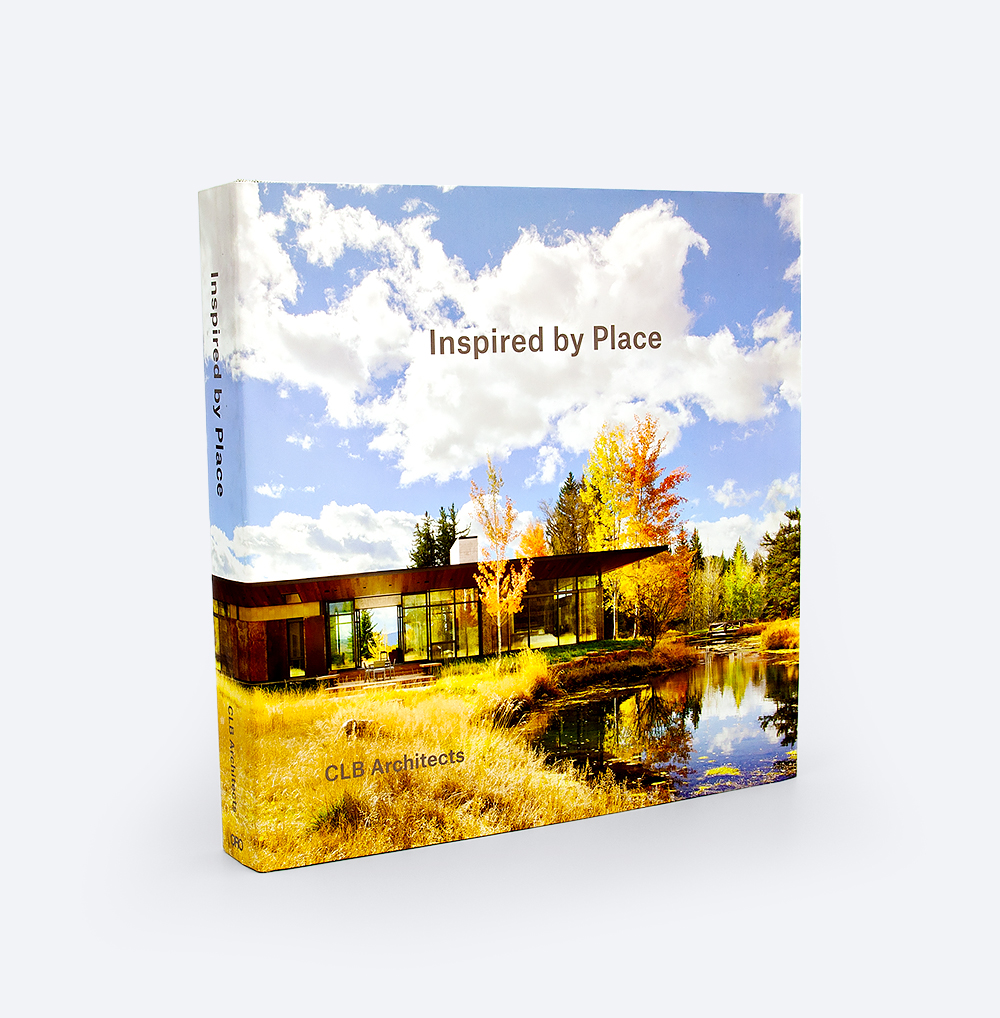 "Over the course of three decades, CLB has established an architectural language for the Mountain West — one that is original, appropriate and uniquely Inspired by Place."