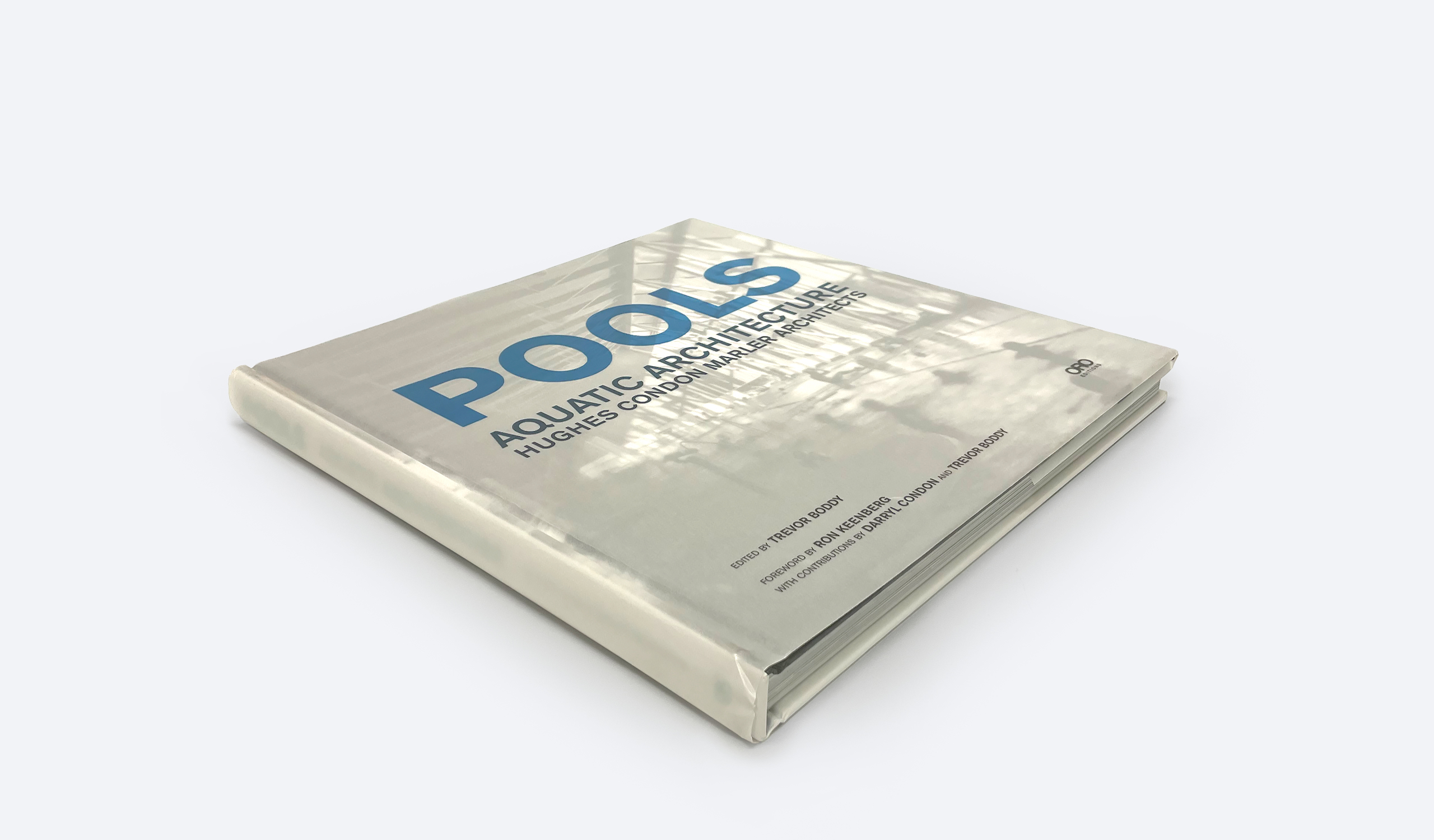 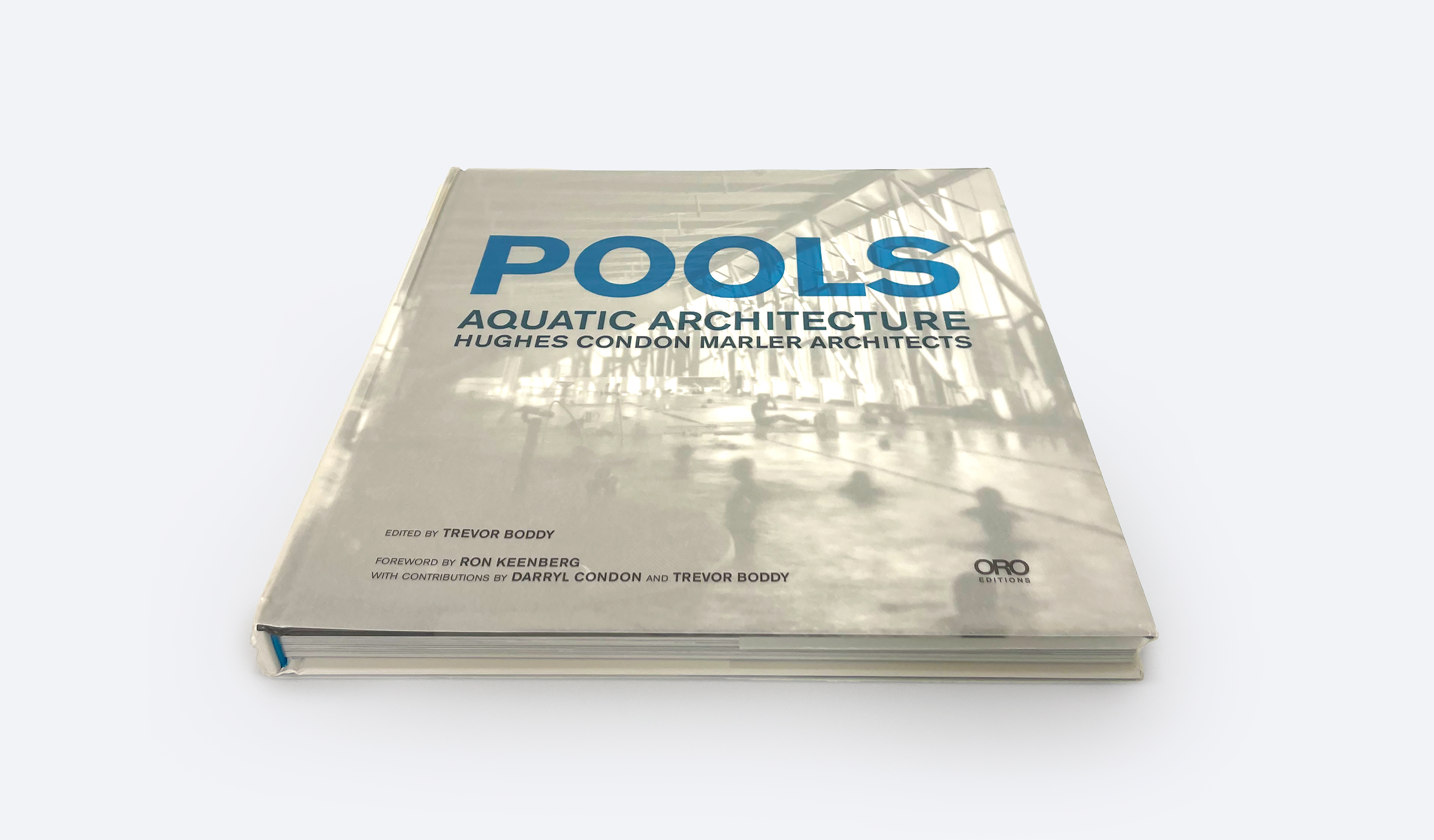 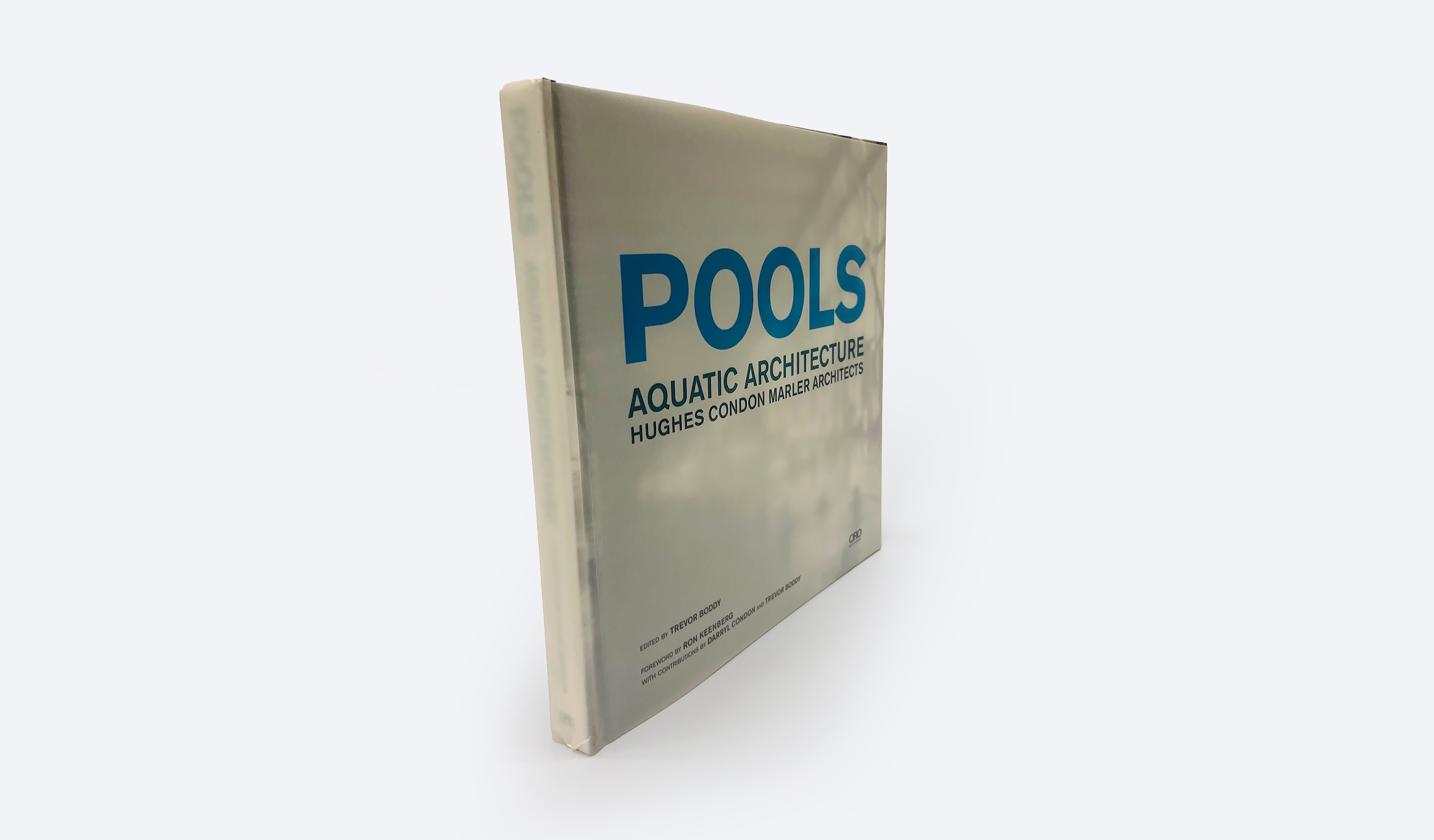 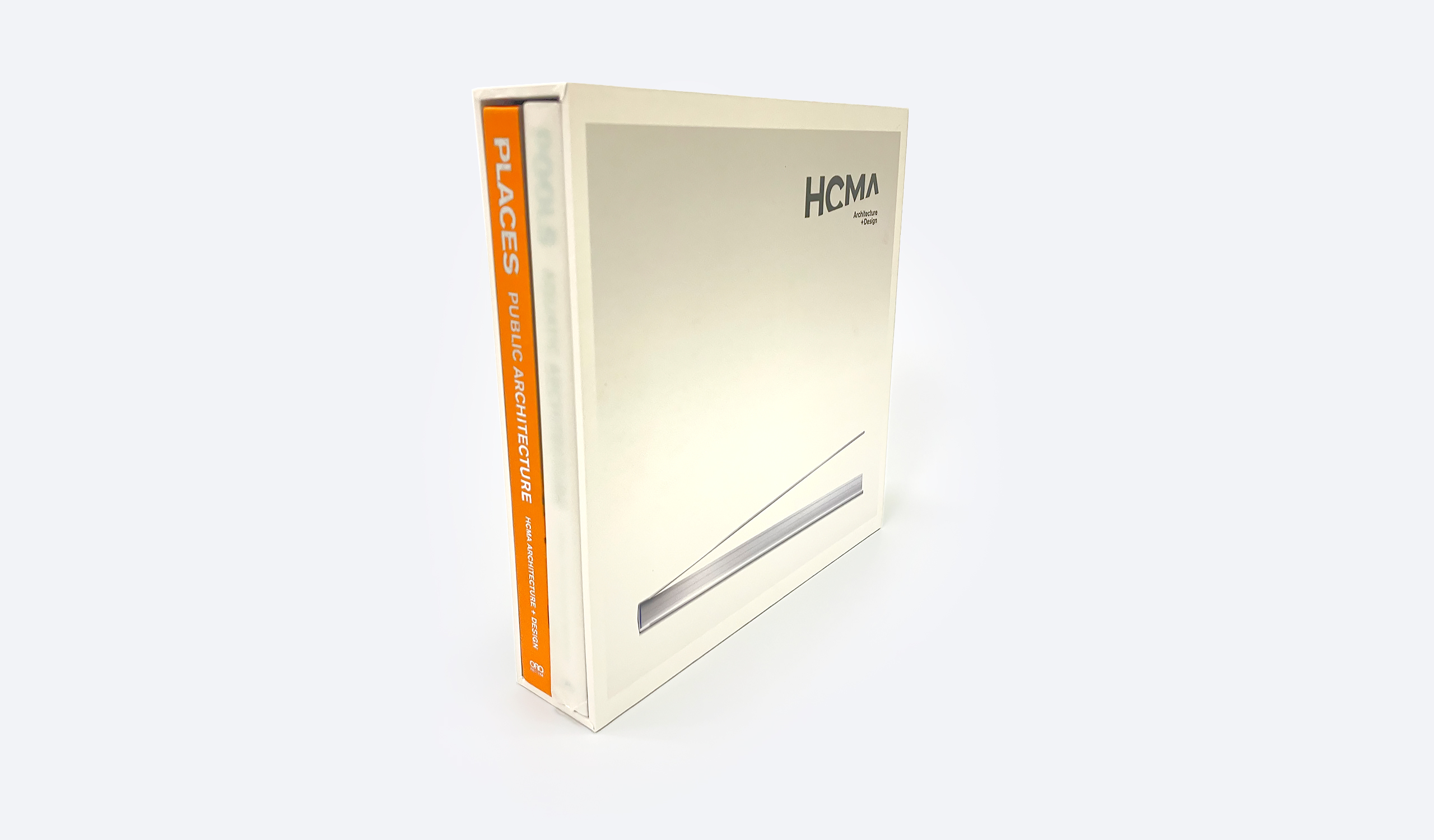 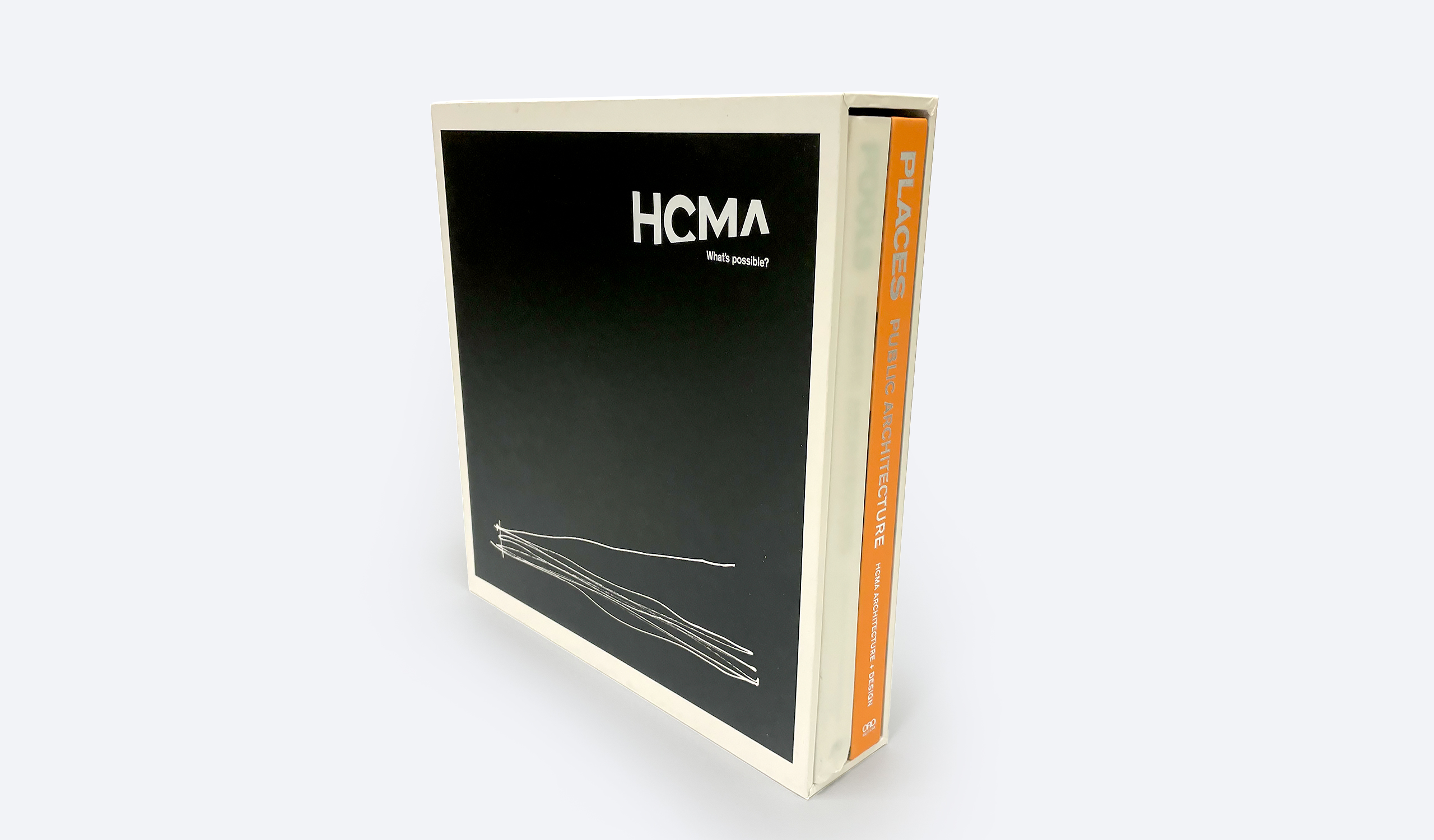 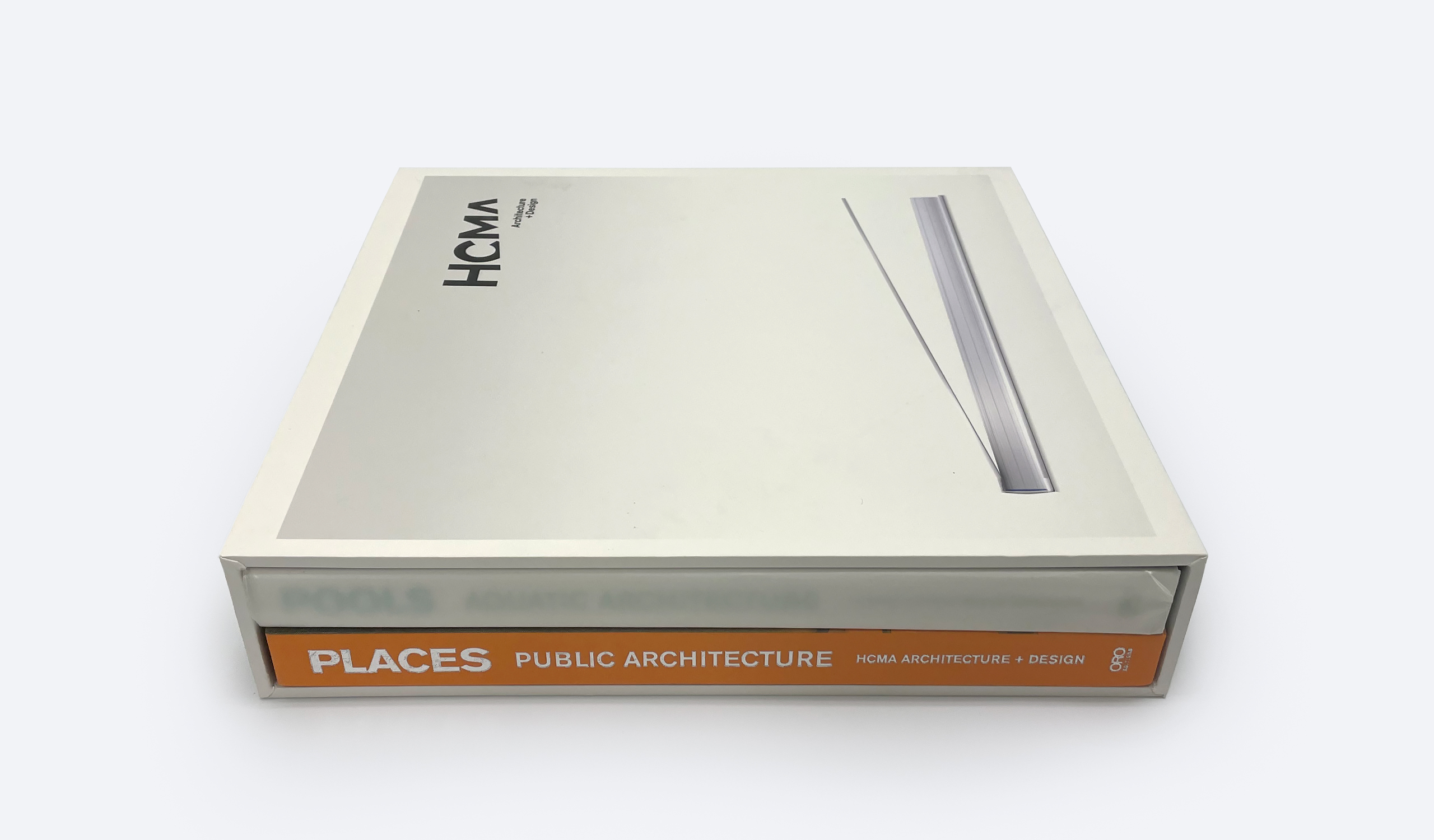 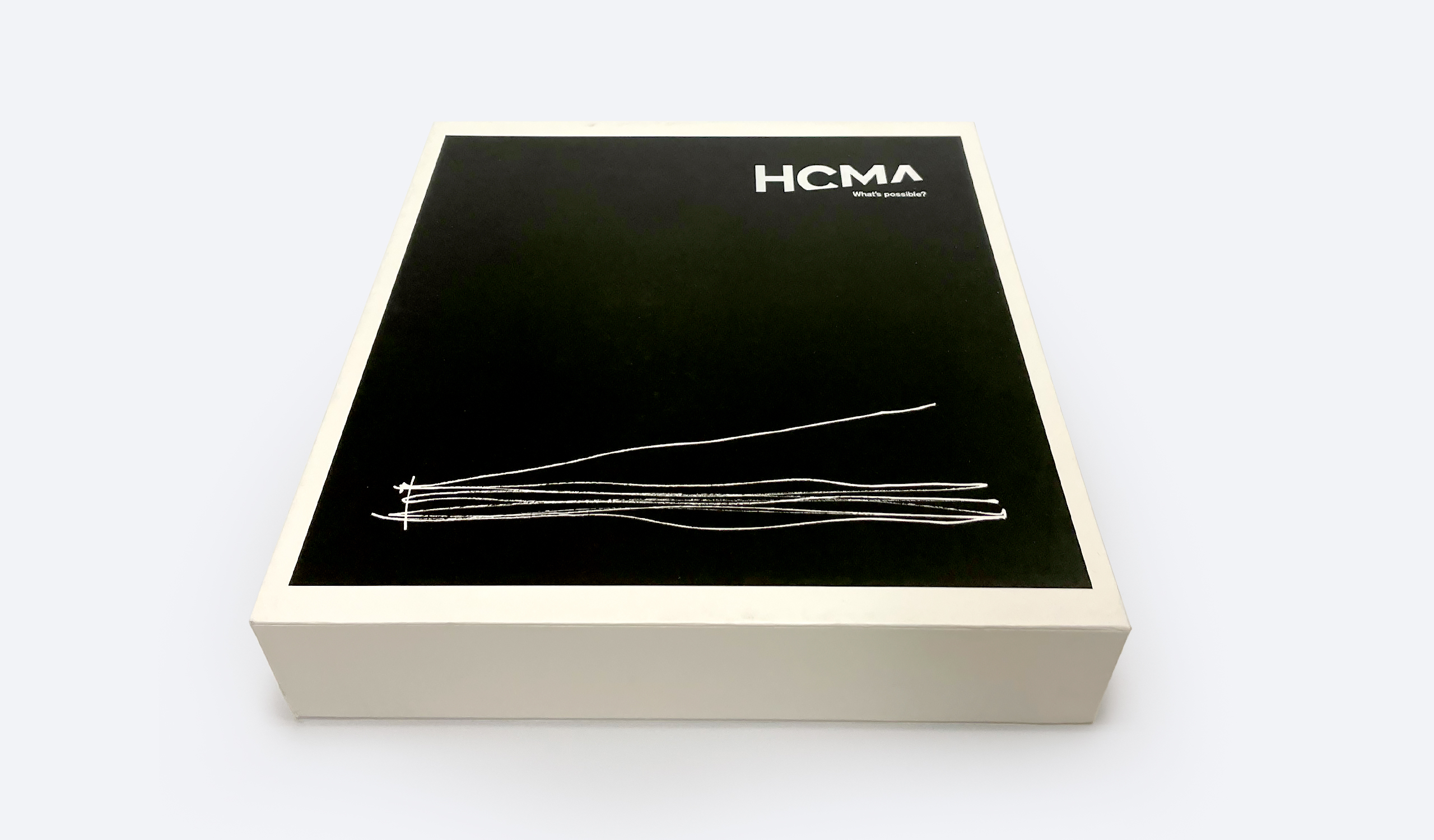 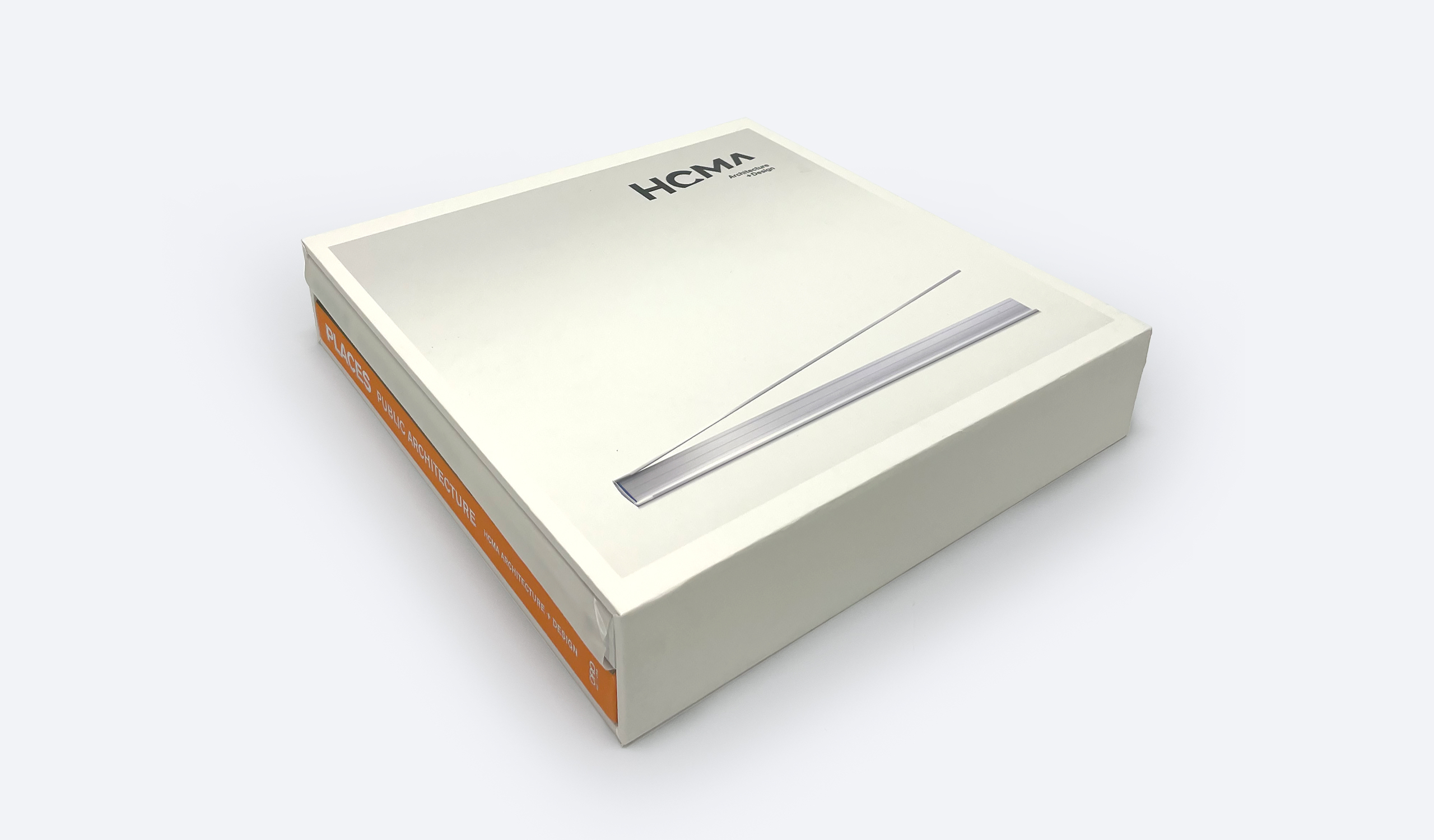 Having completed more than twelve public Aquatics Centers across Canada in the past decade, Hughes Condon Marler Architects has developed significant architectural expertise in the design of pools without having ever defaulted to a repetitive aesthetic…

“The book will be of interest to casual swimmers, as well as recreation officials, parks managers, architects, engineers and fans of leading edge design.”

Having completed more than twelve public Aquatics Centers across Canada in the past decade, Hughes Condon Marler Architects has developed significant architectural expertise in the design of pools without having ever defaulted to a repetitive aesthetic. POOLS traces the evolution of those ideas beginning at Eileen Dailly Leisure Pool all the way through to current projects being developed in Surrey, BC. Through orthographic drawings, diagrams, professional photography and editorial text the strategies employed in each project are clearly illustrated.

Pools: Aquatic Architecture showcases nine of HCMA’s most innovative facilities, its explanatory texts and 268 photographs, drawings, and diagrams make this the definitive book on the design of public swimming pools. Ranging from small neighborhood facilities to destination multi-sports complexes for the Olympic Games, the nine aquatic buildings shown here document the evolution of contemporary design thinking for this building type. This 180 page book is an unrivaled source for information on pool design, from their social ambitions to their construction features. Each example of aquatic architecture is explained in non-technical language, and with its inspiring photography and lucid drawings, the book will be of interest to casual swimmers, as well as recreation officials, parks managers, architects, engineers and fans of leading edge design. Edited by Vancouver architecture critic Trevor Boddy, the book features an Introduction and critical essays by him, plus a Foreword by pools pioneer Ron Keenberg of IKOY Architects.

HCMA Vancouver is globally acclaimed for its advanced architecture and urbanism, and Hughes Condon Marler Architects is one of its most respected and innovative design firms. Their work has earned Canada’s highest architecture award five times, and has received a key prize at the 2010 World Architecture Festival in Barcelona. The successor to a firm first established in 1976 by Roger Hughes, HCMA now includes partners Darryl Condon, Karen Marler, Stuart Rothnie and Carl-Jan Rupp, the firm has a staff of 50 in their Vancouver and Victoria offices. HCMA established an early reputation as urban housing and school design experts, and for their skills in urban design and facility programming. Their work now includes the complete range of public and private architecture, ranging from fire halls and mixed use housing projects, to university laboratory/teaching pavilions and landmark public libraries. The planning, programming and design of recreation facilities is one of HCMA’s strengths, recognized in their commission for the Vancouver Olympic Centre (now named Hillcrest) for the 2010 Winter Olympic Games, which includes curling and skating rinks, public library, daycare, gymnasium and aerobics centre plus a multi-pool aquatic centre. HCMA is dedicated to the re-conception of recreation buildings as the true community centres of the future, as inspiring visually as they are technically advanced and efficient to operate. This is the first comprehensive published showcase for their design philosophy and built accomplishments.

TREVOR BODDY
Vancouver-based Trevor Boddy is a critic of contemporary architecture, and commentator on recent urbanism and city-building. His writing on buildings and cities has been awarded the Alberta Book of the Year Prize (for the critical architectural monograph The Architecture of Douglas Cardinal), Jack Webster Journalism Prize, Western Magazine Award, the Royal Architectural Institute of Canada’s 2010 Advocacy Award, and an Honorary Membership in the American Institute of Architects, for whom he has also served as an awards juror. Boddy’s books range from the first regional study of Canadian modernism, Modern Architecture in Alberta, to Blue Sky Living: The Architecture of Helliwell and Smith, a monograph on a West Coast domestic practice.
At the 2011 World Congress of Architecture in Tokyo, Boddy’s essay (for Arquitectura Viva of Madrid) on contemporary design in his country entitled “MEGA + MICRO: Canada, Innovation at the Extremes” was awarded a commendation for the Union Internationale des Architectes’ Pierre Vago Prize as the best piece of architectural criticism published worldwide in the preceding three years. As a consulting urban designer, he has co-devised architectural competitions including Surrey’s “TownShift: Suburb Into City.” His “HybridCity” essay was included in the Vancouver Art Gallery’s 2011 exhibition “WE Vancouver: 12 Manifestos for the City.” As architectural curator, Trevor Boddy produced a 2008 exhibition on “Vancouverism: Architecture Builds the City” a related site-specific construction for Trafalgar Square. It was named a marquee event for the 2008 London Festival of Architecture, then re-mounted it in Paris in 2009, before returning home to Vancouver for the 2010 Winter Olympic Games.

RON KEENBERG
One of four Winnipeg-based founders, and the last remaining principal of IKOY Architects, Ron Keenberg received his Bachelor of Fine Arts degree from New York’s Pratt Institute in 1965 and completed a Master’s degree in Architecture at the University of Manitoba in 1989, while professionally engaged in practice at IKOY. Keenberg’s approach to architecture involves a process of resolving a set of five constructive components and has driven his architecture to economically produce highly textured, delightful social places.
IKOY Architects received the Royal Architectural Institute of Canada’s first Firm Award in 2002. Significant projects include the Harbourview Recreation Centre (1982), The Northwest Leisure Centre (1984) in Regina, the Auto/Diesel Shop at the Red River Community College (1984), the RCMP Forensic Labs (1987), the Wallace Geological Sciences Building at the University of Manitoba (1988),—all projects in Winnipeg—the William Davis Computer Research Centre at the University of Waterloo (1988), Keenberg’s Central Manitoba Bird Shack (1989), the London Aquatic Centre (1990), the Canadian Forces Base Maintenance Facility in Shilo, Manitoba (1996), the National Archives in Ottawa (1996), and The School of Information Technology Engineering (SITE) at the University of Ottawa (2002). Keenberg has been the recipient of five Canadian Governor General’s Awards for Architecture, and is the winner of over five national design competitions, including the National Archives of Canada, in Quebec. His architectural career is the subject of his book Sex, Violence and Architecture, Volume 1, published in 1996 by Hushion House Publishers. 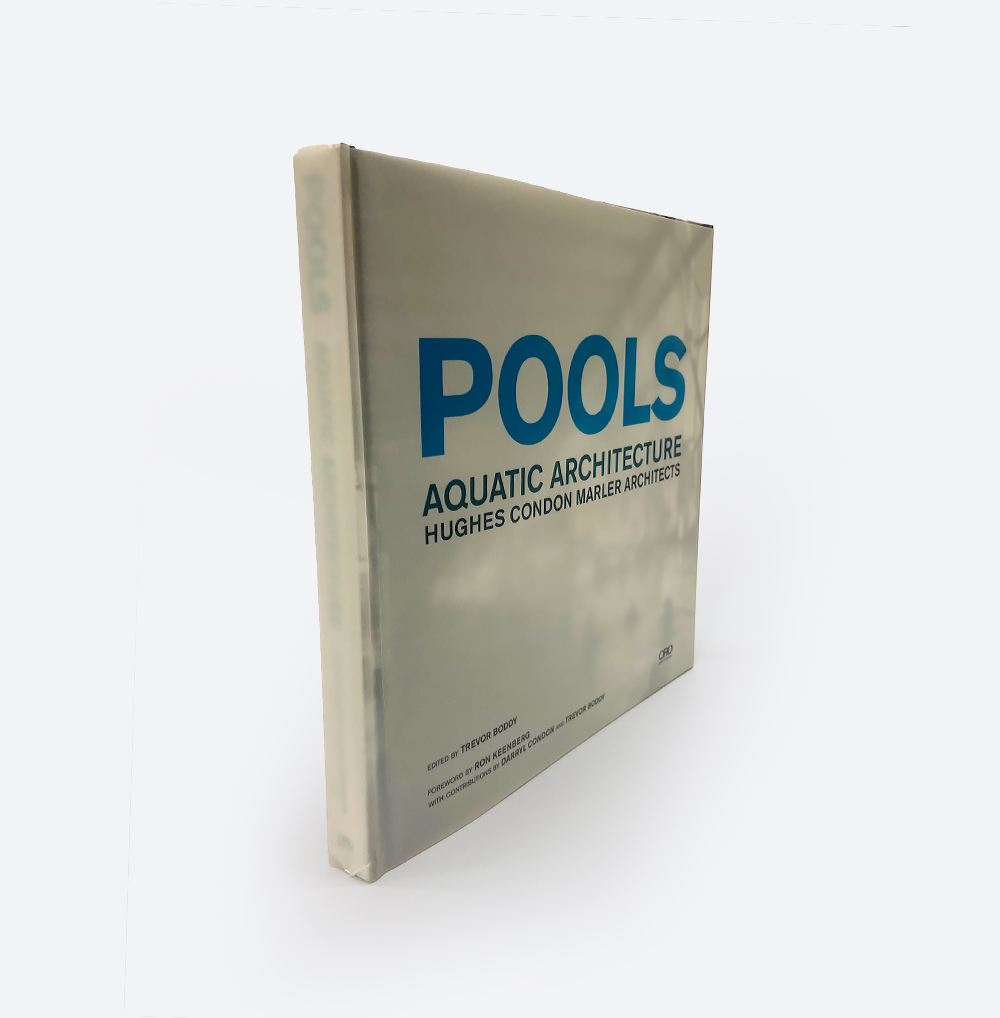 “The book will be of interest to casual swimmers, as well as recreation officials, parks managers, architects, engineers and fans of leading edge design.”